New Debonairs have been spotted on the PBE ?

Longtime rival to Master Yi, Brand owns a competing chain of high end hotels and can be seen verbally sparring with his enemy at any gala that will tolerate them. Their battles are legendary though the property damage alone skyrockets into the tens of millions. With a blisteringly fashionable custom suit, the plans for which he burned, Brand stands on the precipice of something he has long thought beyond his reach: defeating his rivals and standing atop the greatest aristocrats in the world. 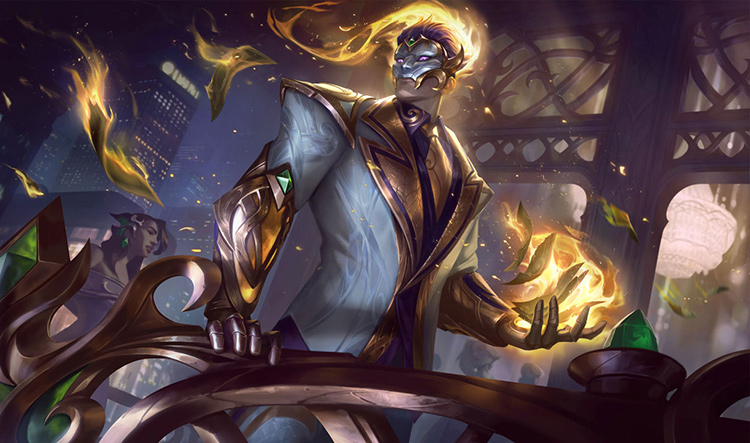 Seemingly at every event in the city at once, LeBlanc is a ubiquitous presence throughout the strip– her unparalleled ability to shmooze matched only by her mysterious origins. There was a time when certain naysayers connected her to Crime City, but as they say… never cross Lady LeBlanc. An enforcer at the exclusive Solari resort, Leona spends her days brutally ejecting unruly patrons from the premises and her evenings schmoozing up the city’s ultra-wealthy. Even the rich and powerful know not to trifle with the Solari’s chosen, lest they find themselves soaring out of the penthouse suite and down into the sidewalk. An associate of LeBlanc’s from her days in Crime City, now established as a mover and shaker in his own right. While the two cross paths on occasion, Malzahar has certain… outside interests to consider, and those business partners have promised him more than any mortal could ever dream of.

A powerful businessman of few words, often seen staring down on “his” strip from the comfort of his posh presidential suite. Despite his cold demeanor, Yi enjoys the finer things in life, and demands only the finest fits for his world-famous evening attire. The most powerful (and powerfully dressed) man in Nox Vegas, Zed has been dabbling in more than fancy parties and cutthroat dealmaking. A new crowd from Crime City has entered his inner circle, granting this debonair gentleman an unbreakable stranglehold over the strip and a dreadful new change in both mind and body.