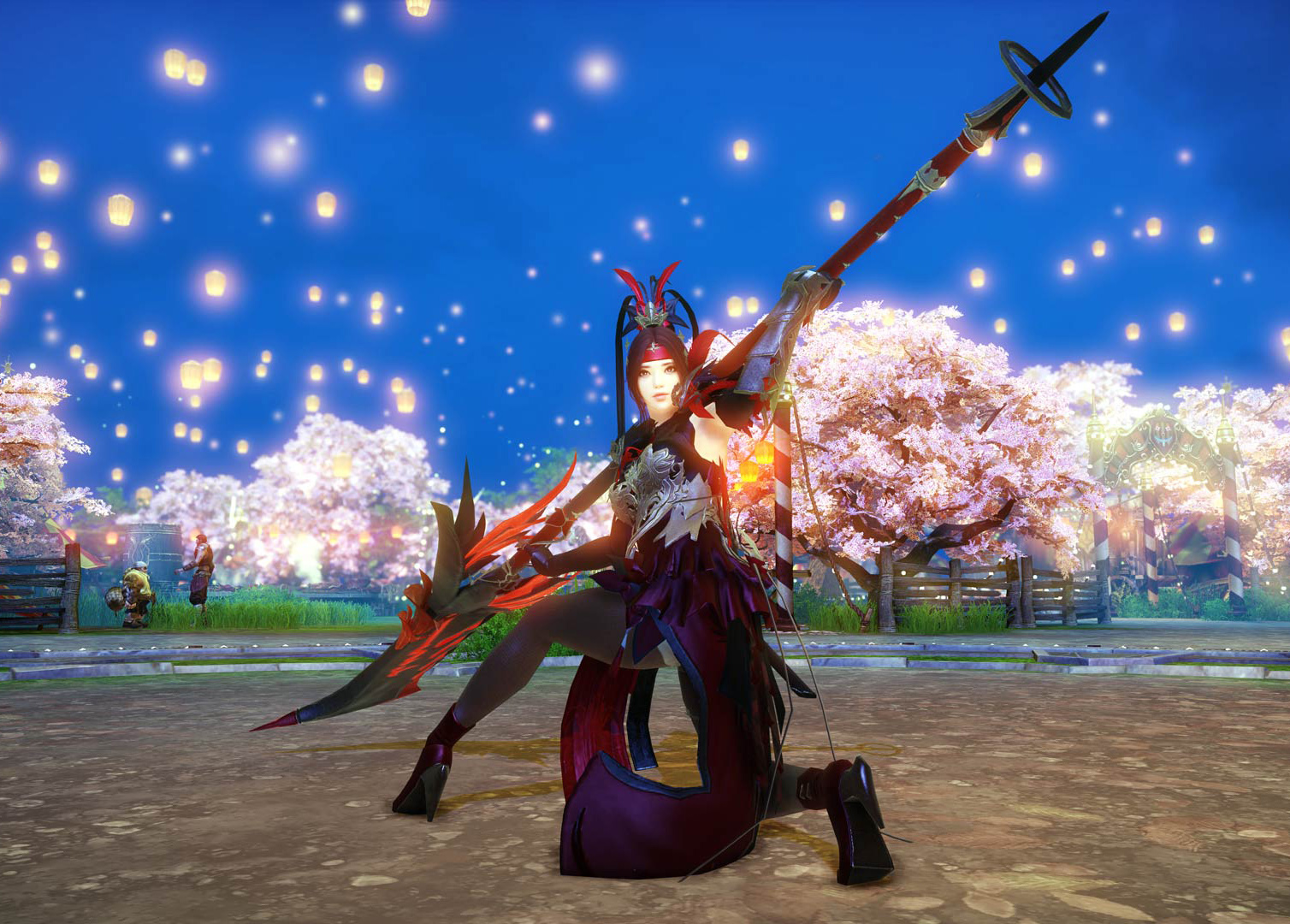 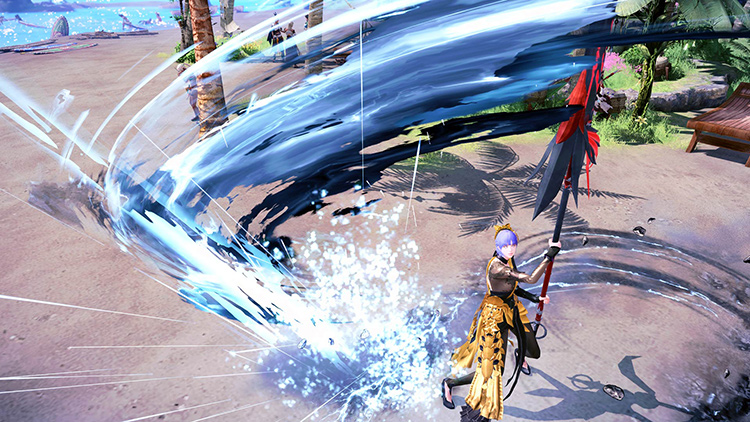 The Glaivier has two distinct skill sets which can be swapped between Focus and Flurry with each stance and skill set represented by one of her two weapons. The shorter spear is used to unleash a furious barrage in the Focus stance, while the longer glaive harnesses the Flurry stance for gracefully lethal strikes and sweeping attacks.

While certain builds may focus your attention onto one of these weapons, an effective Glaivier can maximize their potential by creating balance between the two stances, building up energy in one stance which grants an impactful stat-boost when swapping to the other.

While you can press [Z] at any time to swap weapons and change between the Focus and Flurry stances, the Glaivier’s specialty is her “Dual Meter”. Over time, and as you hit enemies with skills, your Dual Meter will charge, filling up three segments.

When you swap, the meter energy you’ve accumulated will be used, granting increasingly powerful boosts corresponding to the meter level that you’ve reached. These bonuses are based on the stance you’re swapping to.

Swapping from Flurry to Focus:

Swapping from Focus to Flurry: 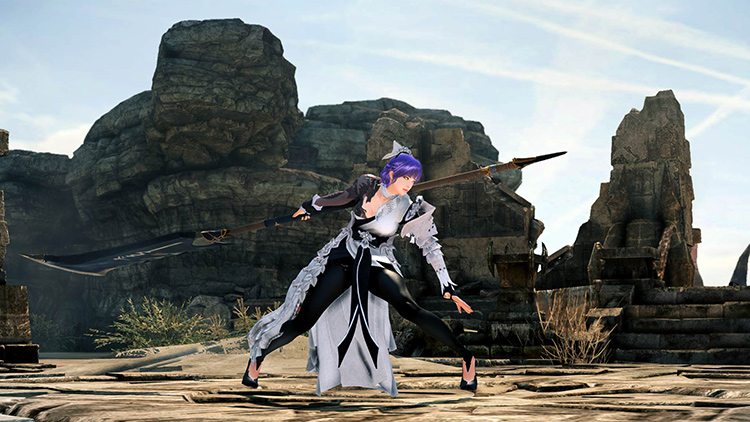 Like all Advanced Classes in Lost Ark, the Glaivier will have two class-specific Engravings, each based around a different playstyle.

Continuing and enhancing the stance swapping nature of the Glaivier, the Pinnacle Engraving replaces the Dual Meter Stage 3 effect, granting increasingly powerful bonuses as you progress through the three levels of Engravings.

Not a fan of stance swapping, but still want to play the Glaivier? This is the Engraving for you. Control disables the Focus stance, but increases the damage of Flurry skills by 18% at level 1, 27% at level 2, and 36% at level 3. While you’ll have access to fewer skills, and no swapping for bonuses, this damage increase will help you pack a punch.

Final tip – excited to play the Glaivier? Give it a head start with the new Powerpass!

In the April Update, a Feiton Powerpass will be granted to all players’ accounts to accompany the release of the Glaivier. The Feiton Powerpass will function like the Vern Powerpasses available to players in the launch version of Lost Ark— once you’ve completed the storyline through that continent, you’ll be able to use it to bring an alternate character to that point in the game.

If you’ve completed Feiton already, you’ll be able to use the Powerpass on your new Glaivier right away (or another character, if this lethal Martial Artist isn’t your cup of tea). If you haven’t made it to Feiton yet, but are getting close on your main character, it might be worth pushing through so you don’t have to start from scratch on your new Glaivier unless you’d like to experience the main storyline again! 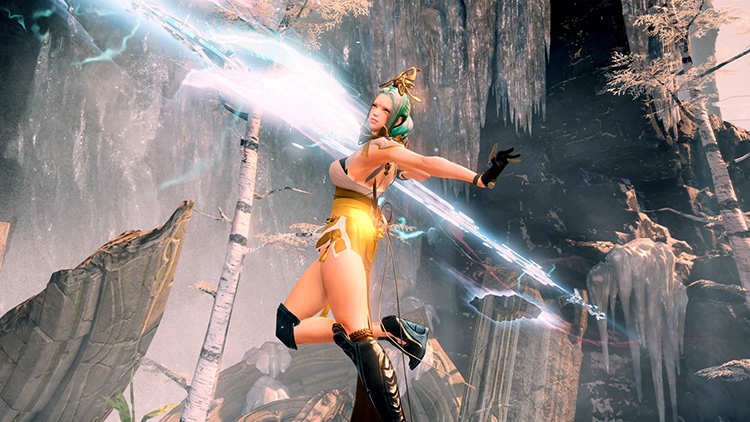 Stampeding Slash: Madly brandish your spear while moving forward, inflicting damage 3 times, followed by a finishing blow that inflicts damage. Airborne foes are launched in the air again when hit.

Wheel of Blades: Spin sideways, inflicting damage 3 times, followed by a finishing blow that inflicts damage. Airborne foes hit by the spinning attack are launched in the air again, and then get slammed to the ground with the last blow.

Flash Kick: Use your spear as a lever to advance forward, inflicting damage 3 times, followed by a strong kick that inflicts damage.

Vault Stick: your spear in the ground and do a somersault, inflicting damage and launching foes into the air.

Half Moon Slash: Drag your spear across the ground while moving forward, inflicting damage 2 times, followed by a diagonal upward slash that inflicts damage. Hit foes are launched in the air.

Shackling Blue Dragon: Spin your spear where you stand and strike down with force, creating a shockwave that inflicts damage. Foes hit by this skill will see a decrease in Crit Resistance.

4-Headed Dragon: Thrust your spear 8 times in front of you, inflicting damage, followed by a finishing thrust that inflicts even more damage.

Thrust of Destruction: Gather energy onto your spear, inflicting damage to foes at close range, then thrust forward, releasing a beam of energy that inflicts damage while knocking foes back.

Starfall Pounce: Jump within range of the target location and create a shockwave as you land, inflicting damage and launching foes into the air. You can change direction before you land.

Dragonscale Defense: Block attacks from the front with your spear, negating damage in proportion to your Max HP. If you successfully block an attack within 1.1s, thrust your spear forward for damage 2 times.

Red Dragon’s Horn: Hold the skill hotkey to focus your mind and gather energy, then aim and thrust your spear toward a foe within a 12 meter radius at a 90 degree angle, inflicting damage. Hit the perfect Zone to extend the attack range up to 16 meters, inflicting damage and knocking foes back.

Perform an attack at the target location. Leap backward while facing forward, focus energy onto your spear, and throw it at the target area. The spear strikes the ground to inflict damage, then causes an explosion that inflicts damage, knocking foes back with the last hit.