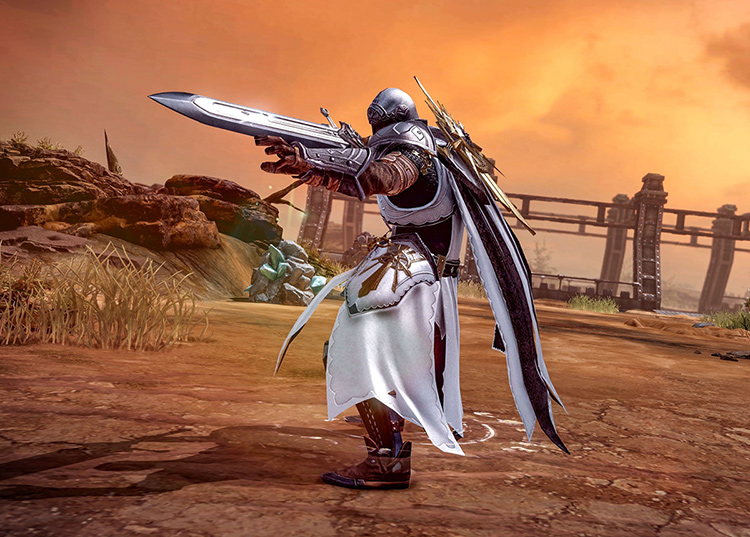 Here is a few planned new features that will be available at launch.

While Closed Beta allowed you to visit Rohendel for the first time, at launch you will be able to traverse even more of Arkesia’s vast lands! The Yorn region will be open for exploration.

In Yorn, you’ll find yourself headed underground to the home of the Umar race, a group of dwarven people that inhabit the depths below the seemingly barren land. The Umar artisans are known for their craftwork, so be sure to take a moment to enjoy the carefully constructed architecture that has resulted from hundreds of years of building work before you get to back to looking for the Ark.

In addition to Yorn, the continent of Feiton has also been added for launch.

You might find Feiton to be a little bit… less than welcoming. The lands of this continent were poisoned during the Chain War, and the effects of this continue to influence the landscape to this day. In Feiton, the half-human half-demon Delains reside, but only under the careful control of Avesta, a powerful assassin organization.

Punika is tropical and magical, with much to explore and experience from nature’s beauty to the festivals put on by the inhabitants. You can spend time in the vibrant and lively Nia Village, or traverse the colorful sands of Starstand Beach. The land may be lush, but watch out for the wildlife, something strange seems to be happening with the creatures that inhabit the island.

In addition to new quests and bosses, the release of Punika also means that more late-game content will be available at launch, including limited T3 content.

T3 gear will be available at launch, as well as a few core T3 dungeons to support proper progression including Oreha’s Well (Abyssal Dungeon), Chaos Dungeon Stage 3, and the Velganos Guardian Raid.

The Combat level cap has been increased to 60.

Additional T3 content will be added to the game post-launch in order to set the pace for player progression, both in terms of new content and optimal difficulty

173 Steam Achievements will be available in the game at launch. These mirror some of the achievements you’ll find in-game (although there are many more to unlock in-game as well!)

Character creation now includes an option to select a voice for your character. Each class has 3 – 4 options to choose from!

Players will be able to select the option to use the original Korean voice over in game along the subtitles of their choice. This will be obtainable in a free Steam DLC pack at launch. Korean subtitles will not be available.

During Beta, we gathered lots of feedback from players about the early game experience. While we want to continue to improve the first time experience for new players, one of the changes we made before launch is that a number of cutscenes (with the exception of some important pieces of the story) are now skippable, even the first time you play through them. Whether you got your fill of story time during the Beta, or are just more interested in powering through to the end of the game, this will save you a little bit of time if you wish.

Balance tweaks for pacing of the game

Another huge point of feedback that we received during the Closed Beta Test was that many players felt like some of the game’s pacing and gearing was not quite challenging enough. We’ve worked to make balance changes to combat this, and while it won’t slow you down early on, the endgame content will prove to be a bit more challenging for players.

Server Reset Times (Daily, Weekly, Bosses, Events, etc.) are per Region. Daily and weekly resets will be done at 1AM (or 2AM, depending on Daylight Saving Time and the regional time where the server is located) or after any scheduled downtime is completed. Core content such as raids, dungeons, and PvP events will maintain the best local hours by applying the following times offset calculated from each region’s 0 hour.

This means that a dungeon meant to open at 7PM on server time (UTC) will be open for US West 7 hours later to make it more playable/accessible for US West players. The same goes for every region using the timings listed above.

It is also worth noting that the in-game UI will display server time, not a player’s local machine time. For example, US West will display Pacific time for all players to reflect the server’s time.

Please note that after the game is launched, server reset times may be adjusted slightly to best fit player and server needs.

This is the list of servers that will be open for players to select, beginning from the Head Start on February 8th. Additional worlds may be opened based on population levels.

What are the Character, Stronghold, and Guild Naming restrictions?
The following are restricted: Special characters (!@#$%, etc.), capitalized letters other than the first letter of the name (e.g., McFly, WeIrDoGuY), and spaces.

How does character name reservation and deletion work? How long after I delete a character until it is available again? Do I need to play with a character in order to reserve the name or just create the character?
Completing the character creation process will reserve the name for that character. Character names are not automatically released again after character deletion. Releasing names for re-use is a manual process that we will likely run at some point in the future but it is not something we expect to do regularly or start doing in the near future.

Will character voice selection be available at launch?
Yes, you will be able to select a voice for your player. Each class will include 3 – 4 options for you to choose from!

Is it possible to stack Founder’s Packs for multiple rewards?
Players can buy 1 of each Founder Pack which will stack, meaning they will receive all of the contents they purchased in each pack. The only things that will not stack are the 3-day Head Start, and the Founder’s Title (which is the same title for each pack).

How will you receive your Founder’s Pack contents, and for what classes are they available?
Founder’s Packs will be delivered to your Product Inventory, and from here you will be able to obtain the contents when they are directly delivered to your character’s inventory. But sure to open the your Northern Lawmaker or Platinum skin chest with the character you want to use it on, as the skin will be set to match this character’s class! These skins will only be usable on the 15 classes that are available at launch.

What happens if your Guild Leader doesn’t log in for weeks?
If the Guild Leader has not logged in after ten days, there is a system that can be used to promote the Deputy of the Guild to be the new Guild Leader.

Will players be able to get content or rewards from events that occurred in KR/RU over the last few years, that were time-limited there?
Some of these items may appear in our version of the game for various events or happenings in the future.

Will players be able to change the font in-game?
The in-game font type and size cannot be changed, however the font size within text chat can be changed.
In the case of damage numbers being unreadable on high resolution monitors, this is a known bug that is currently out for a fix.

Rather than having Roster based PvP rankings, can it be character based?
We don’t have plans on changing this for launch, but player feedback on the game is always welcome.