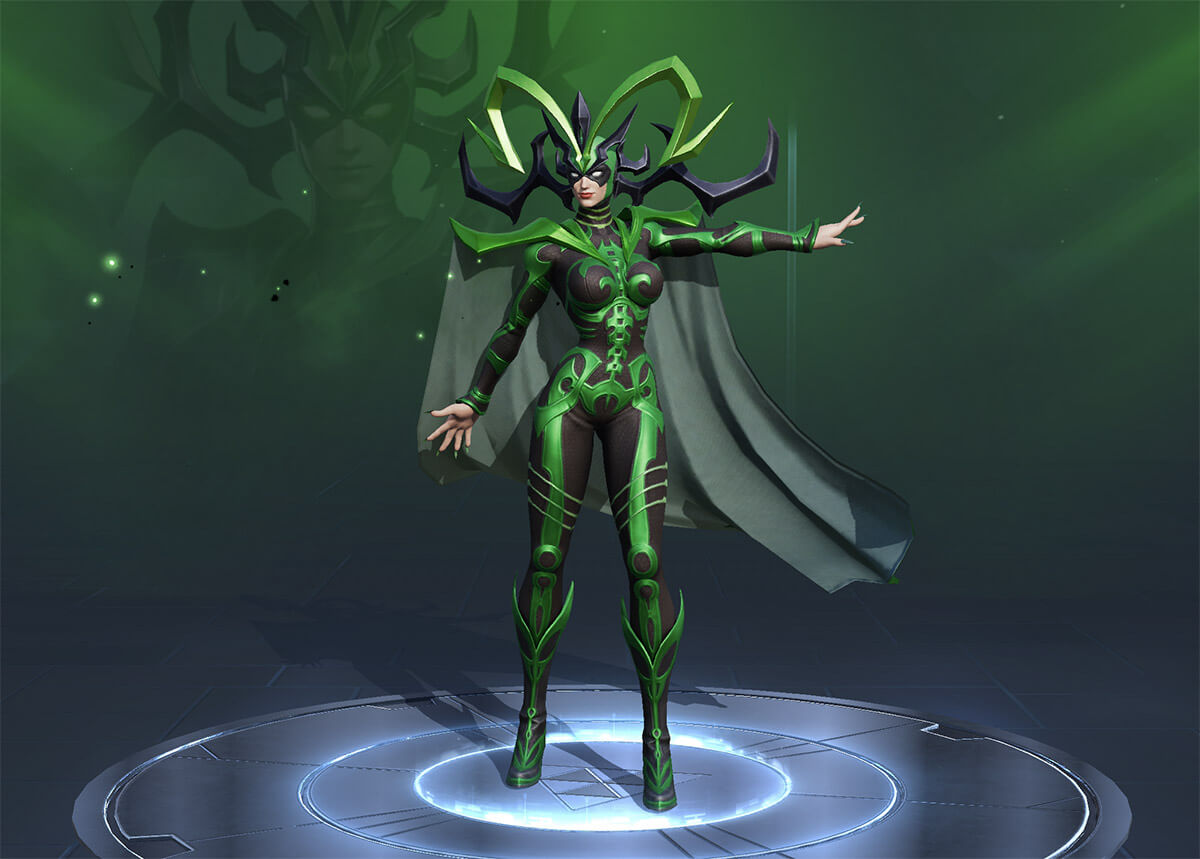 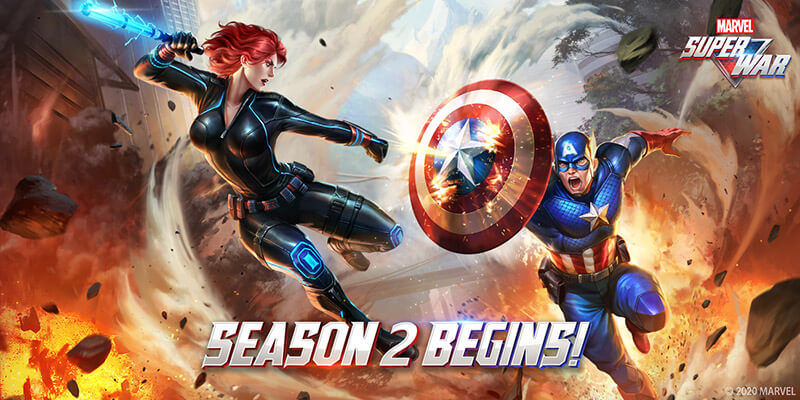 Season 2 will begin after maintenance on April 9th, 2020. Please take note of the following content:

At the start of Season 2, the starting tier for all Watchers will be based on your final tier at the end of Season 1 and will be inherited accordingly.

Watchers who win 10 Ranked Matches and reach the Immortal Gold tier during Season 2 will get Ant-Man’s exclusive Season 2 skin: The Adjuster. 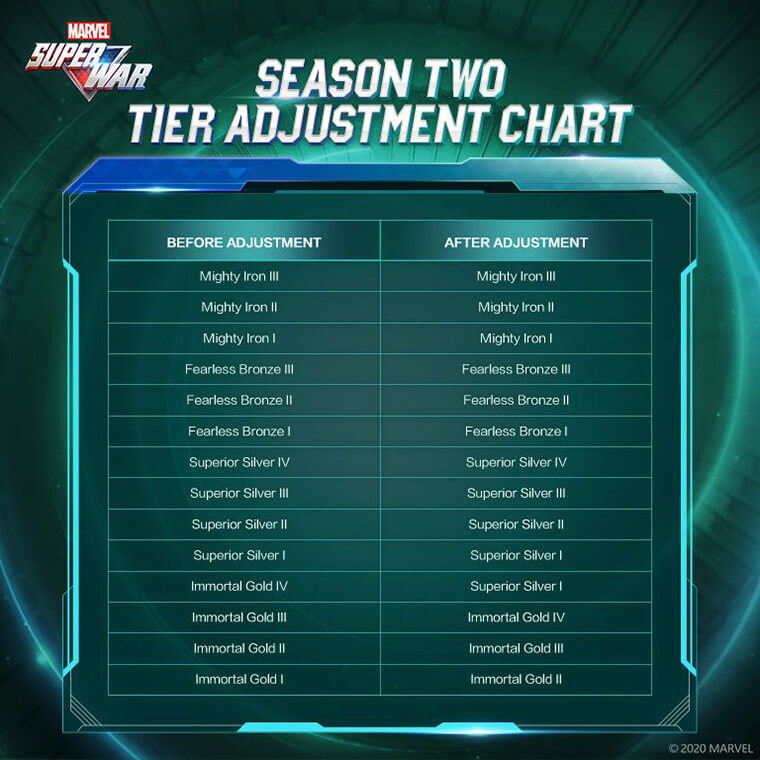 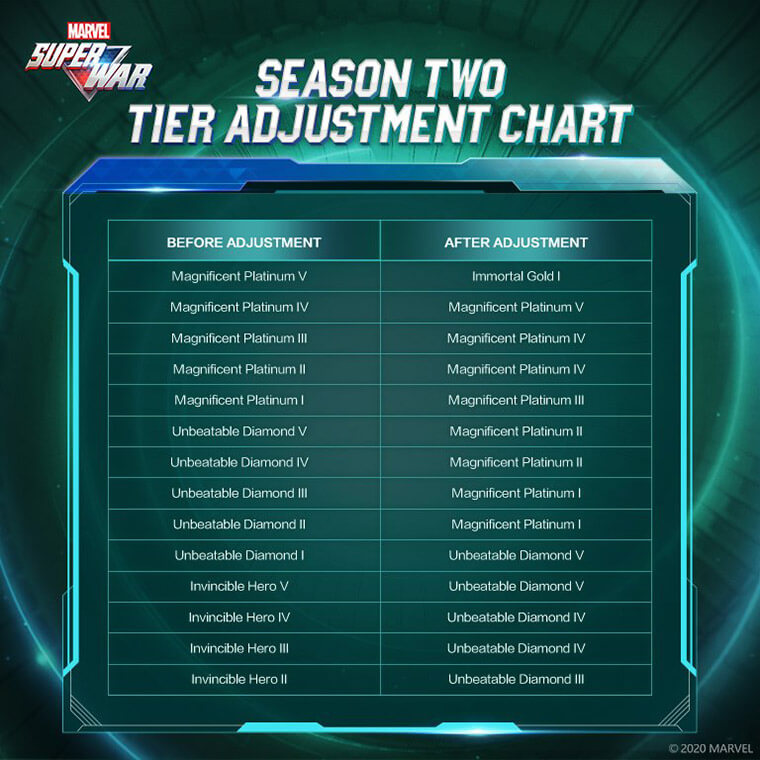 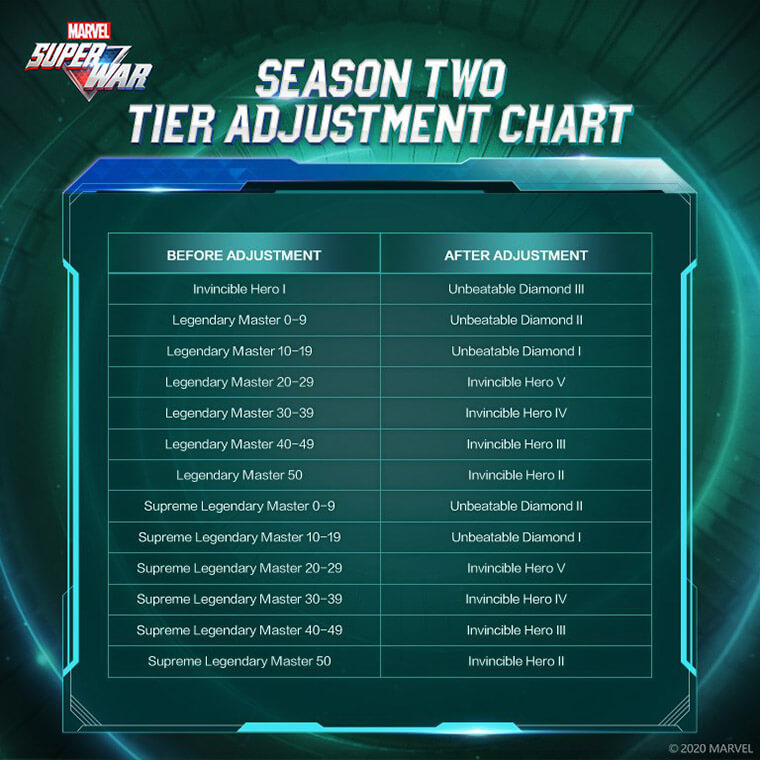 On April 9, 2020 (Thursday) at 5:00 AM, the new roster of heroes that are free to use in 5v5 battles will be: Angel, Deadpool, Groot, Human Torch, Iceman, Lady Sif, Quicksilver, Rocket Raccoon, Storm, and The Thing. Go forth into battle, Watcher!

Hela is an energy hero. She can not only unleash and absorb death energy but also summon undead warriors to assist her in battle. 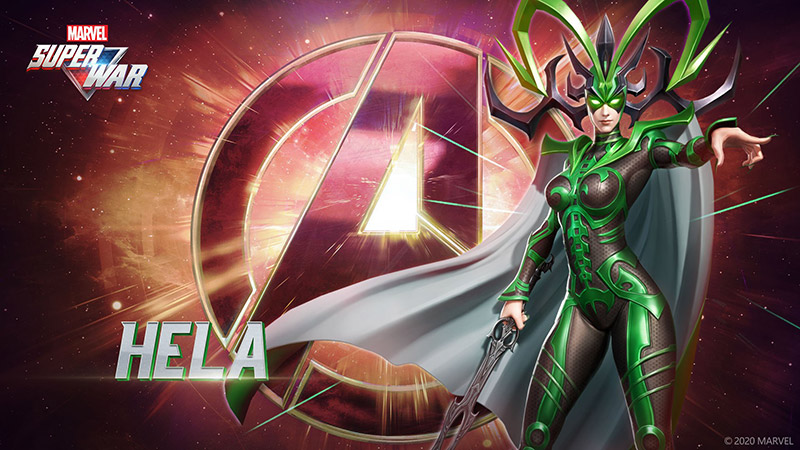 Passive: When Hela’s basic attack strikes an enemy hero, she adds death energy onto the target. The target receives damage if they leave the fight. If the target is KO’d, Hela recovers HP.

Passive: When Hela strikes an enemy hero, she gains a mark. At full marks, she summons her Nightsword and attacks surrounding enemies, adding death energy.

Active: Hela increases attack speed and movement speed. She can use basic attacks while moving.

Hela releases an energy orb in the specified direction, dealing damage to struck enemy heroes while adding death energy. A field of thorns appears, stunning enemies who cross the edge of the field.

Hela summons an undead warrior in the specified location, dealing damage to enemies within range while adding death energy.

Hela summons an undead warrior in the specified location, dealing damage to enemies within range while adding death energy.

The undead warrior’s basic attacks grant Hela a mark while it takes damage in Hela’s place.

All Hela data has been collected. She will be joining you all in battle this week, and her skin, Ultimate Hela, will be added to the Shop.

From today until 11:59:59 PM on April 15th, all watchers can purchase the Hela Data Pack, as well as recruit this hero and unlock her skins! There’s even a 20% off discount on this pack in its first week!

Mister Fantastic’s combat capabilities are weaker than most fighter heroes, so we’ve adjusted him to make him stronger.

Yondu has a slight advantage compared to other marksman heroes, so we’ve made adjustments to his attack speed usage efficiency. We also weakened the control capability of Ability 1.

Yaka Charge: The physical attack converted from every 1% of attack speed has been reduced from 2 to 1.25.

Yaka Arrow: Stun duration has been reduced from 1 second to 0.75 seconds.

Black Knight’s burst damage is greater than expected, so we’ve made some adjustments.

Spider-Man’s damage is slightly lower than other assassin heroes, so we hope to improve his combat capabilities by increasing his damage. 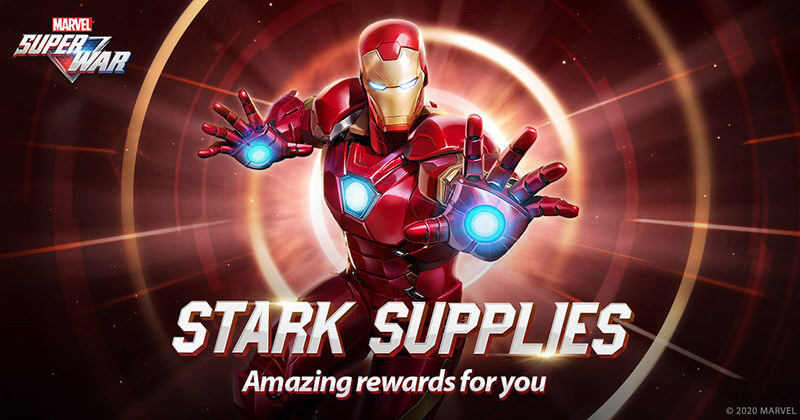 Stark Industries is granting all Watchers a development fund. This fund grants 1 reward every hour and can store up to 12 rewards. Fund rewards are primarily Coins and Crystals, but there’s also a chance of getting an additional random reward.

Event Duration: After maintenance on April 9th, 2020 to April 22nd, 2020 23:59:59 Captain Marvel, Deadpool, Ebony Maw, Magneto, and Star-Lord, along with their corresponding skins, will be available at a 30% discount for a limited time.

The Dark Star Five-Pack is now available at a 20% off discount! All Watchers are eligible to purchase a maximum of 10. 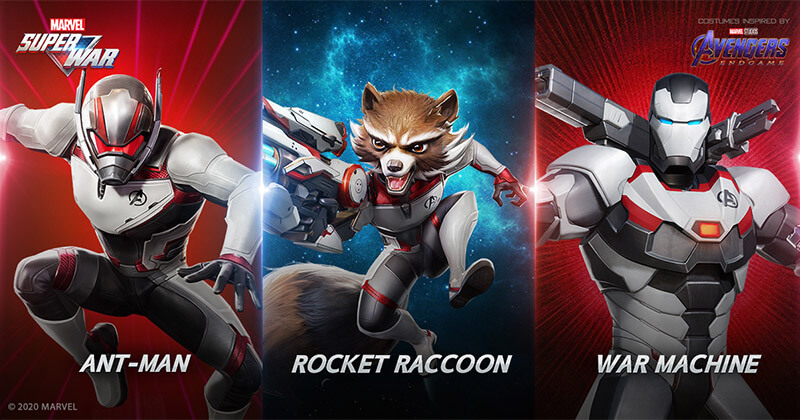 Ant-Man, Rocket Raccoon, and War Machine skins inspired by Marvel’s Avengers: Endgame will be available for a limited time. During this period, purchase a single skin at a 30% off discount, and enjoy a limited-time buy-two-get-one-free deal. Don’t miss out!

This series of skins will only be available for purchase during the event. Once the event has ended, you will no longer be able to purchase them.

We’ve compiled the latest battle report and prepared supplies for watchers returning from their breaks. Accumulate logins and complete the designated quests to claim awesome rewards! 7. Battleground Recruitment Event Duration: After maintenance on April 9th, 2020 to May 6th, 2020 23:59:59 Share your exclusive invite code with other watchers. Once the code is linked, you can unlock exclusive quests. Collect and redeem points for permanent skins and other fantastic rewards! 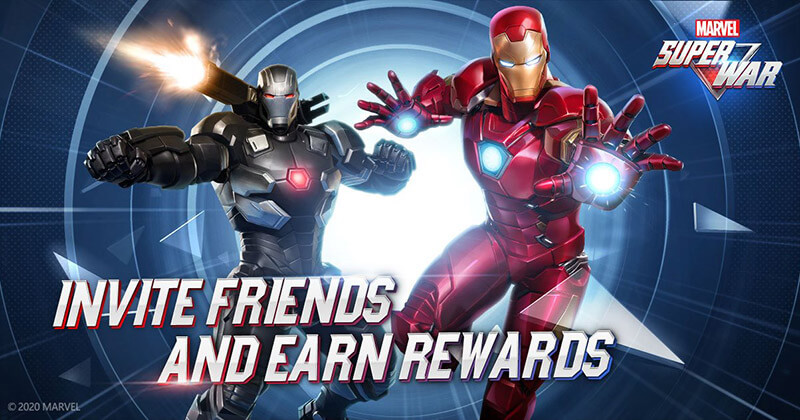 Event Duration: After maintenance on April 9th, 2020 to May 6th, 2020 23:59:59 Returning watchers can earn generous prizes by using and linking the invite codes. New watchers will have a chance to claim the permanent hero – Black Panther! 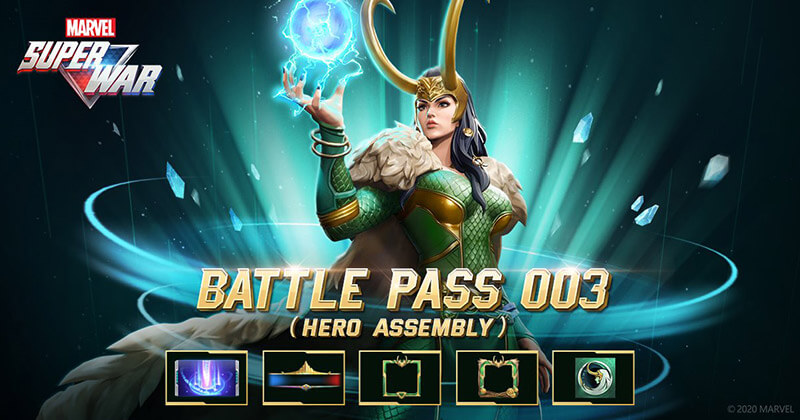 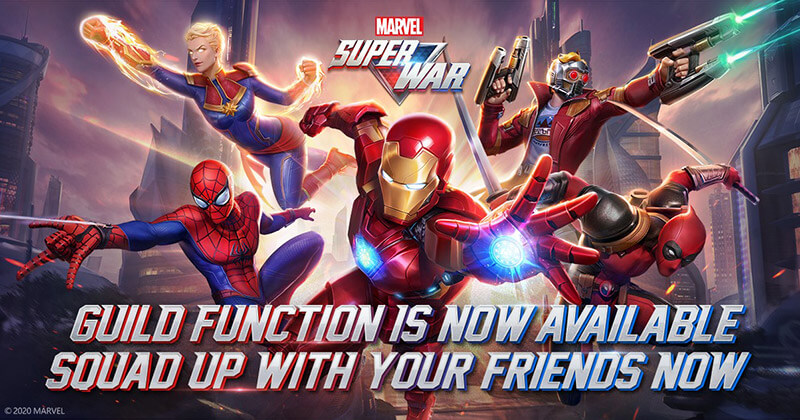 Guild Teamfight: Available at a fixed time every week. The Guild Leader can register and participate in the Guild Battle with their guildmates. Win to receive Guild Honor! The first season of Guild Battle will begin on April 20th. Each season will last for 4 weeks, and once the season is over, season rewards will be issued according to the Guild Honor rankings.

Guild Shop: Watchers can use Guild Contributions to purchase items at the Guild Shop, including Coin Packs, Crystal Packs, Hero and Skin Trial Vouchers, and more!

This season, we have expanded the area of the brush and adjusted the distribution and position of the brush.

Teleportation cooldown has been reduced from 180 seconds to 120 seconds.

Optimized the smart casting logic of Paralyze, altering it to select the target closest to you, and increasing damage reduction from 40% to 60%.

Speed boost has been changed to gradually increase until it reaches its maximum value, and the maximum value has been increased from 30% to 40%.

The duration of Reveal has been increased to 30 seconds. When enemy heroes enter the reconnaissance area, the effect will end, and that hero will be marked. 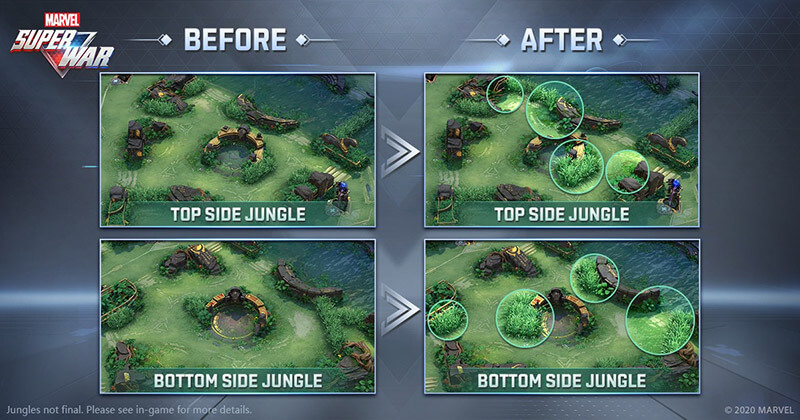 Minions summoned by the Cloning Device will gain increased movement speed and 50% damage reduction. When minions approach an enemy turret, this effect will disappear.

Adjusted the tier margin in which the Fearless Bronze, Superior Silver, and Immortal Gold tier players can cross while teaming up.

Fixed an issue with Loki’s Ability 2: Frosty Lineage in which the circle indicating the cast range and the actual cast range didn’t match.

Fixed a duration error in the description of Mister Fantastic’s natural passive.

Adjusted the point ranges for Game Conduct privileges. We also adjusted the judgment and penalty for going AFK, making it stricter. We hope all watchers will help us foster a fairer and more enjoyable gaming experience.