The MARVEL Super War July 14th 2022 Update sees new hero Hulkbuster will be joining you all in battle this week. 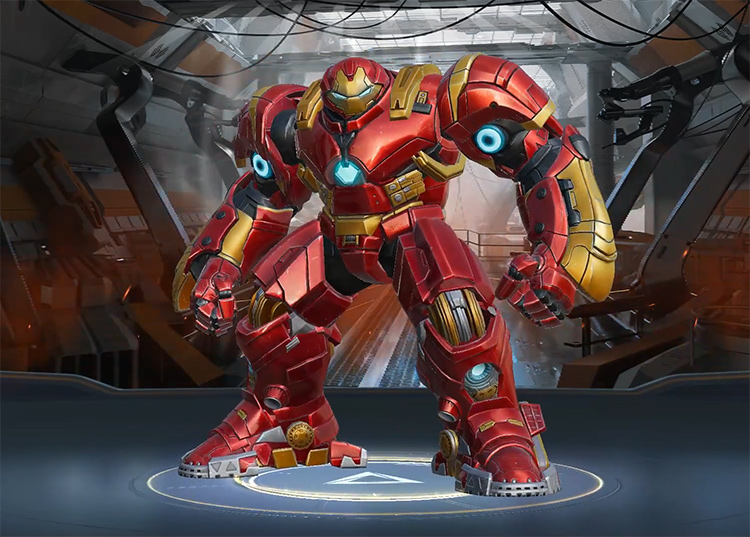 As the Anniversary Celebration kicks off, all heroes are free to use (including Thanos and Phoenix) between July 14th, 2022 (after maintenance) and July 17th, 2022! Fight to your hearts’ content, Watchers!

At the start of Season 11, the starting tier for all Watchers will be based on their final tier at the end of Season 10 and will be inherited accordingly.

At the start of Season 11, Watchers will receive Crystals and an Avatar Frame according to their highest tier in Season 10.

Match data for Season 11 will be added to Season Moments at the start of Season 11.

Hulkbuster is a Tank hero created by Tony Stark. He possesses incredible offensive and control capabilities, and can also switch between modules to respond to different combat scenarios and incoming attacks.

Passive: Hulkbuster’s A.I. System provides him with 3 modules. Hulkbuster can equip 2 modules at once in the Primary Slot and Secondary Slot, granting him enhancements to Ability 1 and Ability 2.

The module equipped in the Primary Slot will provide different enhancements to Hulkbuster.

Passive – Battery Powered: Casting an ability will consume energy from the Primary Slot. When the battery is fully drained, Hulkbuster’s special basic attacks and abilities will not receive enhancements from the module.

The module in the Secondary Slot and the spare module will replenish energy on their own.

Enhancement: Hulkbuster deals extra damage to targets at the center of the impact and inflicts a Break effect.

Active: Hulkbuster raises his shield in the specified direction, reducing incoming from that direction. He also receives acceleration and a shield.

Enhancement: While raising the shield, Hulkbuster has Control Immunity and his counterattack inflicts Stun instead of Slow.

Active: Hulkbuster slams the ground in the specified direction and creates a fissure. When the fissure hits an enemy hero or reaches its farthest point, the ground will collapse, dealing damage to nearby enemies and inflicting Slow.

Enhancement: Enemies within the fissure will slide toward the center and take damage.

Primary Enhancement – Defense Module: Hitting an enemy hero with this ability provides you a shield.

Primary Enhancement – Control Module: Hulkbuster launches up enemies in the center of the impact.

Hulkbuster raises his shield in the specified direction, reducing incoming from that direction. He also receives acceleration and a shield.

Primary Enhancement – Attack Module: Hulkbuster refreshes Ability 1 after lowering the shield and allows it to be cast again without channeling power.

Hulkbuster slams the ground in the specified direction and creates a fissure. When the fissure hits an enemy hero or reaches its farthest point, the ground will collapse, dealing damage to nearby enemies and inflicting Slow.

Primary Enhancement – Defense Module: Hitting an enemy hero will launch missiles toward the fissure and restore his own HP.

Onslaught – Primary: Hulkbuster charges to the specified location and pummels nearby enemies, knocking down enemy heroes at the center of the attack and inflicting a Break effect.

Hulkbuster channels power for a short duration before flying toward a specified location, dealing damage to all enemies in his path and nearby enemies where he lands.

Primary Enhancement – Defense Module: Hulkbuster provides a shield to himself and friendly heroes where he lands.

Primary Enhancement – Control Module: Hulkbuster summons 6 walls from above at the specified location, forming a hexagonal cage. Each wall emits electroshock when it lands on the ground, dealing damage to nearby enemies.

Hulkbuster then charges toward the cage, dealing damage to all enemies in his path and nearby enemies where he stops. Hulkbuster also gains damage reduction.

All Hulkbuster archive data has been collected. He will be joining you all in battle this week.

Hulkbuster has been added to the Brilliant Casket Collection Chamber. Watchers will be able to recruit this hero with Bright Crystals.

We have enhanced Falcon’s Ability 1 to improve his ability to clear minion waves in the late game and allow him to hold the lane more easily.

Cooldown has been reduced from 8 seconds at all levels to 7 seconds.

Vision’s late-game damage is weaker than heroes of the same type. Therefore, we’ve increased the scaling from gear for his Ultimate to give him more room to shine.

We have increased the base damage of Magik’s Ability 2 to improve her survivability during the laning phase.

Ghost’s performance fell short of our expectations after the previous adjustments. Therefore, we have increased Quantum Corrosion’s detonation damage, allowing her to pose a bigger threat to the enemy’s back row heroes.

Professor X’s Ability 1 and Ability 2 combo makes him an overpowered character in the hands of experienced players. Therefore, we have slightly reduced the ability’ base damage to reduce his control and burst capabilities.

Wolverine’s new Phoenix Nirvana skin is available for a limited time! Come and get yours starting July 14th, 2022 (after maintenance) and save 30% before July 20, 2022.Don’t miss out!

That’s not all! Purchase the skin during this period and receive 10 Brilliant Caskets in your mailbox. Don’t miss out!

Cull Obsidian’s new Space Obsidian skin has been added to the Dark Star Collection Chamber. Watchers will be able to redeem this skin starting July 14th, 2022.

Hulk’s new Immortal Hulk skin will be available soon! Come and get yours starting July 14th, 2022 (after maintenance). Watchers may exchange the skin for free with Bank Tokens, so don’t miss out!

The new game mode, Hulkbuster Awakens, will be available for a limited time after the update!

Select Hulkbuster Awakens in the lobby to participate in this limited-time game mode.

The enemies gain various forms of energy from the erratic fluctuations in the Multiverse. Watchers must respond with different strategies.

Collect energy orbs scattered across the Wakanda Arena to recharge Hulkbuster. Hulkbuster can only be piloted after he’s fully recharged!

Fight alongside your friends and drive off the enemies!

We’ve added a new conversion option for Watchers converting an obtained skin or hero. Watchers may choose to convert them into Crystals or Gatherers’ Microchips.

The Preview Archive from Fortune’s Favor has been reset. Each Watcher has a chance to preview 10 draws for free.

This update will not affect the Skins, Heroes, and Trial Vouchers in the Event Inventory. All Lucky Talismans and Lucky Ingots will be converted into the equivalent amount of Security Keys and Gatherers’ Microchips.

Complete S.H.I.E.L.D. quests to increase your Battle Pass Level and unlock supply rewards! Spend 428 Star Credits to unlock the Special Supplies and claim them according to your current level.

Enabling the Graffiti feature in Archive – Battle Settings will allow you to graffiti the battlefield if you have Spray Paint on you! (Not applicable in Training Mode.)

Watchers may also disable this feature in Settings – Screen Settings.

Read the story behind each gear from the Intel Records in Archive – Gear Archive.

Hulkbuster has been added to the Brilliant Casket Collection Chamber!

Send your wishes to claim the 1-year Anniversary Avatar Frame, a Bouquet, and more!

Watchers can interact with the NPCs in Street Sports Summer! Speak with F.R.I.D.A.Y and Stark Robot to claim easter egg rewards!

Purchase a Weekly Card to receive a 55-Star Credit rebate and claim sign-in rewards for 7 days!

The prize pool for Brilliant Casket has been updated. Enjoy 20% off for a limited time!

During the event, you can get 2 Brilliant Caskets via email after logging into the game every day!

Emote Badges are now available on both chat channels.