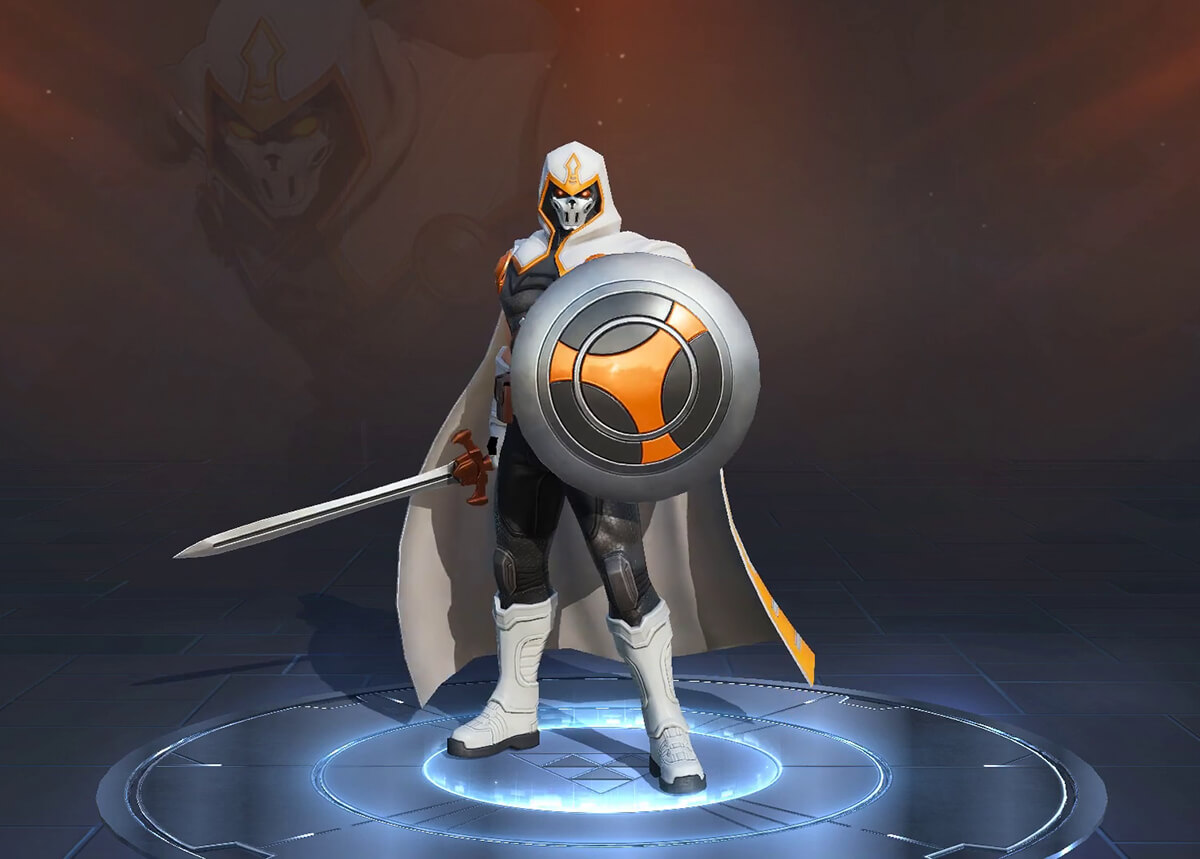 On November 5, 2020 (Thursday) at 5:00 AM (GMT+8), the new roster of heroes that are free to use in 5v5 battles are: Captain Marvel, Heimdall, Iceman, Magneto, Mantis, Proxima Midnight, Rocket Raccoon, Storm, The Thing, and War Machine. Go forth into battle, Watcher!

Taskmaster is a fighter hero who is an unstoppable mercenary villain. He can imitate his enemies’ combat moves and switch between attack patterns to defeat anyone in his way.

Passive – Bow and Arrow: When Taskmaster is in his Bow and Arrow form, his first basic attack shoots extra arrows.

Passive – Bow and Arrow: When Taskmaster is in his bow and arrow form, his first basic attack shoots extra arrows.

Combo effect: Taskmaster rolls forward and shoots a powerful arrow at the enemy with the most marks while dealing damage and inflicting slow on enemies near the target.

Press and hold the ability to charge, which causes Taskmaster to accelerate and deal damage to enemies in his path while knocking them back. At the end of the charge, he slashes in front of him, dealing AoE damage and launching enemies up.

Drag the ability button to “Reflex Kick” during the initial charge to perform a skill combo.

Press and hold the ability to charge, which causes Taskmaster to accelerate. He also automatically marks and uses 1 basic attack on targets in range every 0.5 seconds.

While charging, drag the ability button to “Photographic Rapid Fire” to perform a combo.

Taskmaster switches to his Bow and Arrow form and blinks in the direction of the joystick.

Taskmaster switches to his Sword and Shield form and slashes in all directions, dealing AoE damage.

All Taskmaster – Tony Masters archive data has been collected. He will be joining you all in battle this week, and his Tactical Suit skin will be added to the Shop.

From today until 11:59:59 PM (GMT+8) on November 11, all Watchers can purchase the Taskmaster Data Pack, as well as recruit this hero and unlock his skin! There’s even a 20% off discount on this pack in its first week!

From November 5, 2020 after maintenance to November 18, 2020 (GMT+8), take part in the “Operation: Decryption Key – Taskmaster” event and use Star Credits to crack safes for a chance to get the permanent “Marvel’s Black Widow” inspired skin. The first decoding attempt is free. All Watchers welcome!

Spend Star Credits during the event to decrypt safes and unlock rewards! Your first decryption is free!

Taskmaster’s limited Marvel’s “Black Widow” inspired skin is also hidden in one of the safes, so get cracking and earn yourself a limited edition skin!

Unlock various rewards by playing Black Widow or Taskmaster in a certain number of fights!

This event lasts for two weeks with different tags available each week. Claim rewards by selecting and sharing Black Widow’s special ability tags with your friends!