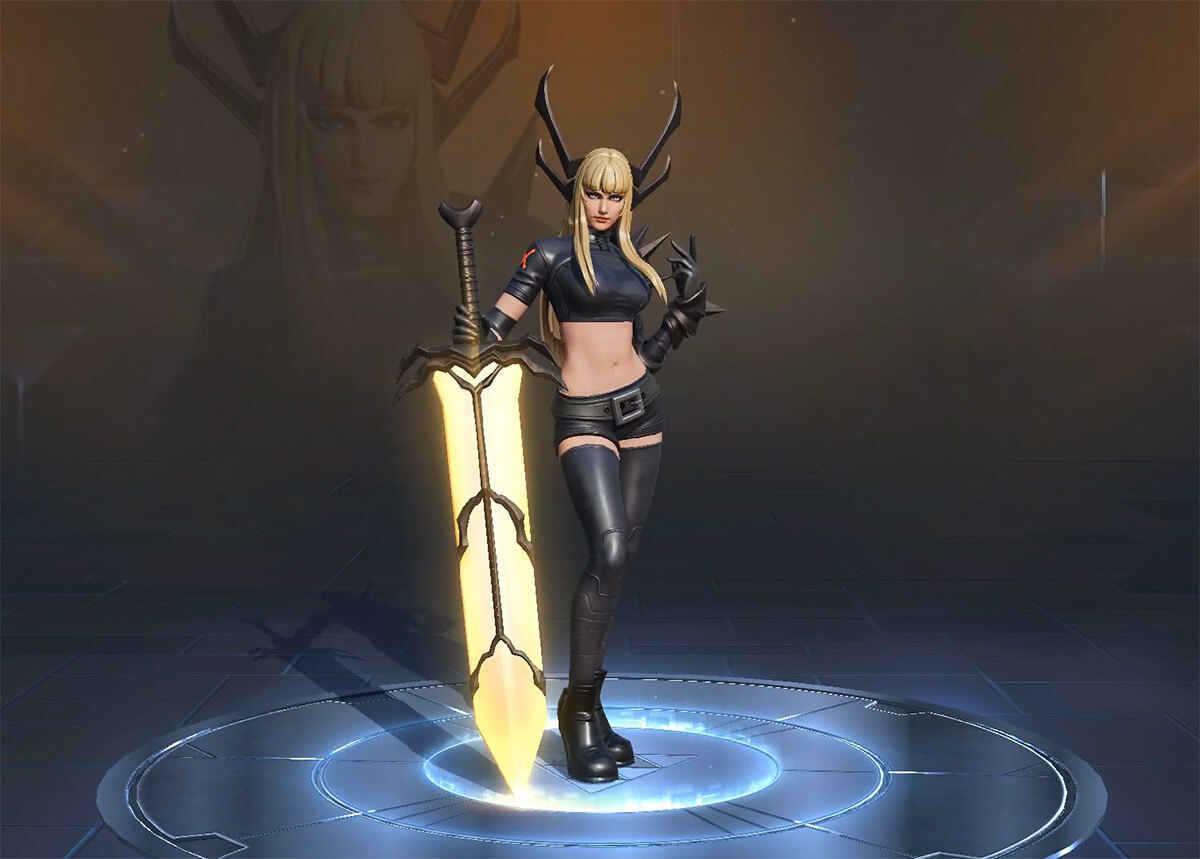 On October 8, 2020 (Thursday) at 5:00 AM (GMT+8), the new roster of heroes that are free to use in 5v5 battles will be: Black Knight, Ghost, Jubilee, Namor, Pixie, Quicksilver, Rocket Raccoon, Star-Lord, Storm, and Thor. Go forth into battle, Watcher!

Season 4 will begin after maintenance on October 10, 2020 (GMT+8). Please take note of the following:

At the start of Season 4, the starting tier for all Watchers will be based on their final tier at the end of Season 3 and will be inherited accordingly.

Match data for Season 4 will be added to Season Moments at the start of Season 4. 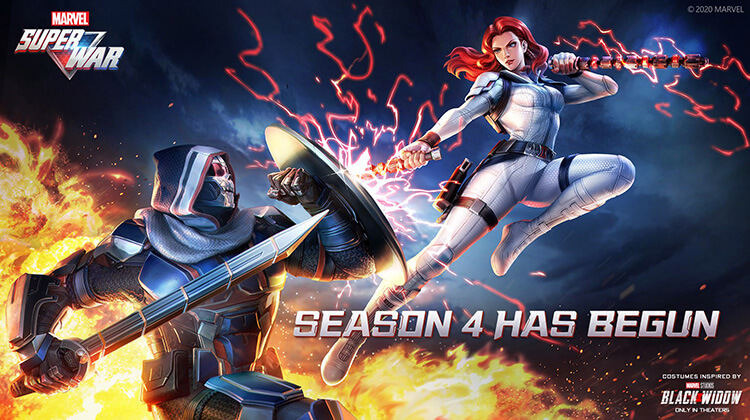 Magik is a melee DPS hero. Her sword can easily slice through armor, and she is capable of dragging enemy heroes into limbo. 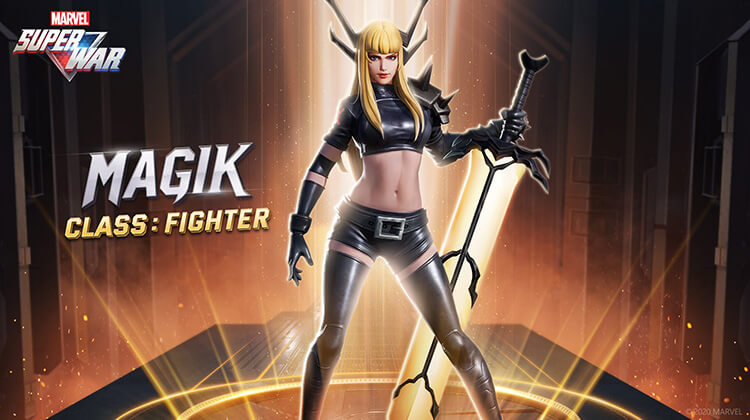 Passive: Magik gains dark energy when she deals damage to enemies. When she has dark energy, her basic attack deals extra damage.

Passive – Darkchylde: Magik transforms into Darkchylde when she has full dark energy, strengthening her basic attack and increasing her movement speed and attack speed.

Magik channels her power to spin and deal damage. Press and hold the ability to channel power. The longer the time, the higher the damage. While channeling, Magik receives reduced damage but is also immobilized.

This ability’s damage increases during her Darkchylde state.

Magik swings her sword in the specified direction twice, damaging and slowing enemies in her path while recovering HP.

Magik sends forth a wave of dark magic energy. Press and hold the ability to channel power. Magik’s movement speed increases while channeling. When she finishes channeling, she slashes in the direction of the joystick, dealing AoE damage.

Magik banishes the specified enemy hero to Limbo and engages them in single combat.

All Magik – Illyana Rasputin archive data has been collected. She will be joining you all in battle this week, and her Classic skin will be added to the Shop.

From today until 11:59:59 PM (GMT+8) on October 16, all Watchers can purchase the Magik Data Pack, as well as recruit this hero and unlock her skin! There’s even a 20% off discount on this pack in its first week!

War Machine’s new epic “Warbringer” skin is now available in store. Enjoy a 30% off discount from October 10, 2020 after maintenance to October 23 (GMT+8). Don’t miss out! 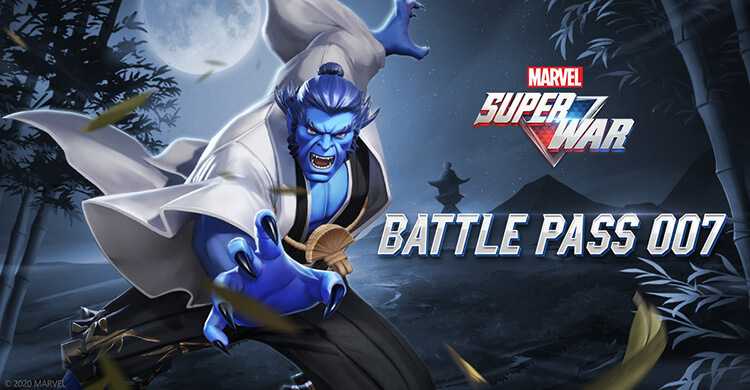 Watchers can use Assembly Vanguards and S.H.I.E.L.D. Tokens to redeem them in the Redemption Shop. The supplies include Magneto’s exclusive Battle Pass skin – Galactic Force, and the Battle Pass 001 exclusive Home Beacon, Broadcast Screen, and Avatar. This limited-time return ends when Battle Pass 011 is announced, so redeem them while they’re available!

Early trial: Even if you haven’t reached Lv. 60, you can still try out the skin reward! This privilege only applies for the duration of this Battle Pass. You can unlock the skin permanently once you reach Lv. 60.

Complete specific daily quests during the event to obtain Decoder Chips and use the chips to draw prizes. Reach a certain amount of drawing attempts to unlock the limited-edition “Exclusive Avatar – Agent Black Widow” and “Exclusive Avatar – Fated Rival!” 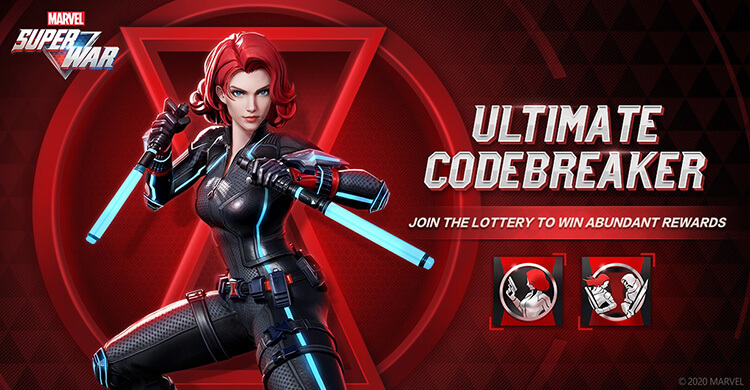 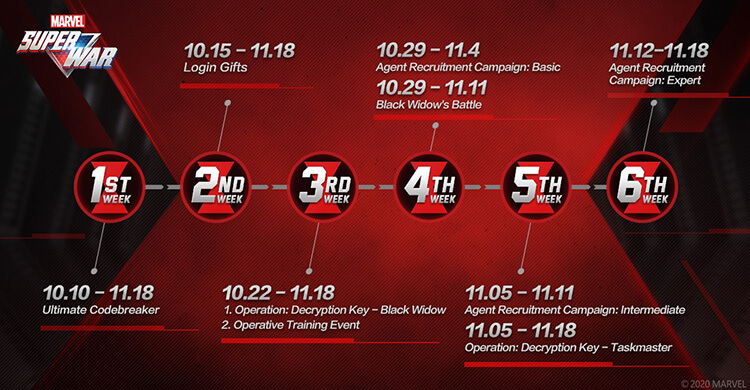 Complete the corresponding daily quests to obtain Decoder Chips. Use Decoder Chips to draw various prizes in the Ultimate Codebreaker event and receive a chance to win “Selection Pack – Skin!”

Experience the brand-new Battle for Vibranium and claim deluxe rewards!

We’ve made some adjustments to Battle for Vibranium to make the mode more fun. The new version will be updated at midnight on October 10, 2020 (GMT+8).

Only 1 Vibranium will be present on the field at all times.

Heroes who have Vibranium will gain an attack bonus and can deal fatal damage to enemy heroes with lower HP.

Earn points by submitting Vibranium within the designated time and by KO’ing enemy heroes. Teams who have Vibranium receive extra points when they K.O. an enemy hero.

Watchers can use support items contained within Vibranium Supply Boxes to temporarily enhance their capabilities and K.O. the enemy hero who has the Vibranium to take it from them.

The elemental projectiles fired from Star-Lord’s Let’s Rock are too efficient at triggering some of his gear’s special effects, allowing him to deal more damage than expected when equipped with low DPS gear. We hope to reduce Star-Lord’s use of attack effects by enhancing his buffs on attack-oriented gear.

The weakening coefficient for triggering the elemental projectile’s attack effect has been reduced from 30% to 24%.

HP growth coefficient has been increased from 210 to 220.

Psionic Shield’s effective radius has been increased from 150 yards to 200 yards.

We hope by reducing the cooldown for Deep Sea Vortex to increase Namor’s movement speed, thereby making him more of a threat in teamfights.

Base movement speed has been increased from 365 to 375.

We realized that trying to stack Stormbreaker’s passive ability to full is more difficult than expected, putting it at a disadvantage compared to other cooldown-reducing gear. We hope to fulfill its potential by making it easier to trigger the gear’s passive ability.

We realized that players who are able to buy Megingjord early had marked endurance advantage, allowing them to benefit in the early and mid-game. We hope to encourage players to consider buying this gear in the mid to late game for more economic growth by increasing the cost for combining this gear. We’ve also weakened the increased healing effect provided by this gear.

The “increased healing received” effect has been reduced from 30% to 25%.

The trigger interval for Cloak of Levitation’s passive has been reduced from 40 seconds to 30 seconds.

EP regen acceleration has been reduced from 50% to 25%.

EP regen acceleration has been reduced from 50% to 25%.

We hope to better differentiate the two pieces of defense-oriented support gear, Gemstone Prism and Enhancement Serum, to satisfy the attack needs of certain support players.

The models of minions in battle have been changed to Marvel’s “Black Widow” inspired theme.

The lobby has been changed to Marvel’s “Black Widow” inspired theme.

The background music has been changed to music exclusive to the Marvel’s “Black Widow” inspired event.

Adjustments and Optimizations to Surtur and His Summons

We wish to make it more worthwhile to take down Surtur, and add a certain level of risk when going after him.

We want to better clarify Surtur’s function by making it more enticing for the team with Surtur’s Crown to summon him and encouraging Watchers to plan their push around Surtur instead of relying on laning.

We hope to have Surtur’s presence speed up the battle in the late game and play a part in ending the battle.

Before adjustment: Eternal Flame triggers upon summoning Surtur with Surtur’s Crown, and continues to cast on all 3 lanes every 15 seconds for a total of 3 times.

After adjustment: Eternal Flame triggers when Surtur is KO’d, and continues to cast on all 3 lanes every 30 seconds for a total of 3 times.

Added a mechanic that grants heroes stronger turret destroying capabilities when they are near the summoned Surtur. When near Surtur, all basic attacks of friendly heroes will deal continuous true fire damage to turrets.

Increased Surtur’s strength in the late game when summoned using Surtur’s Crown. When summoning Surtur with Surtur’s Crown after KO’ing Surtur 20 minutes after the match begins, the mutual buff between Surtur and heroes grows stronger.

Added an HP regen mechanic to Surtur during battle.

Increased the dual-resistance reduction effect on heroes near Surtur.

Optimized the warning indicator display for some of Surtur’s abilities.

Optimized the Coin distribution logic after Surtur KOs minions with his Eternal Flame. If there are no heroes near the lanes, the Coins from the lanes will be distributed equally to all team members.

Fixed an issue where, in rare circumstances, Surtur would not leave battle to recover HP when there are no targets in his attacking range.

Adjustments and Optimizations to Avatar of Bast

We wish to make it more worthwhile to take down Avatar of Bast, and add a certain level of risk when going after him.

We hope to have Avatar of Bast’s presence speed up the battle in the late game and play a part in ending the battle.

Adjusted some of Avatar of Bast’s basic stats.

Avatar of Bast’s attack growth coefficient has been increased from 10 to 15.

Adjusted the initial and maximum Coin value from KO’ing Avatar of Bast.

After adjustment: Bonus is set at 150 Coins per person.

Revamped the team buffs gained from KO’ing Avatar of Bast.

Before revamp: Increases hero’s physical attack and energy attack by 15%/20%/25%.