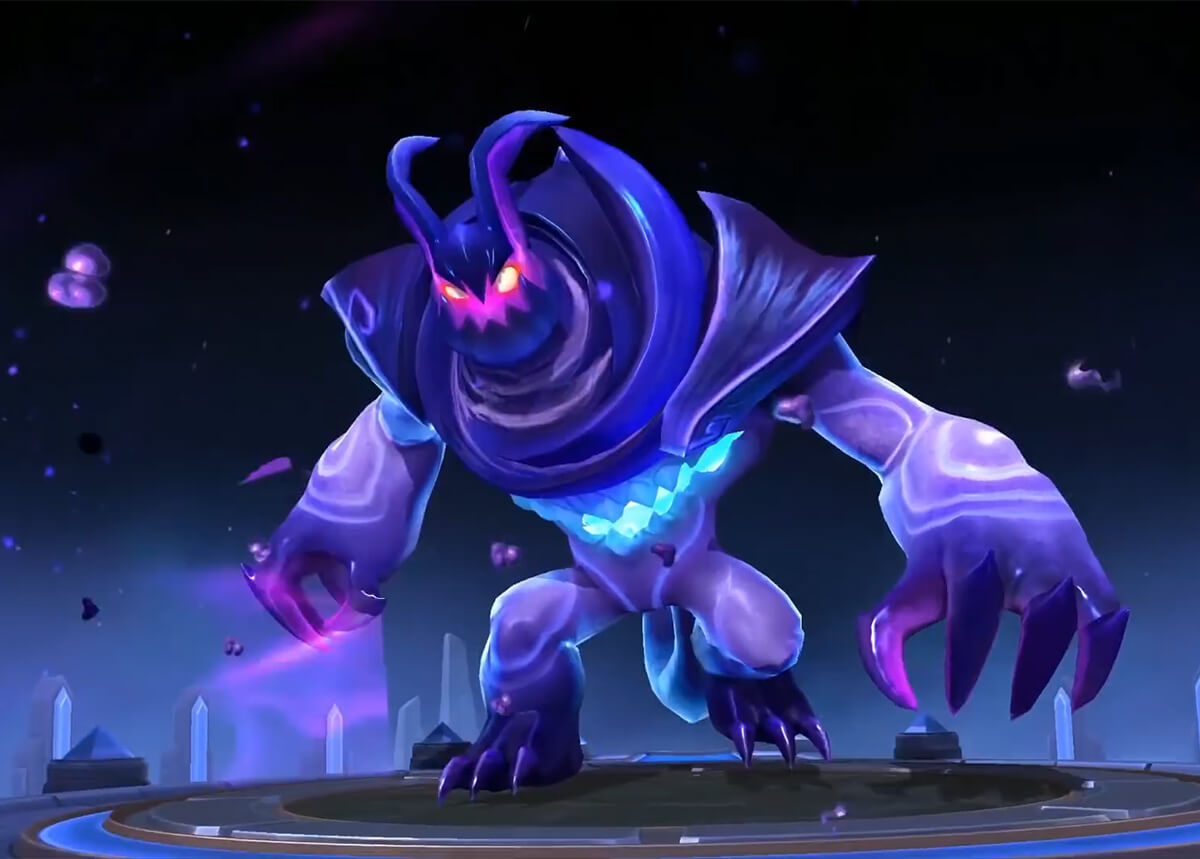 In the new season, “Magic Chess: The Rise of Nature Spirits”, the Synergies as seen in the previous anniversary season remain mostly unchanged, with only some being reworked and adjusted.

Hero Feature: Gloo, a mischievous troublemaker, is composed of mysterious creatures that merge together.

Enemies gain a stack of Sticky each time they’re hit by Gloo’s skills, decreasing their Movement Speed. Stacks up to 5. Each stack of Sticky on an enemy reduces their damage dealt to Gloo.

Gloo reaches out and slams the ground, damaging the enemy and leaving behind a “Goo”, and after 3s it explodes to damage and immobilize nearby enemies. Gloo can also make the Goo explode immediately by touching it.

Gloo splits apart, during which time all Goos may move together freely at an increased speed, recovering HP and damaging targets they impact.

Gloo attaches itself to a target enemy hero with full Sticky stacks and instantly regains a large amount of its own HP. During this time it can freely cast skills with cooldown times halved, and Basic Attack to cause an explosion at its current location. Each instance of damage it receives is transmitted onto its host and Gloo regains it as HP (excluding damage from Turrets).

Significant adjustments were made to the following heroes in this patch:

Having listened to your opinions, we’ve focused on improving the experience of using his enhanced Basic Attacks, optimizing how they feel to use and the damage they deal. In the interests of balance, we’ll be reducing his Physical Attack somewhat.

Slightly reduced the Energy gained per second. If an enhanced Basic Attack kills an enemy, the attack will no longer continue.

We realized that playing as Beatrix was a little extreme; in the early game she could exert a lot of pressure upon enemies, creating a snowball effect as she got stronger and stronger. And if this early-game opportunity was missed out on (as it was in most cases), it’d be difficult for her to be of use in teamfights. With this round of changes, we hope to nerf her early-game performance (readjusting some of the previous nerfs) and buff her in the late-game as appropriate.

As a core Mage, Yve excels in her damage output. Nonetheless, with no control effects or defensive measures, she appeared to be a little helpless when under threat from the enemy. To deal with this, we’ve improved her survivability when casting her Ultimate as well as her ability to shut the enemy down; and to keep things balanced, her damage has been nerfed accordingly.

The former slow effect inflicted when touching the edge of her starfield has been replaced with 0.5s immobilization instead.

New Effect: Yve now gains a large Shield upon casting her Ultimate (500-900 +150% Magic Power, an amount that scales with her Passive stacks to a maximum of 150%). This Shield lasts for 3 seconds after her Ultimate ends, then disappears.

We’ve greatly increased the response speed when attacking with her Ultimate.

Fixed an issue where the “Hero Lock Mode” could prevent you from sliding when using the Ultimate.

Improved the smoothness of movement following the Ultimate, so that you can now move as usual once it ends, no matter when you start moving the joystick.

Having taken everyone’s suggestions into consideration, we’ve decided to keep all of Natalia’s characteristics intact; however, we’ve changed how you silence enemies to delay silencing effects. We’ve also made her mid-to-late game damage dealing and survivability stronger. We hope this all serves to strengthen her overall performance a little, while still leaving room for enemies to deal with her.

Physical Attack bonus when linked with allied heroes increased by 20%.

Magic Power boost when linked with allied heroes increased by 10%.

The small can be mighty, too! Cyclops’ characteristic as a high-frequency magic caster in the late game is something we’ve emphasized in this update.

It’s been a while since we’ve heard from the Ashura King, but he’s been working on his moves. He’s now able to get close to and shut down the enemy much more frequently.

Fanny’s swordplay is sharper than ever. She’s now better at farming and combat in the early game.

Ling’s incredible lightness skill has reached new heights, too. Now, he can readjust himself even more quickly atop walls.

The master thief’s performance far exceeded that of other Marksmen in the previous version. As such, we’ve made some adjustments to him.

Gloo “Verdant Enchanter” will be available on April 16th (Server Time) for 269 Diamonds. Launch week 30% OFF.

Gloo and skin “Verdant Enchanter” will be in a bundle and available on April 16th (Server Time). Launch week 30% OFF.

Yi Sun-shin’s skin “Azure Sentry” will be available as the May Starlight Skin on May 1st (Server Time).

In this version we’ve made a considerable amount of adjustments to various battlefield values. We hope that those with the upper hand will still have the chance to keep pushing for the advantage, while retaining the possibility for their foes to turn the tables on them. In addition, we hope this version minimizes the appearance of matches that are too long/short in duration.

1. Adjusted heroes’ respawn time to be shorter in the first 20 minutes of a game, after which it grows in duration.

2. Adjusted the bonus rewards for ending an enemy’s streak.

3. Reduction in Gold granted to the enemy when killed by them each time: 30 → 40

6. Attributes of the Lord (which can aid pushes):

7. Reduced the damage minions deal to Bases by 50%.

8. To prevent abnormal Lithowanderer behavior in certain situations, you can no longer use control effects against them.

10. Optimized the color of the Mana values in Cecilion’s skill description, to make it easier to differentiate between Mana bonuses and Magic Power bonuses.

The 515 eParty is about to get started! Call on your friends and take a look at this preview, and see what kind of wonderful rewards will be up for grabs in the party!

1. Party Treasure will be available from May 1st!

2. The Carnival Party event will open for a limited time only!

3. 515 Sign-ins officially begin on May 8th. Log in each day to claim an all-new Sacred Statue and heroes, completely free.

4. The Party Star event officially begins on May 13th. There’re all-new and free skins and recall effects just waiting to be claimed!

5. Once enough people join in the 515 eParty, there’ll be an additional surprise when tapping the 515 logo! Come check it out!

6. For info on more awesome events, check in the game!

The Trial of Knowledge Phase 3 event is about to begin. You may claim the avatar borders of the previous phases.

1. Effects, Killing Notifications, Elimination Effects and Spawn Effect Trial Cards (as well as battle emotes) can now be used immediately by tapping them after purchase.

3. The time limit for final adjustments in Custom Mode and solo Classic Mode is now 20s.

6. Adjusted the frequency at which the Mentoring Relationship application tutorial is shown.

7. Optimized the notification dot function, reducing the frequency of the red dots that appear in battle/in the system.

9. With a 5-player party, you can take part in Ranked Mode with teammates of ranks that are 2 ranks higher or lower than yours.

10. In 5-player Ranked matches, parties with disparities of up to 2 ranks are now permitted. Matchmaking is conducted according to the highest-ranking party member.

11. Optimized the Hero List’s “sort by matches played” function, so that if multiple heroes have been played in the same number of matches, those owned are listed first.

12. The content shown in Magic Chess History data has been changed to Synergy and Combat Power.

13. BattlelDs shown in the Magic Chess results screen can now be copied to the clipboard.

16. If in a team of five friends, it’s now possible to use newly-obtained heroes in Ranked mode.

17. Optimized the lobby feature, which allows you to receive invites from friends when it’s just you in the lobby.

18. Adjusted the frequency of the pop-ups regarding Conquest of Dawn.

1. Fixed an issue where the same hero could trigger and stack Glowing Wand effects with their Summon.

2. Fixed display issues that could occur when multiple sight-revealing functions became active at once.

3. Fixed an issue where the pointer beneath the feet of heroes able to transform would disappear upon transforming.

4. Fixed an issue where Benedetta could block control effects from Jawhead’s throws, but would still take damage.

5. Fixed an issue where Diggie would sometimes be unable to move after transforming into an egg.

6. Fixed an issue where Lesley’s Passive would fail to take effect under certain circumstances.

7. Fixed an issue where Wanwan’s Ultimate would, on occasion, fail to deal any damage.

8. Fixed an issue where, if Faramis died and then revived with his Ultimate and killed the same target whom he had been assisted in killing, he would be credited with both a kill and an assist.

9. Fixed an issue where Beatrix’s Passive icon wouldn’t change to match her current weapon in the battlefield.

12. Fixed an issue that would result in guide effects not appearing when you set up your Favorite Heroes.

13. Fixed an issue that would sometimes prevent banning during Draft Pick.