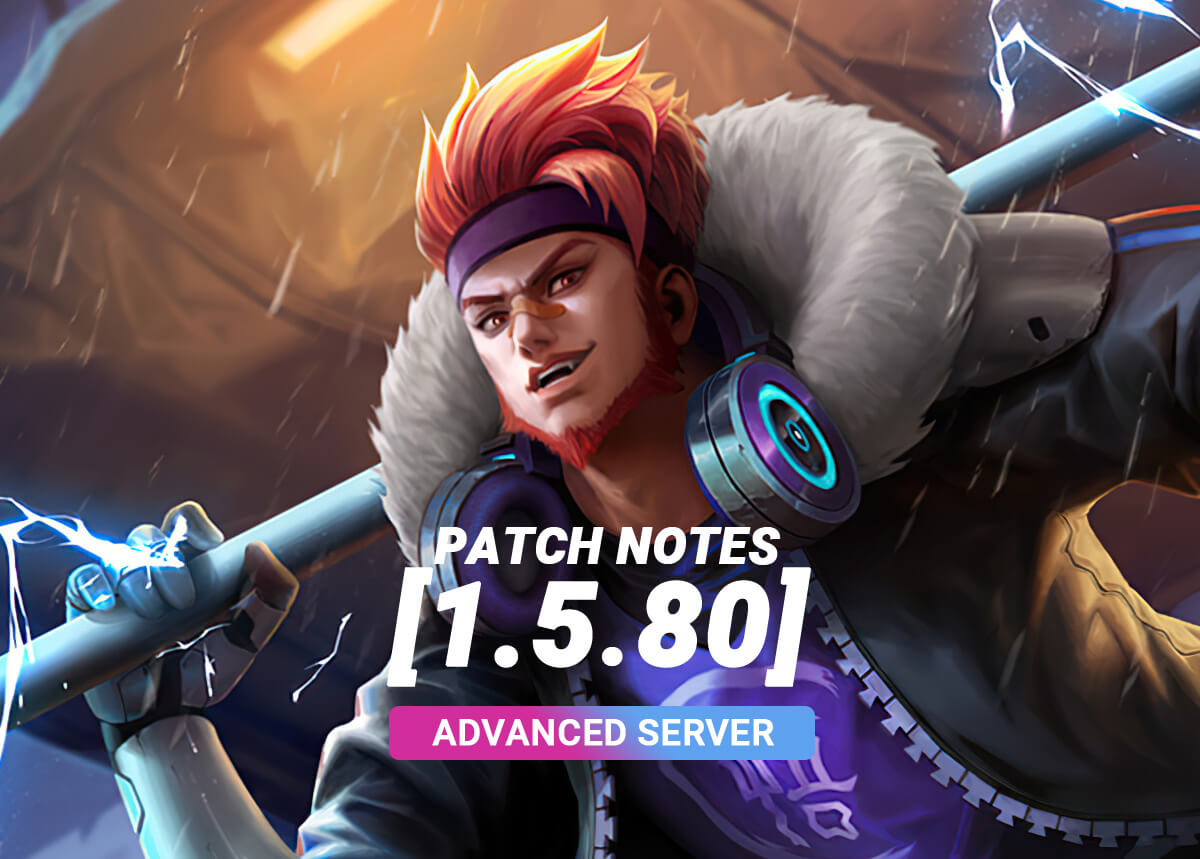 We believe that everyone has already seen the revamped Karina. And this time, we’ve revamped another popular hero from the “Reforge Your Legend” event: Sun.

We’ve also added a Blink skill that performs in essentially the same way as Endless Variety. This allows Sun to confuse the enemy and escape from battle. We’ve also improved Instantaneous Move’s damage, making it inflict AOE damage instead, to strengthen Sun’s Burst ability and ability to clear minion waves. We hope that these changes will make Sun “the Monkey King” of the Land of Dawn once more.

Sun hurls his Golden Staff toward a designated direction, dealing damage to enemies along its path and slowing them. Upon hitting heroes or creeps, it transforms into a Doppelganger that pursues the enemy.

The Golden Staff will transform into a Doppelganger at the end of its path if no heroes or creeps are hit.

Sun hurls his Golden Staff toward a designated direction, dealing damage to enemies along its path and slowing them. At that point, Sun will create a Doppelganger to confuse the enemies, while he enters stealth and sends himself and his Golden Staff flying. When it reaches the destination, he catches it and reappears. Hitting an enemy hero on its path will end its flight and make Sun appear.

This skill is learned along with his Skill 1, and shares its cooldown and skill level bonuses.

Sun and his Doppelgangers launch an instantaneous attack against a designated enemy, dealing damage to the target and enemies behind it.

Doppelgangers created with Skill 1 and 2 now deal this skill at the same time when Sun casts it.

Removed the Movement Speed boost applied to Sun and his Doppelgangers.

Sun’s skill values have also been adjusted accordingly in light of these changes.

Slightly reduced the width of the skill range.

In this update, we’re implementing a lot of changes to the majority of next season’s equipment-related content based on data from previous tests. We hope that the updated equipment will offer a better gaming experience for heroes of different roles, and bring new life to the battlefield. Some equipment is still in the testing phase, and will be introduced in coming versions.

We’ve separately outlined some of the main changes to equipment so that players used to previously-adjusted equipment can get to grips with the changes in this edition.

To ensure that testing for this round of equipment updates goes smoothly, we’ll again be resetting your customized builds to new default recommendations. You’re free to set your own build recommendations once you’ve got the hang of the updated equipment, too.

The following is an overview of the changes made.

The three former categories of equipment (Jungling, Roaming and Movement) have been combined together. We’ve made it so that junglers and roamers now have more slots to place equipment of their choosing. (We’ve also applied different selection methods to the circumstances in and outside of battle, as well as optimized the logic for relevant tips appearing in the matchmaking lobby).

Now they’re combined together, Jungling and Roaming equipment upgrades no longer cost Gold. Instead, you must meet certain requirements to upgrade them and attain all-new abilities.

We’ve adjusted the values and logic of the more than 10 pre-existing equipment items. In doing so, we hope that the functions and roles for each item are as clear as possible.

Enter a battle stance upon dealing damage to any enemy unit. This increases the hero’s Physical Attack by 8 and Physical Penetration by 4 each second for 3s, to a max of 8 stacks (and these effects are halved when it’s equipped by Marksmen, Mages or Supports); at full stacks also increasing Movement Speed by 20%.

Adjustment based on Patch 1.5.74: The effects are halved when it’s equipped by Marksmen, Mages or Supports

If no damage is taken or dealt within 5s, the next Basic Attack will deal extra Magic Damage equal to 200 plus 50% of the hero’s Magic Power, and inflict a 40% slow effect upon the target for 1.5s.

Increases Magic Damage Reduction by 3-10 upon taking Magic Damage (scales with level), lasting for 3s, to a maximum of 8 stacks.

After dealing damage to a creep, they take 3s of further sustained damage.

New Effect: If you’re not the one with the least Gold/EXP on your team, grant a lesser amount Gold or EXP to the ally who is instead (only one hero per team can enjoy Thriving’s effect at a time).

New Effect: Inflicts a 40% slow effect upon the target for 1.5s.

Gain a Shield equal to 200% Magic Power. Gain another one 30s after it breaks.

Physical Penetration increases by 0.05% for each point of the enemy’s Physical Defense when dealing damage to them, capped at 20%.

Physical Penetration increases by 0.1% for each point of the enemy’s Magic Defense when dealing damage to them, capped at 20%.

Respawn time is now capped at 90s, changing as time goes on.

There’s a significant disparity in abilities between players of different Ranks and their Emblem levels. As such, using the same set of values has become less suited for such a complex battlefield environment. In light of this, we’ve decided to consider the rules of traditional sports tournaments (where changes are made to the rules of different tournaments in the same sport), in order to provide a better experience for players of every Rank. The battlefield values will hence be individualized according to players’ different Ranks.

First, we’ll be setting the tournament mode and Mythic Ranked Mode apart from other 5v5 modes. When taking part in tournaments and Mythic Ranked matches, you’ll enter an all new Mythic Battlefield, in which Turrets, creeps and minions and other elements will be somewhat different from those of other modes.

We’ll continue to consider further individualized changes to even more Ranks in future. We hope that doing so will not affect the core gameplay, and that these changes will instead reach the target groups effectively without impacting other players. We’ll keep on adjusting and testing this on the Advanced Server before releasing the Mythic Battlefield onto the Official Server. All players are welcome to provide any opinions or suggestions you have in the process.

According to the Advanced Server’s testing requirements, we’ve set the Mythic Battlefield to be available to Elite Ranked matches or above ranks for the time being. The rank of a ranked match will be decided by the player with the highest rank in the lobby.

The following content is only applicable to Mythic Battlefield:

If Gold Lane Outer Turrets have the Energy Shield on, nearby allied heroes gain a damage reduction: 15% → 25%

When both percentage and fixed-value Penetration are in effect, the algorithm will now prioritize the percentage before the fixed value.

Added a new restriction that limits players to buying only one set of Footwear (if you’ve equipped with Retribution, you’re limited to buying Jungling Footwear; otherwise you can buy one set of common or Roaming Footwear).

New rule: The price of all Footwear is 0.

New Effect: If you have Retribution equipped, you receive a creep reward bonus while rewards from minions are reduced. Reaching a certain number of creep kills or hero kills/assists unlocks advanced skills (based on the Jungling Footwear purchased), and stops the minion reward reduction.

Can be used against heroes, dealing a small amount of True Damage and absorbing Movement Speed from the enemy over 3s.

Can be used against heroes, dealing a small amount of True Damage and absorbing Physical Attack and Magic Power from the enemy over 3s.

Can be used against heroes, dealing a small amount of True Damage and absorbing HP from the enemy for self-healing over 3s.

Movement Speed boost reduced. The number of increased attributes has been raised, and they are also enhanced.

New skill. At set intervals, the next time the hero casts a healing or shield skill, it also restores some HP for a nearby ally with the lowest HP. (Regen skills do not trigger this effect.)

New skill. At set intervals, the next time the hero damages a target and leaves it below 30% HP, they’ll deal extra Magic Damage equal to a proportion of the enemy’s Max HP.

Damage ratio remains the same, while the type changed to half Physical Damage half Magic Damage.

Improved the speed at which various system interfaces from the main screen can be opened, and added opening animations to some.

To minimize view obstructions, the settings interface has now been changed to a popup screen when you’re in battle. You can now also adjust this screen’s opacity.

Practice Mode and Tutorial stages have been integrated into a new interface in the mode selection screen.

Fixed an issue where Angela’s view wouldn’t stay locked on to the target when casting her Ultimate.

Fixed an issue where, in certain situations, Gloo’s vision would be hindered while casting its Ultimate.

Fixed an issue where advanced Retribution could grant you buffs when used against minions or creeps.

Fixed an issue where the jungling equipment skill “Hunter” could cause extra damage to minions.

Fixed an issue where damage from the Cursed Helmet’s skill “Sacrifice” could receive Spell Vamp buffs.

Fixed an issue where, after Basic Attacking a creep, heroes wouldn’t automatically attack the next creep without manual operations.