The Desert King who can absorb energy and become bigger! 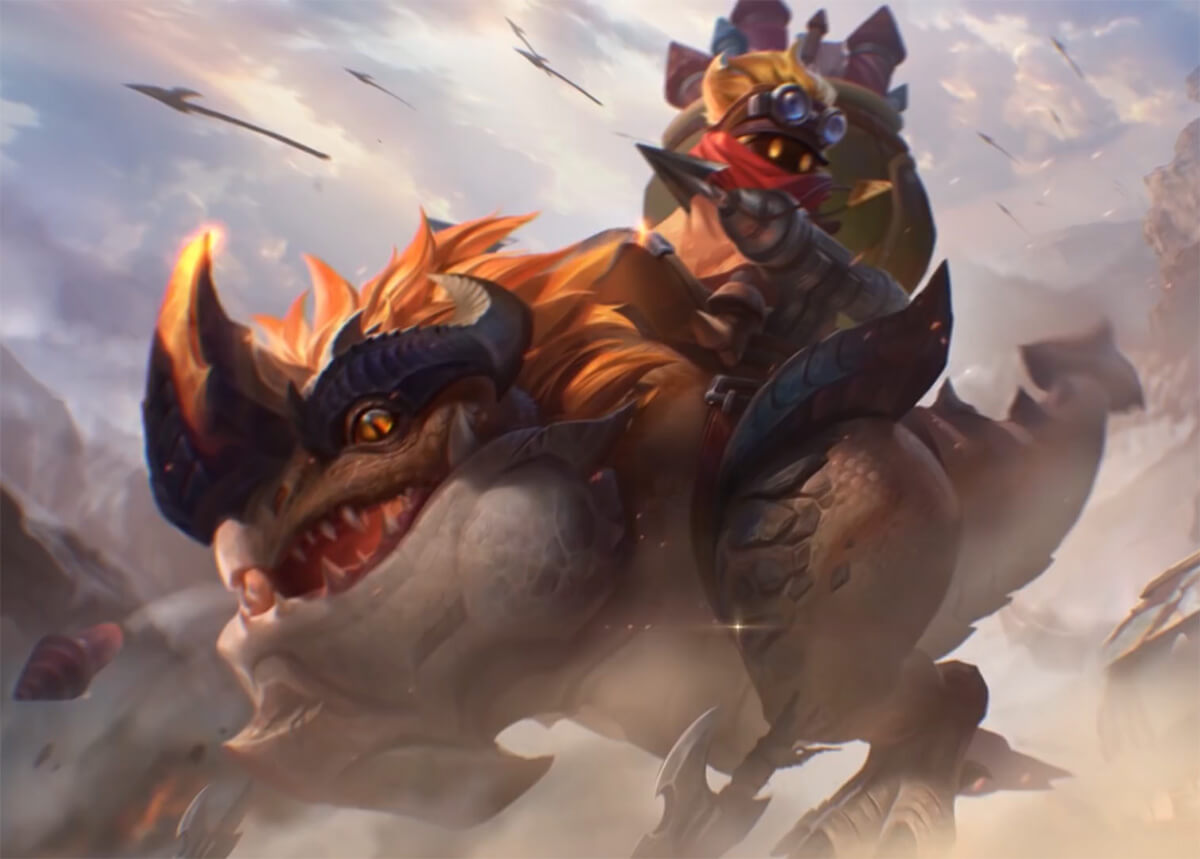 Barats, the Dino Rider, is a Tank/Fighter hero in Mobile Legends: Bang Bang, the mobile MOBA game developed and published by Moonton.

Passive: I Am Big!

Each time Barats and Detona deal damage to a target, Detona gains 1 stack of Big Guy for a period of time, capped at 25 stacks. For each stack of Big Guy. Detona gains increased body size, Physical & Magic Defense, and Resilience. When Big Guy reaches 16 stacks, Detona will [trample] the target with his Basic Attack, dealing extra damage to enemies within a round area and slow them.

Barats launches a missile to the designated area. Upon landing, a blast of flame spouts out from the rear of the missile, dealing damage to the enemies in a straight line and pushing them toward Barats a certain distance.

Detona locks onto an enemy hero. If the target doesn’t leave Detona’s hunting range within a period of time, Detona will devour the target, suppressing the target for a period of time. During this period, Barats is immune to control effects and unable to move while still being able to turn direction. Then Detona spits the target out a certain distance, dealing damage to the target. If the target is knocked into other enemy heroes or walls, the target and the enemy heroes that it was knocked into will take extra damage and be stunned. The damage of this skill scales with the stack number of Big Guy. By learning this skill, Detona gains some stacks of Big Guy immediately after each respawn.

The Politans who live between Albata and the Moniyan Empire are very similar to mankind. They are small creatures, yet extraordinarily smart. These dwarfs built their homeland within a low mountain basin and are constantly obsessed with money and riches.

Barats was born in such a Politan village, and he was born a naughty boy. Everyone in the village was annoyed by his trouble making nature. And such a childish personality didn’t change even after Barats grew up. He had the same lust for money as his kind, but Barats hated learning and working. He would spend his entire day and free time, dreaming that he could miraculously get rich overnight.

The villagers disliked Barats for his laziness, and they were subsequently thinking about chasing him out. This greatly angered Barats, who as a result sneaked into the village’s sacred place, stole a precious item which was believed to be holy by everyone, and fled the place. The thing he stole was a treasure map. With the guidance of that treasure map, Barats arrived at the distant Albata. However, upon his arrival, he was disappointed by the what he saw.

There was nothing in view but desert sands and desolate ruins. All the marked locations on the treasure map were now covered in sand dunes and where nowhere to be found. Barats didn’t want to give up like this. He kept going forward in his search for the legendary Los Pecados. He wanted to try his luck there. But Barats lost his way along the journey. He hadn’t eaten on drunk anything for days, and now he just lied on the ground, tired and waiting for death.

But it was at this moment that a small dragon lizard appeared in front of him and guided Barats to a water body. Maybe it was the gratitude he felt for it’s help, maybe it was the same loneliness they shared together, or maybe it was just the fact that he needed a companion on his boring journey. Barats took this dragon lizard with him and agreed to put it on his backpack . Barats even named it Detona.

With Detona’s company, Barats’ adventure hunt was no longer lonely or dull. He would often share his ambition with this little guy, promising that he would impress everyone from his villager and do something truly amazing. As time went by, however, Barats was shocked by how fast and enormous this small lizard could grow into. It grew bigger and heavier every day and the pace of it’s growth was unusually fast.

Only a few months had passed, but Detona had already grown much bigger than Barats. Barats was ecstatic and he would often ride on Detona’s back and explore the desert. Together, they encountered and conquered many difficulties but unfortunately, the good times never last long. A sandstorm came out of nowhere, and Barats and Detona were separated by the gusting wind and the raging desert sands. They couldn’t find each other.

After the sandstorm died, Barats searched and searched in the desert. But he never found any trace of Detona, and his supplies of water and food were about to run out. They had built a strong bond and relationship with each other in these days of hardships. Yet when faced with a dire situation, Barats had to make the hard decision. He half-heartedly stopped looking for Detona and went on his way to the Los Pecados.

Years later, Barats had learned a few tricks in the Los Pecados. He used his skills to gather information for a local gang and made a living out of it. He muddled through the days and gradually forgot past his friend Detona. There was this one time when Barats found his chance to become successful. He sneaked his way into the renowned “Steel Hands” hunter group and went out into the desert with them, hunting for giant monsters and beasts. Their target was apparently a rare dinosaur. That lizard was strangely large and had the ability to breathe and absorb energy.

The “Steel Hands” hunter group had been tracking this enormous lizard for about twenty days. They used all the weapons packed in their armory and, after suffering great loss in both man power and weaponry, they finally managed capture the weary dragon lizard. Everyone rejoiced, including Barats, for that person who hired them had put a big bounty on this dragon lizard’s head. His share of that bounty would be very handsome, and everyone would respect his achievement.

As the group reveled in joy, Barats approached the giant beast and took a closer look at it. When their eyes met, Barats recognized that it was actually his long lost friend, Detona! Barats didn’t know what to do. Detona was his friend, who had saved his life on multiple occasions, but that bounty would give him enough riches to live the carefree life he longed for. He hesitated for a long while, and then he did something that a Politan would never do. Friendship triumphed over his desire for wealth, and Barats started to release Detona from the shackles by breaking open the chains. Having now broken free, Detona roared ferociously, and Barats leaped onto it’s back. It was like the good old days, except that Detona had grown even bigger.

The dinosaur strode forward and knocked down the surprised hunters off guard. And just like that, Detona and Barats disappeared into the distance. A few months later, Barats showed up at the gates of his dreams, Los Pecados, riding the intimidating giant lizard. He brought some hidden desert treasures which he had found with the help of Detona. Marveled by such riches, the Los Pecados’s hunters and gangsters grew to respect Barats and started calling him the Dino Rider.

In the next couple of years, Barats and Detona traveled between Los Pecados and the desert lands. They had become the most famous black market traders in the entire region. There is a saying spread across the desert: If you have some good stuff to sell, or if you want to find a way to join the Los Pecados Gang, then you should seek Barats the Dino Rider. But beware, you will have to offer a good price.