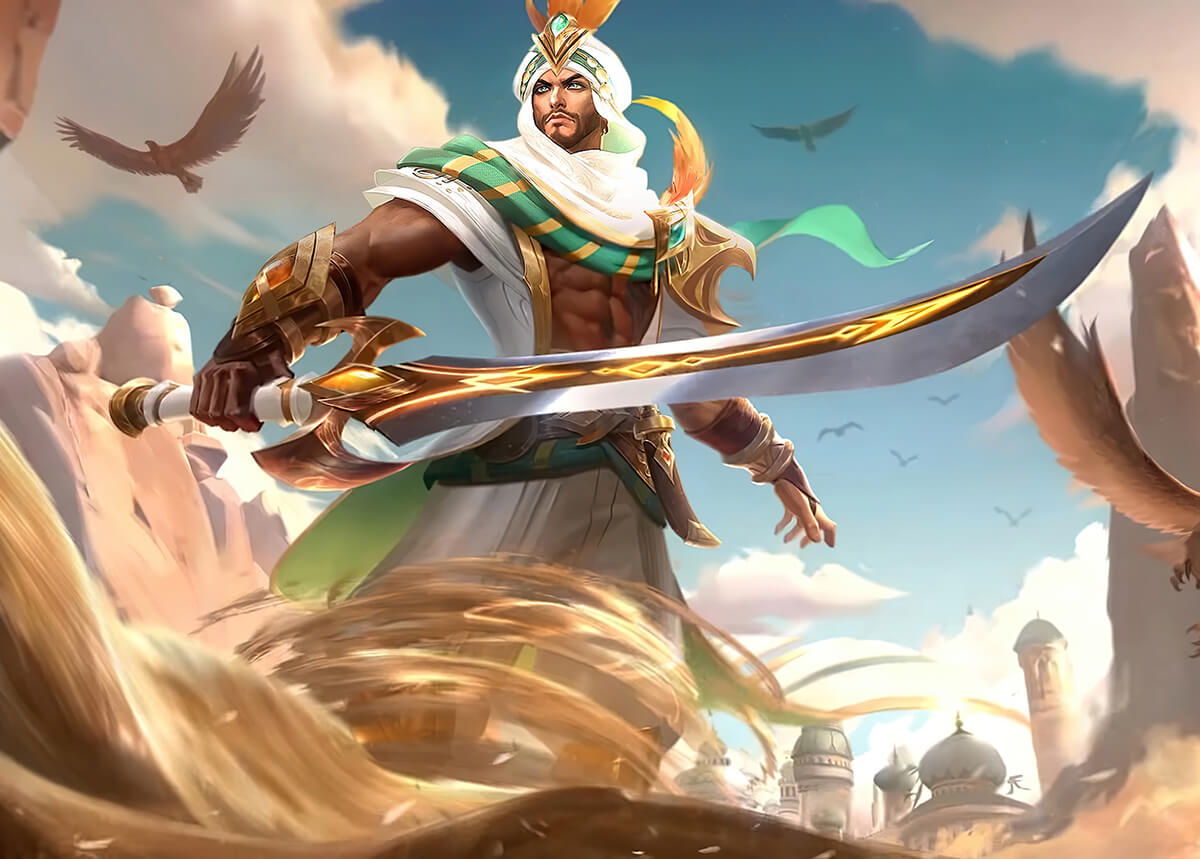 Khaleed accumulates Desert Power while moving and after Desert Power is fully charged, Khaleed will slide on sand, increasing his Movement Speed by 25% and enhancing his next Basic Attack Basic Attack.

Khaleed whirls his scimitar, dealing damage to nearby enemies. Upon hitting the enemy, Khaleed can leap one time in the movement direction and automatically cast this skill again. He can cast this skill a maximum of 3 times.

Khaleed protects himself with the power of quicksand, restoring HP, and reduceing damage taken for 4s. Meanwhile, nearby enemies are slowed.

There was an ancient tribe that lived in the endless deserts of Agelta Drylands. They built villages along the Emerald Road and were able able to pass down their civilization and legacy, through countless generations.

As the prince of the Artha Clan, Khaleed loved adventures. He longed to experience the once-glorious culture of the Emerald Road, dreaming that he could one day visit the vast Ageltas Drylands and witness it’s prosperity. Ever since he was young, Khaleed would often take his squires with him, on an adventure along the Emerald Road.

During their adventure, Khaleed met prince Moskov of the Wildsand Clan. The two equally brave young men shared the same passion for adventures, and quickly bonded with each other and developed a strong friendship. Together, they explored the entire Agetla Drylands.

However, the adventure of Khaleed and Moskov was a short one. It was not before long that disaster befell their Clans. The savage leader of the Thornwolf Clan declared a war and planned to conquer all of Agelta Drylands, just like the Tyrant Khufra once did. Faced with merciless enemies, Khaleed and Moskov bravely decided to lead their people and fight against the invaders, till the end.

During the war, Khaleed showed strong leadership and great charisma. Every Clan recognized his capability and followed his lead. As time went by, the ambitious Moskov lost his spotlight and slowly became resentful. However, Khaleed did not notice his friend’s feelings.

Khaleed and Moskov led the alliance of Clans and drove back their enemies. But it was during the exact moment of when they were about to take control of this war, that an accident occurred. To turn the tide against their foe, the retreating Thornwolf Clan decided they would go to Tihuacan, the Ancient City, and break the seal, that was binding Khufra. Sunbsequently, they succeeded and awakened the dormant Tyrant.

When Khufra came back to life, sandstorms raged across all Agelta. And then, the abhorrent sand monsters followed, rising from the depths of the desert.

Faced with Khufra and the the sand monsters, Khaleed was decisive. He ordered his allies to pull back and prepare for future conflicts. But the resentful Moskov took Khaleed’s decision as an act that lacked courage and responsibility. He challenged Khaleed in front of the crowd and blamed him for his cowardice. He asked the Clans to follow him and put an end to Khufra’s terror.

However, the leader of each Clan decided listen to Khaleed and were not supportive of his strategy. No one answered Moskov’s call. The humiliated Moskov grew even more resentful. Khaleed tried to stop him, but Moskov didn’t listen. He led his people into the desert, eager to prove his capability on the battlefield.

However, Moskov and his people were quickly surrounded and cornered by the formidable Khufra and the sand monsters. It was a massacre, Khaleed was faced with a dilemma. He had to choose between the safety of the friend who he had fought with for many years, or the life and future of all Clans.

But he couldn’t have it both ways. Khaleed was left with no choice. After careful consideration, he decided to retreat with the alliance of Clans. After they reached a safe place, Khaleed took up his scimitar and went back to rescue Moskov, all alone.

But he was too late. The Wildsand Clan was annihilated. Bodies scattered on the ground and Moskov was missing. Khaleed only managed to find his spear, which lay shattered, among the bloodbath.

Followed by the Khufra’s resurrection, the Land of Dawn’s western part fell into chaos, once again. Most lands were devoured by raging sandstorms, and the evil sand monsters plagued this once peaceful ancient place. Now, carrying the guilt of leaving Moskov behind, the determination of vengeance, and the expectation of his people,. Khaleed led his warriors into numerous battles in the next few years. They struggled against Khufra and the army of Thornwolf Clan, turning the tide to their favour, step by step.

In the final battle, Khaleed charged into a sandstorm, wielding Moskovs spear, and pierced through the artifact the Khufra’ held in his hand: the Orb of Sand. The orb started to leak quicksands, most of which entered Khaleed’s body and gave him the ability to command sands.

The Orb of Sand was shattered, and the sandstorms that once darkened the blue sky were no more. The sand monsters dissolved into oblivion, and the wounded Khufra retreated back to Tihuacan, the Ancient City. But so long as the Tyrant and his minions still lived, Khaleed would always have to carry the heavy responsibility of protecting the Western region’s. He prepared himself and his warriors for future battle against the malicious Khufra. He took a solemn vow that he would eventually restore peace, back to the ancient Agelta.

However, deep in the shadow, a familiar figure lurked behind and spied on Khaleed’s every move. His old friend, Moskov, had returned.