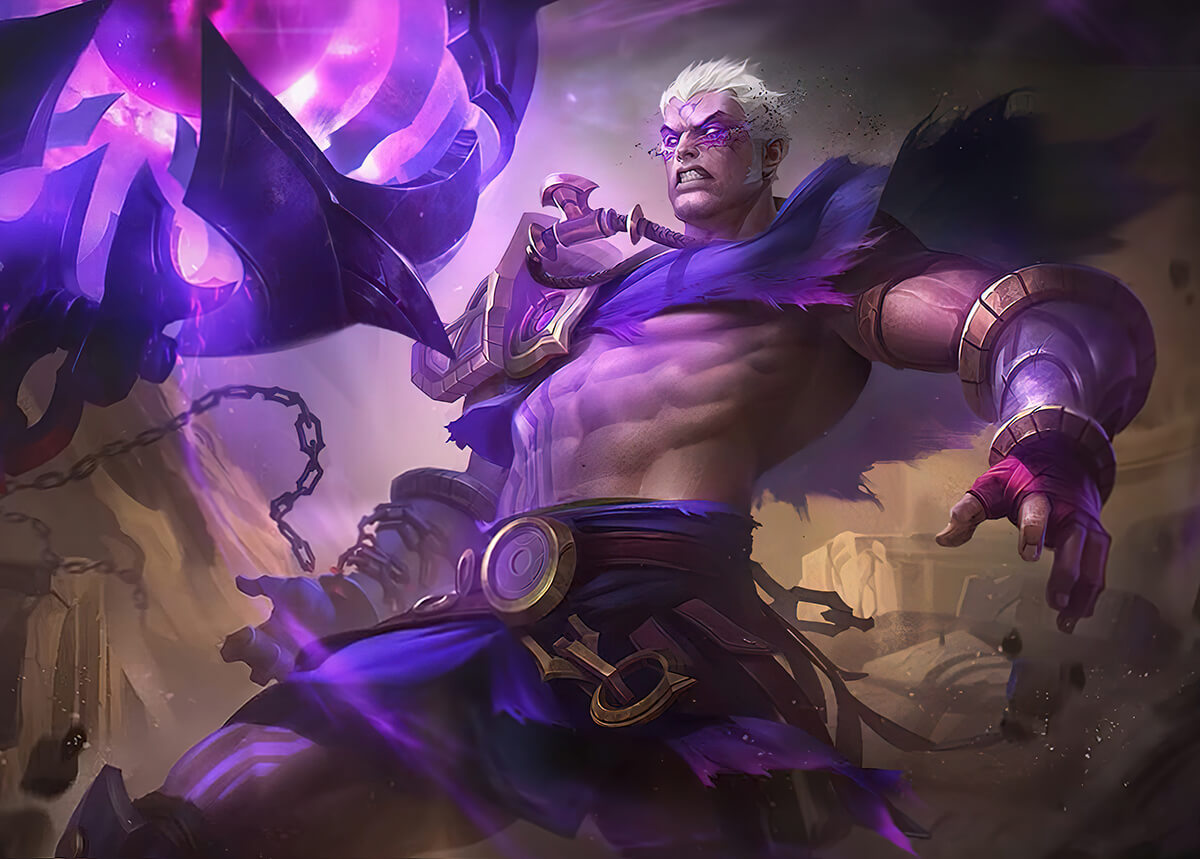 The yearly “515 eParty” event is underway! We’ve prepared loads of great rewards for you all: including 515 Exclusive Achievements, 515 Lucky Star Prize Draws, 515 unique skins, limited-time free heroes and many others.

Together with this, the Ravage mode is being revamped! Players now all become Beatrix, equipped with different weapons. Strive to get all the Aquamarines that appear upon the map to achieve victory! Forget about slaying minions, jungling and destroying turrets: in Ravage, you’ll want to grab all the Aquamarines you can to win!

Let’s enter this crazy month together as we usher in a celebration made for every player!

Hero Feature: He punishes anyone who frequently uses Blink.

Phoveus’ weapon, “Astaros”, holds mysterious powers and is exceptionally sensitive to fast-moving prey. When an enemy hero uses Blink or Charge skills near Astaros, it reduces all of Phoveus’ skill cooldowns or charge time.

Phoveus smashes the ground and unleashes “Astaros Dread” that deals damage. Upon hitting an enemy hero, Phoveus receives a Shield as well as a Movement Speed boost. If an enemy hero, creep or Phoveus himself touches (Astaros Dread. it will spread again. This skill gains charges at set intervals.

Phoveus summons forth the “Astaros Eye” that deals damage. After a short delay, it starts shrinking and pulling all enemies on it into its center, dealing damage to them again.

“Astaros” keeps a watchful gaze over the area around Phoveus. If it sees an enemy hero using Blink or Charge skills, it activates to cast a Mark upon them. During this time, Phoveus can rapidly Blink to their location to deliver an AOE blow as well as gain a Shield. Once Phoveus activates this effect, this skill can be cast, repeatedly before entering cooldown, as long as the required conditions are met.

We’ve given Bane new battle and display effects, and also revamped his Passive to make it stack up to 2, while shrinking its area of effect to make him more balanced as a Fighter.

Whenever he casts the skill, Bane infuses his weapon with Tidal Energy, up to 2 stacks. His next Basic Attack will consume 1 stack to deal damage to nearby enemies

We’ve also made other adjustments to this hero:

Significant adjustments were made to the following heroes in this version: Argus, Ruby, Nana, Gloo, Ling, X.Borg, Rafaela and Paquito.

Argus’ 3-strike combo from his Passive has been reduced to 2 strikes, the first carried out by Argus and the second by his shadow image. Besides, now he does not charge forth with the final strike. With these changes, it should feel even better to play as Argus when he’s got a high Attack Speed.

Greatly increased the width of the skill range.

Roger’s passed on his recent burning fighting spirit to Ruby, and she’s got even more capable with her scythe. Now she’s nimbler than before and unleashes her moves with ease. Her obsession with offensive tactics means her jumping abilities have regressed somewhat, however,

Nana’s growing ever more adept at controlling the magic power within her, and so is making great strides in her mana efficiency.

As Gloo’s Ultimate has more of a gradual effect on battle, we’ve decided to give it more opportunities to use it, drawing it closer to other Tanks.

New Effect: When the target Gloo is attached to dies, enter straight into a 6s cooldown.

Slightly reduced the skill range when X.Borg is in the Armorless State.

This archangel’s win ratio has been increasing steadily recently, and her high usage rate has pushed her into the top 3 most popular heroes in top-level matches. We’ve also noticed that it’s very difficult to deal with the new tricks she’s got up her sleeve. As such we’ve decided to retain the mobility she grants to her whole team, but reduce her healing capability. In the early game, it’s now inferior to that of Estes.

Optimized skill to make the description match its actual effects,

The Champ’s been pulling no punches and performing well with his combo Ultimates, a lot for enemies to handle. We hope that limiting his Ultimate’s offensive capacities and control effects, while slightly strengthening other skills, will give this legend more options on the battlefield.

We’ve been holding her back for too long-but now it’s time for Beatrix to take back her rightful place.

Diggie’s alarm has been in disrepair for years, and it’s now even more prone to stop working.

Reduced the chase duration of Diggie’s alarm, but slightly increased its chase speed.

Kaboom “Off-road Kaboom” will be available on May 21st (Server Time) for 269 Diamonds. Launch week 30% OFF.

Little Commander Kaboom and skin “Off-road Kaboom” will be in a bundle and available on May 21st (Server Time). Launch week 30% OFF.

Will be unavailable: Bruno “Vanguard Elite”

Toppling Turrets not only grants team rewards, but also gives you the advantage as it improves your sight range and ability to invade the enemy. This advantage is a little too strong, making it difficult for the team at a disadvantage to resist. In light of this we’ve adjusted the team rewards and offered more chances for the team under attack in such situations. Also, we’ve increased the amount of Gold you gain gradually, in order to help balance the influence of these changes on the flow of combat.

Reduced the respawn time after a battle lasts 25 minutes, to improve player experience in lengthy matches.

Increased the HP Growth of melee and ranged minions.

Fixed an issue where players that caused invalid matches would not be penalized.

It is now possible to report players for misbehavior once a match ends, via Profile – Match History,

Fixed an issue where players that had found a match yet didn’t prepare in time would not be penalized.

Fixed an issue where you couldn’t open YouTube streams.

Fixed an issue where Starlight Members would gain 10 Protection Points abnormally upon winning a match.

Fixed an issue where those who lost in an invalid match would receive a Protection Points mail by mistake.

Fixed the descriptions of certain equipment.

Slightly raised the perspective of Yve’s Ultimate and adjusted the position of the cancel button, so as to avoid making it difficult to use the skill.

Fixed an issue with the location of Atlas’ Passive, the “Frigid Breath” effect, after he entered the Ejected State and returned to his mecha.

Fixed an issue where Rafaela, Argus, Kaja, and Gusion would be exposed to enemies when they hit creeps with skills.

Fixed an issue with the damage type of Silvanna’s Basic Attacks on Turrets.