Battlefield of Valor is PvP content takes place every Sunday in the Moonlight Sculptor game.

Your Duel Arena Rank must be within the TOP 100 to participate, and Finals are held after concluding with the Preliminaries. Take over the top ranking spot in the Finals to reign supreme as Duel Incarnate!

Only adventurers within rank 100 in the Duel Arena can participate in the Battlefield of Valor.

This can be viewed in Menu -> Battlefield of Valor upon reaching character Lv. 25. 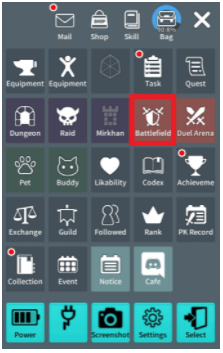 After an entry window of 5 minutes on every Sunday at 6:30 PM, Preliminaries will begin at 6:35 PM (your server’s local time).

Your Duel Arena Rank must be within the top 100 to participate.

Combatants are divided into 4 groups of 25 people each according to the Duel Arena Rank.

When the games begin, 1 match takes place for 5 minutes.

Rewards are given according to the Preliminaries rank.

The top 1 – 5 ranking adventurers of each preliminary group will advance to the finals.

Only the top 1 – 5 ranking adventurers of each preliminary group can participate.

When the games begin, 1 match takes place for 5 minutes.

Rewards are given according to the Finals rank.

Winning the Finals will make you the reigning Duel Incarnate of the season.

You will be bequeathed with Honorable equipment upon becoming Duel Incarnate. 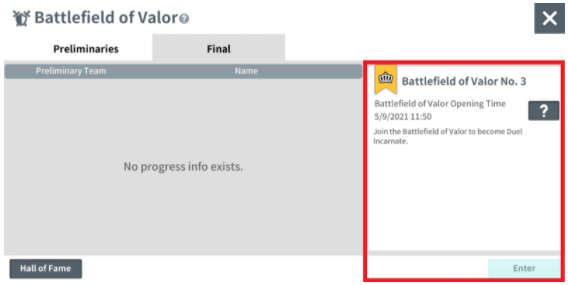 Rank 1 – 3 of the Finals are given Twilight Magic Quartz, Battlefield Fragments, Legendary Option Stone Chest, Dignified Sculpture Pot, and Orange Lunarium Rewards in the form of a Battlefield of Valor Reward Package (Chest).

Capes and Server Buff Scrolls given as rewards for Rank 1 – 3 of the Finals are durational items.

Battlefield Fragments can be used as crafting material for decorative Duel Incarnate clothes.

Preliminaries/Finals are held according to the following rules and restrictions.

You must defeat as many users as possible within the time limit.

You will be revived 10 secs later upon death, and you can spectate other characters during those 10 secs.

You get +2 points for killing other users, and -1 points upon the death of your own character.

If the final score is a tie, ranking is determined in the order of Lower Death Count > Lower Level > Greater Remaining HP Ratio.

Character names, titles, and guild names are hidden and only common job-specific appearances are shown.

Forming a party with other adventurers is prohibited.

Summoning and using mercenaries is prohibited. (Pets are allowed).

Use of HP/MP Recovery Potions is not allowed. 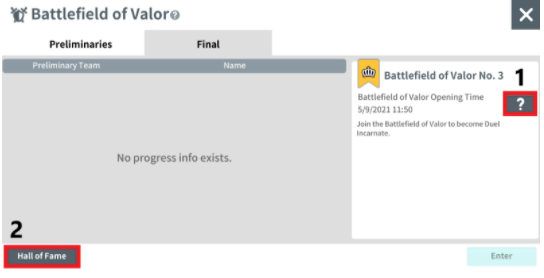 Click on ? button to examine the Battlefield of Valor Match Rules and Preliminaries/Finals Rewards.