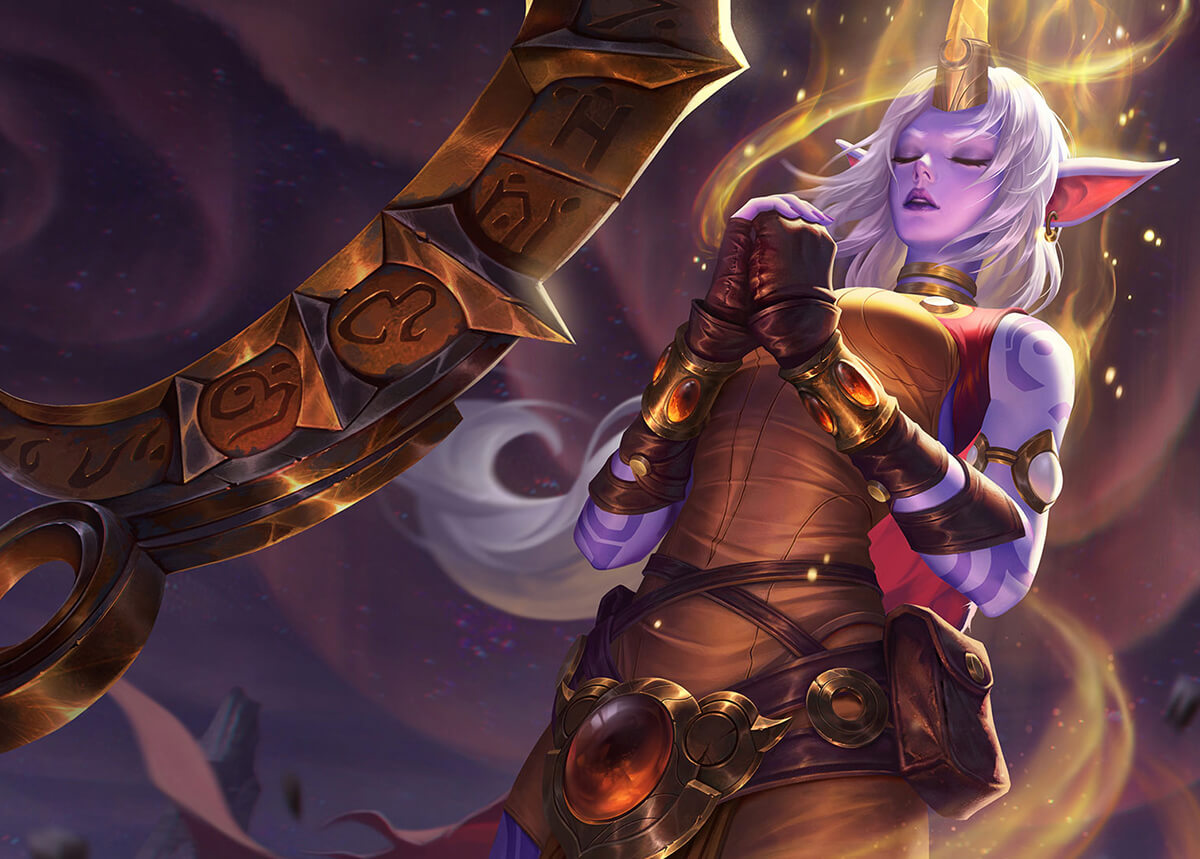 As we approach the end of the year, we’re squeezing in a few new champions, balance changes and even players into Wild Rift! A huge welcome from the team to new players joining the Open Beta.

This patch, we’re replacing Cooldown Reduction with a new stat called Ability Haste, in line with our friends on League of Legends PC. We’re also officially welcoming Darius and Draven onto the Rift with our first canon lore event, Noxian Brotherhood. Joining them later this month will be Wukong, the Monkey King.

Check out the latest /dev diary for more. Welcome to Patch 1.1!

Darius, The Hand of Noxus

There is no greater symbol of Noxian might than Darius, the nation’s most feared and battle-hardened commander. Rising from humble origins to become the Hand of Noxus, he cleaves through the empire’s enemies many of them Noxians themselves. Knowing that he never doubts his cause is just, and never hesitates once his axe is raised, those who stand against the leader of the Trifarian Legion can expect no mercy.

In Noxus, warriors known as Reckoners face one another in arenas where blood is spilled and strength tested but none has ever been as celebrated as Draven. A former soldier, he found that the crowds uniquely appreciated his flair for the dramatic, and his unparalleled skill with his spinning axes. Addicted to the spectacle of his own brash perfection, Draven has sworn to defeat whomever he must to ensure that his name is chanted throughout the empire forever more.

Wukong is a vastayan trickster who uses his strength, agility, and intelligence to confuse his opponents and gain the upper hand. After finding a lifelong friend in the warrior known as Master Yi, Wukong became the last student of the ancient martial art known as Wuju. Armed with an enchanted staff, Wukong seeks to prevent Ionia from falling to ruin.

Wukong will be available later during this patch.

We’re standardizing the cost of ultimates and nerfing mana regen for around half the roster. These changes are shown in the section below this one. More significant changes are still here!

Gragas’ ult is much harder to land in Wild Rift, and it’s a huge part of his play-making potential. We’re making it a bit faster so he can start the party a bit sooner.

Janna has slowly fallen off, when her core fantasy should be intact as a highly mobile poke and protect champion. We’re putting the wind back in her sales by buffing up her (2) Zephyr and (3) Eye of the Storm.

Shyvana has been more dragon than human with the way her fireballs have been hurting. Here’s some math to help cool her off.

Tryndamere was pretty average before the crit item nerfs, and he felt weak after we swung the nerf bat. We’re giving him a little something more to rage about.

We’ve heard feedback from TF players that his deck takes a little too long to search through, so we’re making his cards rotate quicker.

We’ve been feeling that mana costs in the early game are a bit too generous for the majority of the champion roster, which has led to some very low consequence early-game decision making. We’re also taking the time to do some ultimate mana cost standardization while we’re at it. All other champion changes are above.

We’re taking a look at the feedback around tanks feeling weak and making some adjustments to both tank and anti-tank items to get the big boys and girls back on the frontlines.

We are standardizing Grievous Wounds (healing reduction) durations across the board. This change should give tanks a slight buff, but we’ll be keeping an eye on other impacts.

Stuns feel extra long on Wild Rift, and Merc Treads are being outclassed by other boot upgrades. Hopefully a small upgrade on this option’s Tenacity (crowd control reduction) will make them more appealing.

These changes should help champions deal with heavy auto-attacking marksmen.

Relative to other Enchants, Gargoyle was very weak and wasn’t worth buying on tanks. We are significantly powering it up.

Fimbulwinter is a new Tear of the Goddess item that’s very strong on specific tanks. We are nerfing it so those tanks aren’t permanently shielded.

Similar to League of Legends on PC, we’re replacing Cooldown Reduction with a stat called Ability Haste. Previously, for an ability with a 100 second cooldown, your 31st point of CDR removed 1 more second off its remaining 70 second cooldown. This reduction is more than 1% of its current value which meant each point of CDR became more and more valuable as you stacked it, forcing us to cap it at 40%.

Conversely, every point of Ability Haste allows you to cast abilities 1% more frequently which means it’s a linear increase in power progression as opposed to CDR’s increasing value per point. Because of this, Ability Haste has no cap which should also allow you to flex your build choices to reflect the needs of the situation more as opposed to planning around a limit. To illustrate the concept a bit more, having 100 Ability Haste means you can cast abilities 100% more frequently (double the amount of casts!), but you’re gonna have to really commit to getting 100.

Below is a list of all changes happening as a result of the stat change. We leaned a bit more on the conservative side with the tuning on this change so we do expect we need to do some changes in following patches to get things just right.

For the math nerds, the exact formula for how much Ability Haste equates to CDR is as follows:

We want taking Dragons to be impactful, and eventually, Wild Rift will adopt the Dragon Soul system in the future. These changes are the first step toward that!

Junglers sometimes hit level 5 before laners, so we want to delay jungler speeds a little. This should also relieve some pressure on the jungler to use Smite before their first camp reaches the spell’s execute range.

Fleet is appropriately powerful in PvP situations but the amount of sustain it was providing for safer ranged champions felt too strong, particularly in the early game. We’re taking a lesson we learned from League PC and adding a constraint so that ranged laners don’t get to ignore poke completely by taking Fleet Footwork.

Added a limit to gifts sent in one day

Chat settings will now default to off until account level 8, when team chat will be available by default. Players can opt in to chat at any time. 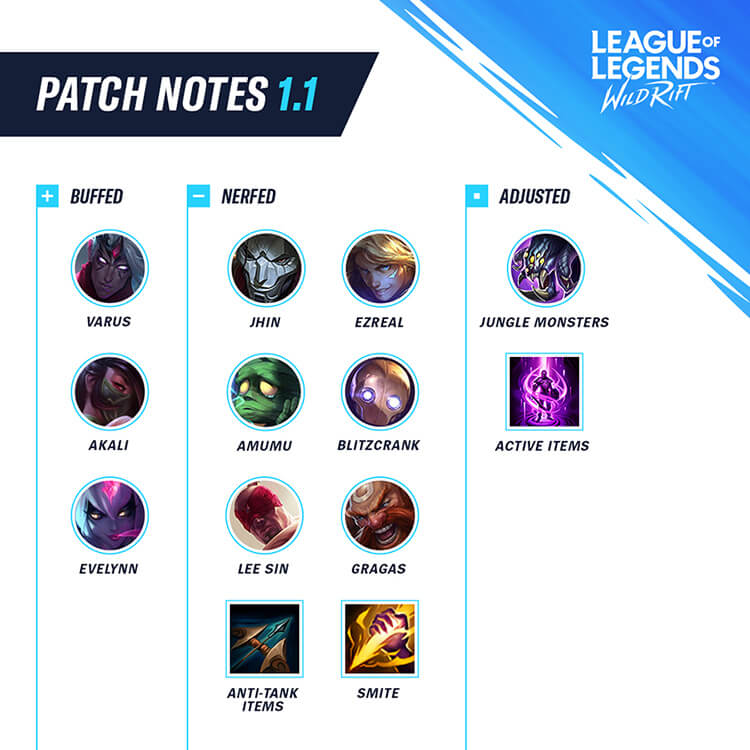 Jhin has been over-performing in every phase of the game so we are reducing some of his power in general. His traps also gave him too much guaranteed utility when he should be using them as a combo with (2) Deadly Flourish.

No more Mr. Weak Varus. Time to bring this blight boy more in line with the other marksmen.

Ezreal has been dishing out strong damage while staying safe a little too safe. We’ve pulled back his damage a little more and increased his (3) Arcane Shift cooldown so jumping into a fight is riskier.

Akali has been especially weak since her release. We’ve given her some better ways to survive the laning phase and capitalize on outplays like the rogue assassin she is.

It’s play time! We are giving Eve a little more range on her (1) Hate Spike so she can more easily land charms and contribute to long fights.

The Sad Mummy’s meltdowns are getting a little out of control. We wanted to tone down his damage a bit and offer some breathing room to opponents that get caught in his curse.

You can always count on Blitzcrank to lend a hand. But lately he’s been a bit too reliable as a source of engagements for his team. We tuned his reliability down a lot so opponents can punish him when he makes a mistake.

Lee Sin should fall off more as the game progresses, so we’ve scaled back the mobility and survivability he gets in the mid-game from maxing (2) Safeguard. Even a blind, fighting monk needs a weakness.

Ever since we adjusted his (4) Explosive Cask missile speed, Gragas has really turned his life around and become a reliable champ. But we’d rather have him disrupting the enemy team than blowing them all up instantly. We reverted some of our prior buffs to keep him in check.

Tank items have felt a bit weak lately, and we noticed that Last Whisper and Mortal Reminder were making it too easy to counter such builds. We are tuning these two down for now and will keep an eye on how tank builds perform.

We’d like to see more active-item diversity, so we’ve made some changes to buff new strategies and nerf those that are too easy to pick up.

We’ve seen your feedback (thank you!) that the game has felt too dependent on the duo lane snowballing. We’ve tuned down the amount of experience champions can share to draw some focus to the other lanes.

We’re all for wild, creative strategies, but taking Smite as a laner is something we’d like to discourage for the health of the game (it skews the jungle meta and can lead to less interactive laning). For those reasons, Smite now reduces XP gained from killing minions by 20% for the first 5 minutes of the game.

More ganks! More picks! We’ve increased respawn times on some jungle objectives to give teams more time and opportunity to outplay their opponents before hustling off to the next objective.