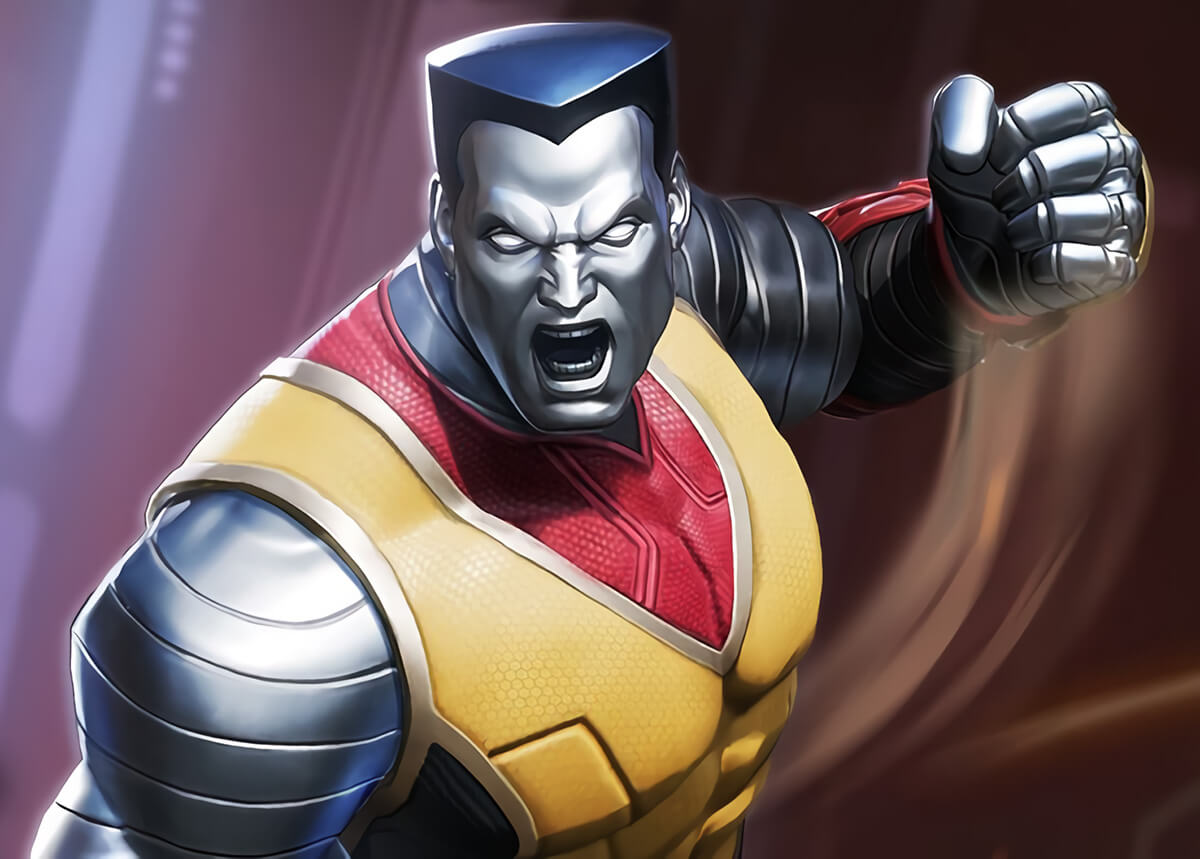 On August 6, 2020 (Thursday) at 5:00 AM. The new roster of heroes that are free to use in 5v5 battles are: Ancient One, Captain America, Corvus Glaive, Gambit, Lady Sif, Mantis, Mysterio, Rocket Raccoon, Scarlet Witch, and Storm. Go forth into battle, Watcher!

Colossus is a tank hero who specializes in crowd control. His special metallic body allows him to resist damage and deal powerful strikes against his enemies.

This ability grants him slow immunity while in effect. This effect will recover full stacks after exiting combat.

Colossus pushes enemies within a specified range into the middle and deals damage. If there are multiple enemies within range when he strikes, he will also knock down enemies heroes in range.

Colossus punches in the direction of the specified target, dealing damage and slowing them.

If this ability deals damage to heroes, Colossus will gain an Acceleration effect. He can use this ability again within a certain period of time to charge at the specified enemy, dealing damage and knocking them down.

When a nearby hero is knocked down, Colossus can cast this ability to deal damage and inflict a Break effect. He also deals damage to enemies near the target.

All Colossus (Piotr Rasputin) data has been collected. He will be joining you all in battle this week, and his Ultimate skin will be added to the Shop.

From today until 11:59:59 PM on August 12th, all Watchers can purchase the Colossus Data Pack, as well as recruit this hero and unlock his skins! There’s even a 20% off discount on this pack in its first week!

When Mysterio casts Deadly Orbit, he gains a powerful shield and can use Perilous Fog to deal multiple hard-to-dodge attacks. For this reason, we have weakened Deadly Orbit’s defense stats and passive non-fatal damage while maintaining Perilous Fog’s core damage capability to clarify the purpose of this ability and make it easier for his opponents to confront him.

Hela has a significant speed burst after casting Nightsword, and she has extremely high initiative during early game battles. Additionally, Hela’s ability to quickly clear the jungle gives her a huge advantage in the early game. Thus, we have weakened Hela’s jungling efficiency and acceleration to reduce her early game capabilities in battle.

Spirit Drain no longer inflicts a slow effect by accident and cannot be cast while moving.

Sandman’s capabilities in the laning stage exceed the average capabilities of tank heroes, so we have slightly reduced his Ability 1 damage and passive recovery value in the early game to weaken his laning ability.

We hope that, as an energy hero, Iceman can benefit more from his energy attacks. Therefore, we have adjusted Iceman’s base damage and energy attack enhancement to boost his damage output. We have also optimized the activation logic of Freeze to increase the difficulty of causing continuous freezing and enhancing the effects of a single Freeze.

Dealing damage to frozen enemies will no longer stack Freeze.

Cull Obsidian’s Ability 2, which is his primary damage ability, has an excessively low hit rate, thus limiting his performance. Therefore, we have shortened Ability 2’s delay to increase its hit rate.

Furious Trample’s Stage 1 delay has been reduced from 1.25 seconds to 1 second.

All Watchers can claim rewards by completing daily quests during the event! Log in for a total of 7 days to claim the Street Sports avatar!

Optimized the artwork of some icons in the game.

Edited the tactic text descriptions for Accelerate and Dispel to match the actual effects.