The iconic time-attack dungeon of MU Legend, Blood Castle, is a special dungeon that players at Lv. 45 and above can enter from the Room of Duty. The main rewards include Magic Gems and Hero Tokens, but the faster you clear it within the 10-minute limit, the more rewards you can get.

The dungeon is a time-attack dungeon.

That’s why it’s important to clear Blood Castle as fast as possible, and most players focus their energy on doing just that to get more rewards. However, getting through it quickly is no easy feat when it’s divided into 3 stages: gate destruction, 9 waves of multiple monsters and the boss Anilata.

The Faster You Clear It, the More Rewards You Get

You can enter Blood Castle 2 times a day from the Room of Duty, and you must be Lv. 45 or above to enter. There’s also a time limit of 10 minutes, and it is a time-attack dungeon. The main rewards are Magic Gems, Jewels of Bless, Skill Crest Cubes and Hero Tokens, and the faster you clear the dungeon, the more rewards you get.

In other words, the longer it takes you to complete it, the fewer rewards you will get. The number of rewards given is divided into 10 stages; 1 for each minute of the 10-minute time limit. Since you can enter 2 times a day, if you can complete it in 1 minute each time, you can get a total of 14 Large Magic Gem Pouches and 6 Small Magic Gem Pouches each day. This adds up to a total of 10,800 Magic Gems, 22 Hero Tokens, 14 Jewels of Bless and 10 Skill Crest Cubes!

Because of the many rewards that you can get in proportion to the time spent, it’s known as one of the most fruitful dungeons in MU Legend. Auto Party Matching is available, but since the rewards change according to the time spent, players usually find their own party members. 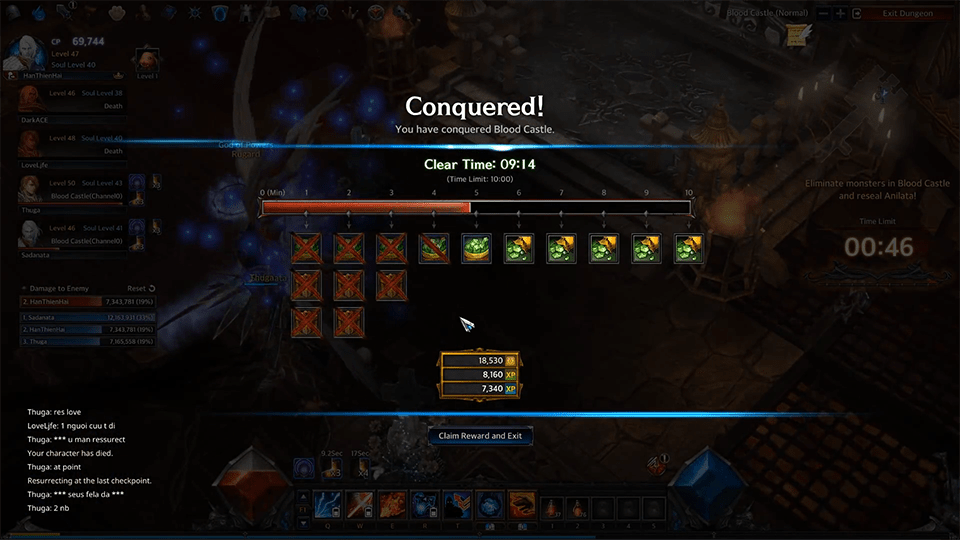 Rewards differ according to the time spent completing it.

Order 1: Enter and Destroy the Gate

To save time, you can defeat those monsters along with the others inside the castle after destroying the gate. Players who try to run Blood Castle for the first time usually try to defeat the monsters on the bridge first, but it’s usually a waste of time.

If you ignore the monsters, the gate is relatively easy to destroy and it doesn’t take long to get inside, so it’s a better strategy. 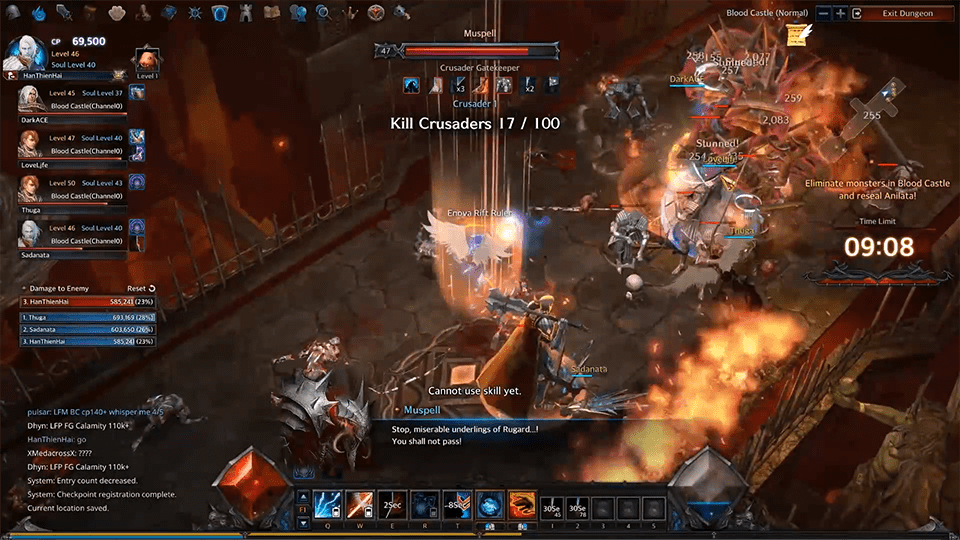 The 10-minute time limit starts once you enter. 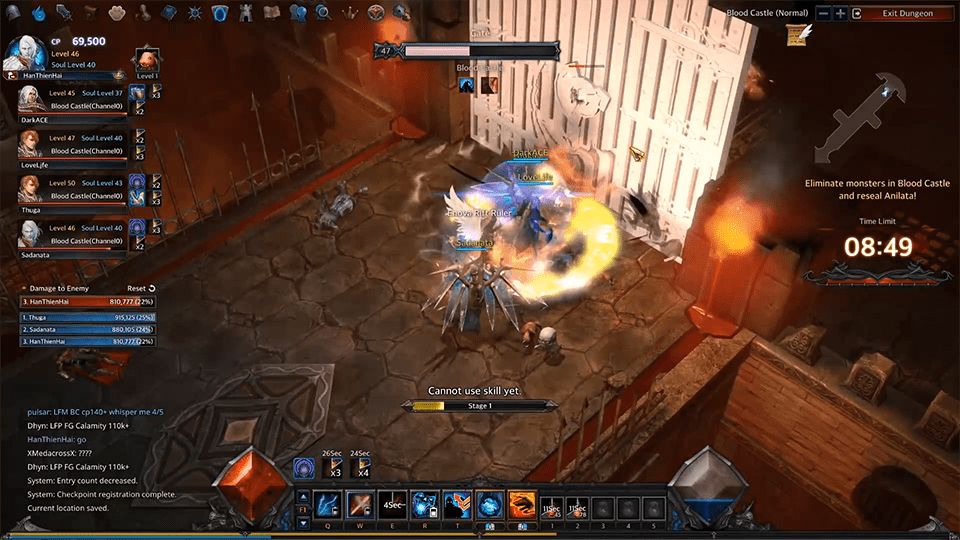 Destroy the gate as fast as possible.

Once you enter after destroying the gate, there will be 9 waves of monsters. Many monsters will come out with each wave, and in order to save time you will have to gather them all in one place. The Dark Lord’s Taunt skill will be useful, and each character’s AOE skills are very important.

As you destroy monsters, you’ll see Light Crystals drop. When party members get close to these crystals, they will get various buffs such as increased speed, HP and MP recovery, and all attacks +5. Collect and use them during battle to reduce the time to complete the dungeon.

White Crystals deal an area attack called the Rage of God. This attack affects the entire dungeon and will be useful in defeating monsters as quickly as possible. These types of crystals are most effective when there are large hordes of enemies.

Also, once you reach the final wave after defeating the monsters, you will face Pandemonium Auxiliary Commander Dullahan. Dullahan has melee attacks, charges to the front and sends shockwaves. His attacks are not strong, but his defense is greater than normal monsters, so it might take longer to defeat him. 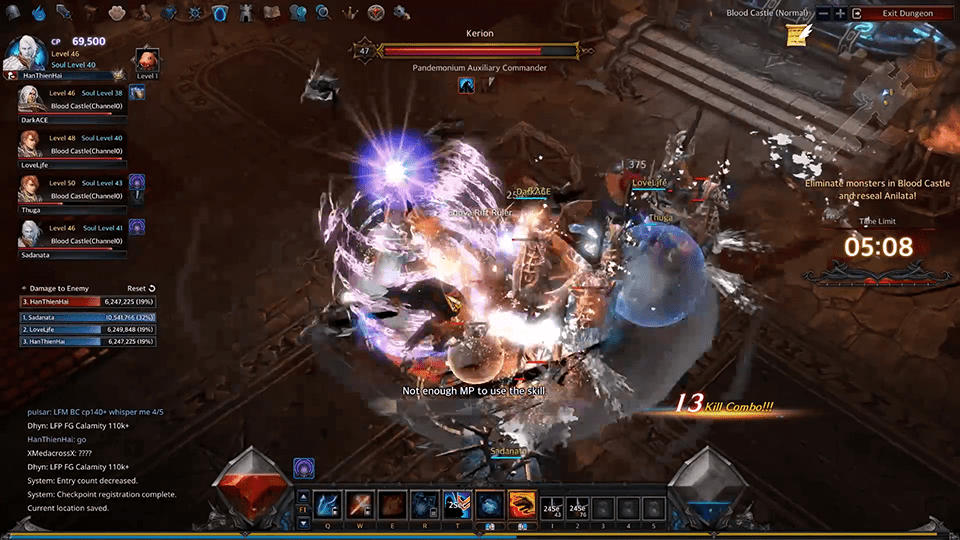 Dullahan appears in the last wave.

Once you defeat Dullahan, you must destroy the Crystal Coffin where Anilata sleeps. Once the Crystal Coffin is destroyed, you’ll meet Anilata, the final boss of Blood Castle. Anilata’s high HP and powerful attacks make him very hard to defeat.

Focusing on wildly attacking in order to save time might result in death, so be sure to evade attacks that could kill you in one strike. Anilata is mainly a melee attacker, but he also has ranged attacks that deal shockwaves, so don’t let your guard down!

His main attacks include releasing deadly shockwaves to the front and a charging attack where he dashes at an angle 3 times while slashing. The charge attack is very powerful, so you’ll have to watch out for it. The path will be illuminated on the ground in the moments before the first charge, so you can dodge it if you act fast.

The second and third charges form a triangle from the first charge, and Anilata will return to his original location at the end. In order to dodge the charges safely, move behind Anilata before the attack begins (or simply get out of the skill’s range).

Anilata’s shockwave attack with his sword is also very powerful. For this attack, he rams his sword into the ground and sends out shockwaves. Again, you will be able to tell when it’s coming because the ground will emit purple pillars of light in the path of the attack, so it won’t be too hard to dodge. Players who are too close will have trouble dodging it, so it’s recommended to move back when not attacking. However, ranged players can dodge the shockwave area and continue to attack. 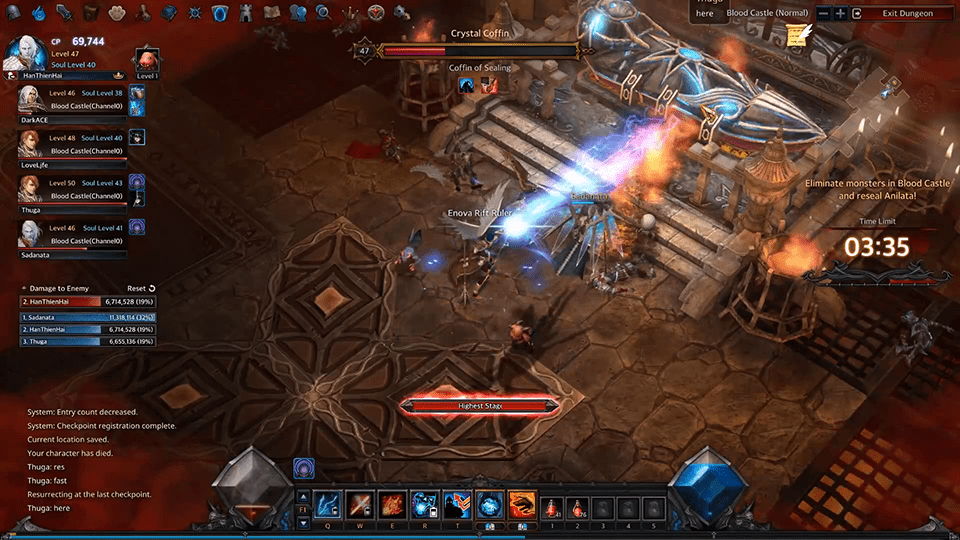 Anilata awakens from the Crystal Coffin. 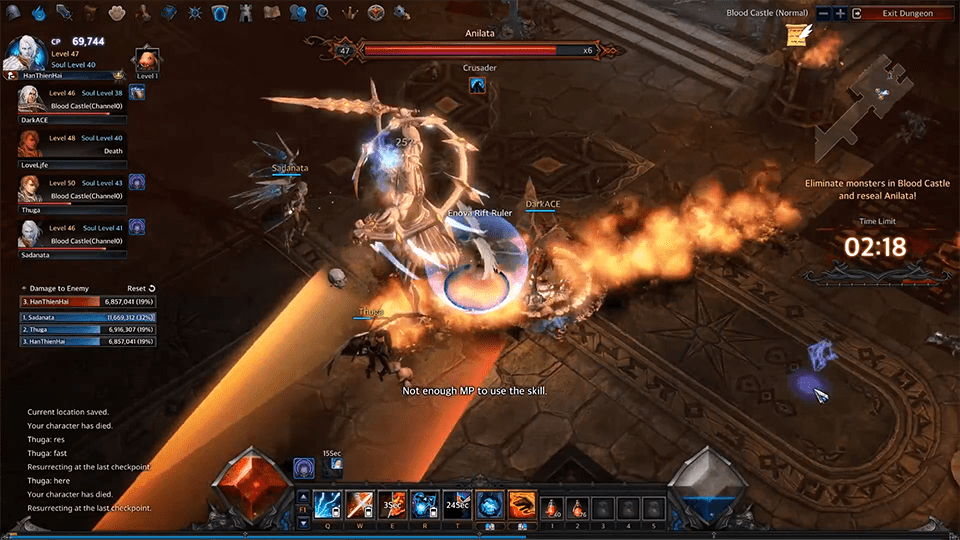 You must find a good location to dodge his attacks before they are initiated.

Webzen has announced Mu Legend new class Spellbinder will be arriving in March 2018. The Spellbinder is a support mage that employs psychic power to strike foes with levitating swords and throwing weapons.

Webzen has announced MU Legend new update Faction War will release on January 9th, 2018. Homil, Content Developer for MU Legend, said "The Faction War is a massive and unique feature that is quite different to the sieges that you may have experienced in other online games."