Onmyoji Arena will change the lineup of the limited-time free shikigami at 5:00 AM on January 3rd, 2021. The new free shikigami will be Tesso, Umibozu, Ebisu, Kyonshi Imoto, Yumekui, Dai Shimei, Dodomeki, and Ittan-momen.

Onmyoji who own the God of Fortune Month Pact will have the additional free shikigami, Ootengu and Asura.

Of these shikigami, Dodomeki and Ittan-momen have a difficulty of Hard. Onmyoji who have been in Heian-kyo for less than 7 days can’t use them in battle for free.

Ungaikyo is a Mage shikigami, with abilities that can restore his own HP as well as powerful control abilities. He has two forms, Yin and Yang. He can actively switch between these two forms, or he can automatically switch forms when he is sealed to ensure damage dealing. Different forms provide different damage and control effects, and switching forms flexibly according to the specific situation can maximize damage and control on the battlefield. 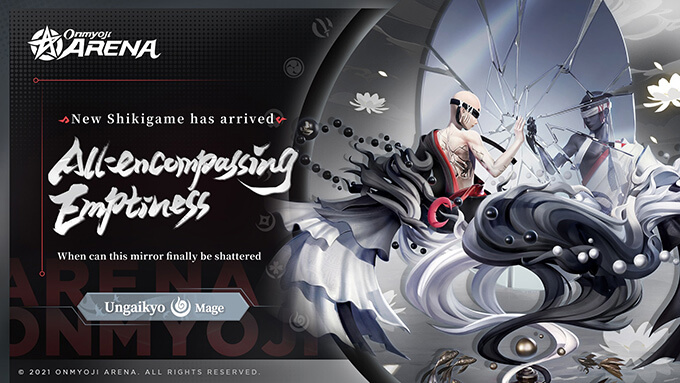 Ungaikyo has two forms, Yin and Yang. Each form has independent HP. When sealed, he will switch to his other form automatically, and the sealed form needs to restore a certain proportion of HP before it can be used again.
When Ungaikyo deals damage to the enemy, he restores HP to his other form.

Ungaikyo releases a lotus illusion to a designated location in front, dealing AoE damage and inflicting a Slow effect, the illusion range and damage will increase when charged.

Ungaikyo summons two lotuses to knock up enemies within a fan in front to its center and deal damage. If there are 2 or more enemies, it will inflict an additional Stun effect.

Ungaikyo records the status of himself and the ally shikigami around him, and leaves a mirror image of the recorded shikigami in the same place.

Passive effect: When Ungaikyo deals damage to enemy shikigami, he will accumulate Bad Karma, and when he accumulates 6 points of Bad Karma, the next 3 basic attacks will deal bonus damage to the target and their surrounding enemies.

Ungaikyo summons 6 Buddha Beads around himself, each of which will deal damage and slow down enemies. Charging increases the casting range.

Ungaikyo throws a lotus in the specified direction. Casting the ability again will instantly move Ungaikyo to the lotus’s location, dealing damage and inflicting a knockup effect to surrounding enemies. After hitting an enemy, he will gain a Haste effect and Shield.

Ungaikyo deals AoE damage to the enemies around him, while recording the status of enemy shikigami in range. He leaves a mirror image of the recorded shikigami in the same place.

Mirror State – Yin: While the ability lasts, if the recorded shikigami step out of a certain range centered on the mirror image, they will be directly pulled back to the recorded position, and will be Immobilized.

This week sees Ungaikyo make his debut on the Heian-kyo battlefield.

The All-encompassing Emptiness Selection Pack will also be available in the General Store. The selection pack includes the new shikigami Ungaikyo, Dyed Skin: Corrupt World, Evolved Form Amulet x1, Taichi Mudra x1, and Witchery Bell x8. You can select which to purchase! The All-encompassing Emptiness Selection Pack will be available till 11:59 PM on January 13th, 2022. Don’t miss out on this chance to get Ungaikyo!

Daruma Blessing has new goods! Accumulated rewards have been reset!

The Daruma Blessing event’s prize pool has been expanded to include non-time-limited skins released before February 7th, 2021. We have also reset the total number of item redemptions and total draw attempts.

We have completely revamped the in-game voice system and fixed several issues that affect the in-game experience. We have also added a control panel for the voice channels. We hope that everyone will be able to communicate smoothly with their teammates using the voice system.

The control panel for voice channels has been added to the Team screen, shikigami selection interface screen, and in battles. You can adjust the channels of the microphone and speaker using the control panel.

Fixed the issue of disconnecting from the team voice channel when selecting “Fight Again” in the results screen under some circumstances.

Fixed the issue of the voice channels changing automatically under some circumstances.

Fixed the issue where the in-game audio would sometimes play using speakers even when headphones are connected when using voice chat.

Fixed the issue of sometimes not being able to use the voice input after switching on the microphone.

In order to make it easier for Onmyoji to view the skins you have collected, and to solve the scattered lore of multiple skin series problems, lack of collection overview, tedious and single display, and cumbersome operation, we have launched a new Gallery system.
It is divided into four modules, namely Skin Collection, Diversified World, Shikigami Scroll and My Achievements. Among them, Skin Collection and Diversified World are the new collection categories in the Gallery this time.

In Skin Collection, all Onmyoji can review all skins owned currently, and we make a separate display page according to Quality, Shikigami, and Time Obtained for you to view skins you owned in different categories. You can view the number of skins of each quality you own currently more intuitively.

Diversified World is one of the characteristics of Onmyoji Arena, and also a significantly important part of the Gallery system. It mainly contains skins of different backgrounds currently available in Onmyoji Arena. We have also added an entrance to the Lore Theme Site, so that you can better enjoy and understand the splendid world of Onmyoji Arena.

Additionally, we have also prepared collection rewards for all Onmyoji who are keen to collect. Collect all skins included in the current series to obtain Dynamic Exclusive Avatar Frames, Dynamic Exclusive Titles, and in-game Exclusive Nickname Frames. 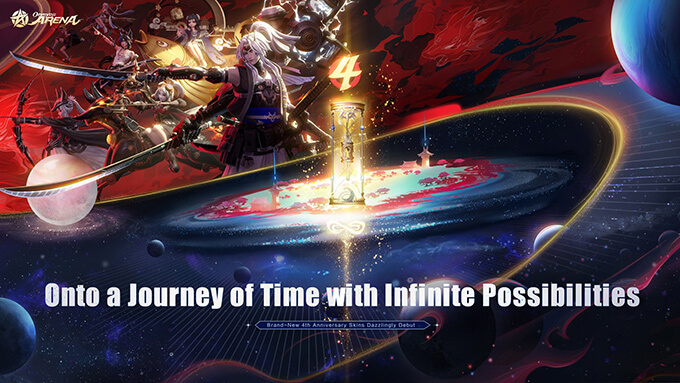 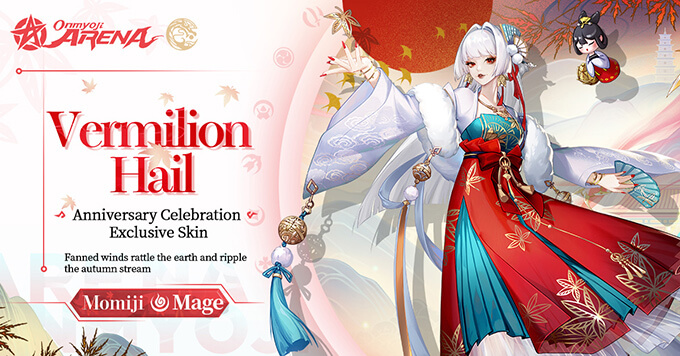 Eaves Under the Moon 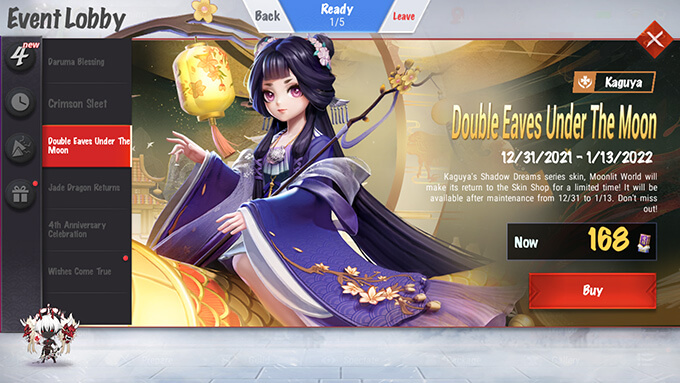 Kaguya’s Shadow Dreams series skin, Moonlit World will make its return to the Skin Shop for a limited time! It will be available from December 31st, 2021 after maintenance to January 13th, 2022. Don’t miss out! 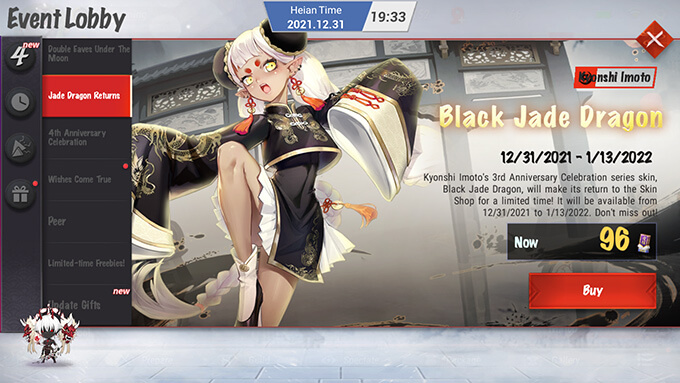 Kyonshi Imoto’s 3rd Anniversary Celebration series skin, Black Jade Dragon, will make its return to the Skin Shop for a limited time! It will be available from December 31st, 2021 to January 13th, 2022. Don’t miss out! 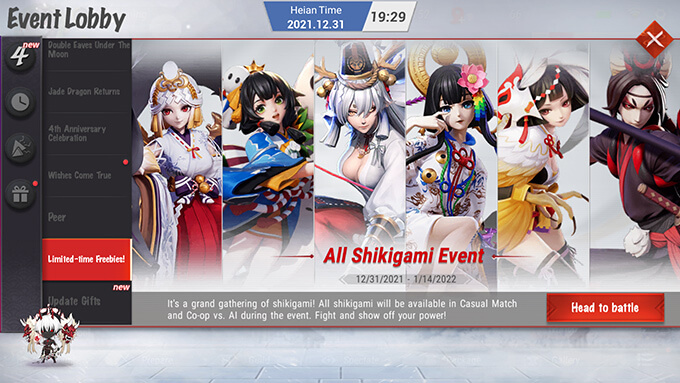 All shikigami will be available in Casual Match and Co-op vs. AI during the event. Don’t miss this chance to battle to your heart’s content! 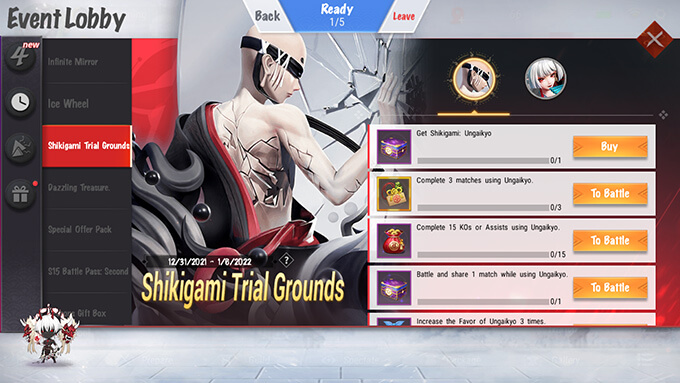 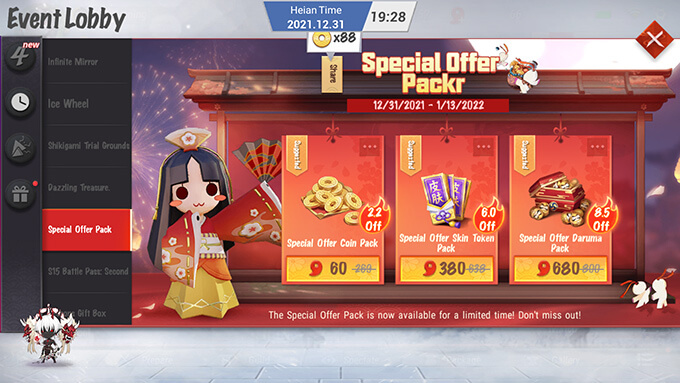 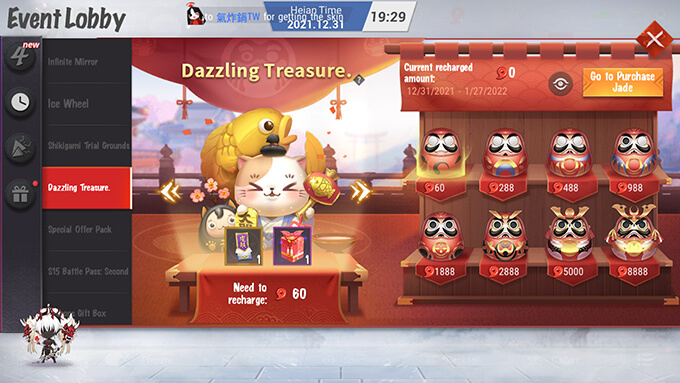 During the event, if your recharge meets the requirements, you can get rewards including Skin Tokens, Skin Token Vouchers, Evolved Form Amulets, a rare avatar frame, and Auspicious Daruma Medals!

Because the bonus and trigger range of maple leaf doll are difficult to judge, resulting in negative experience due to damage loss, we decided to remove the distance limit of Ability 1 Maple Puppet.

The damage ability of Shiro Mujou is a bit too low compared to the difficulty of its ability to hit, so we appropriately increased his damage.

Adjusted cooldown from 11 seconds to 10 seconds.

Asura’s suppression is strong in the early and mid game, so we decided to lower Ability 1: Lotus Extermination Melee form’s recovery effect and damage ability and flexibility while Rationality is at 0.

Ability Power to HP conversion ratio adjusted from 2.4 to 2.8.

Adjusted cooldown from 8 seconds to 7 seconds.

The overall performance of the Vampira is slightly weak. We will increase its passive bonus to improve her performance when at a disadvantage, and slightly increase the recovery ability and casting frequency of Ability 2.

Yumekui is relatively weak among the Tank shikigami. Hence we will increase his control strength and mobility.

Adjusted time to reach maximum speed from 4 seconds to 3 seconds.

Adjusted cooldown from 12 seconds to 11 seconds.

The current performance of Hana at Mid Solo is better than as Support. We hope to appropriately increase Hana’s strength as Support without weakening her strength at Mid Solo.

Adjusted Damage Conversion Ratio from 9% to 10.5%

Fixed an issue with the gem disappearing from Hana’s navel during the still frame of the close-up scene and yellow skin on the side when rotating of Hana’s Fleeting Moonlight.

We have partly updated the screen for when you successfully match in a Rivalry game, to further optimize the visual performance when matching. The main update is to the effect of the matched screen in Lobby: Spring Sakura, Lobby: Winter Snow, Lobby: Neon Rain, Lobby: Bronze Daylight, and Lobby: Algae Sea Night Tide. The successful match screens for the remaining Lobby Scenes will be updated gradually.

The shikigami difficulty of Kuro Mujou, Hone Onna and Enma has been adjusted from Hard to Medium.

The Lobby: Winter Snow is now available for a limited time from December 31st, 2021 to March 3rd, 2022. During this period, you can use the lobby scene for free.