The Joker is categorized as a marksman/long-range harasser in the game, but in fact I think he is better classified as an assassin. The Joker has an extremely long attack range, really fast ability CD time and can deal enormous damage in a short period of time. On top of all that, he is immune to physical damage within a 2-second ability time window alongside a speed increasing skill, all of which allow The Joker to cut through squishier heroes like butter. 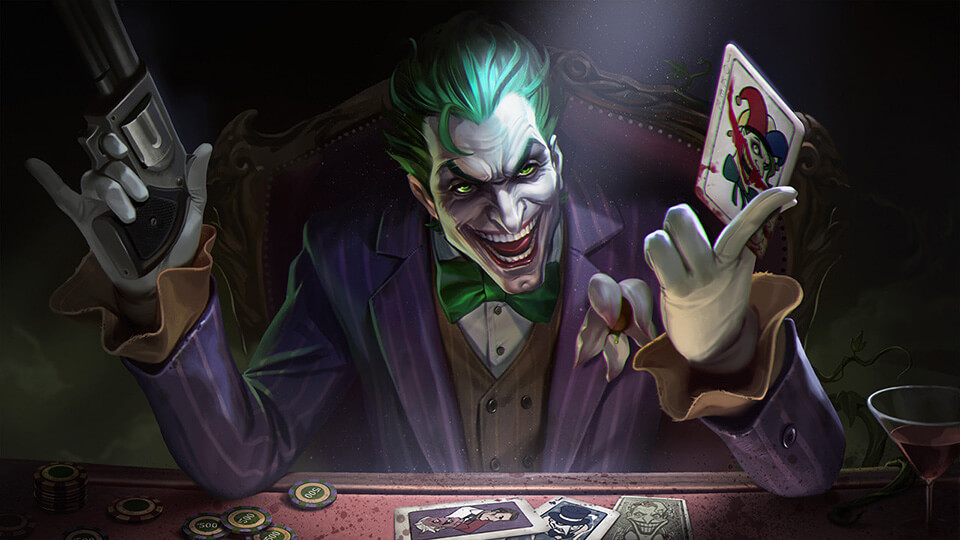 The Joker can be very aggressive in the early game. If you know how to use his passive and first skill in succession, you can scrape off at least one fourth of the health of most glass cannon heroes, like Violet. The abilities of The Joker ensure that he can not only play in the top, bottom, mid lanes but also as a wandering support. The best part is, the arcanas and item build of The Joker are basically fixed, no matter if the game is going well or against your team. Therefore, I highly recommend newbies who lack arcanas or those who aren’t familiar with how to adjust items to give The Joker a try.

As mentioned above, The Joker is actually a very versatile hero and can play in most positions, but I personally recommend The Joker in mid lane. This is because The Joker can clear waves of minions faster than most mid lane heroes and can then assist the jungle to gank other lanes and accelerate gold accumulation as the game progresses.

As for the talent, I choose flicker in most cases, because although The Joker is already armed with 2 invincible skills, these abilities are limited by a couple of restrictions, therefore it is preferable to take flicker and increase The Joker’s unpredictability and agility. Flicker can be used to flee or to enter the fray, both are commonly used and require frequent practice to master.

Try to clear waves of minions with your first ability before they collide and cluster: remember that this ability deals damage in a straight line and therefore the angle has to be calculated carefully. By clearing the lane faster than your opponent, you earn time to assist other lanes and lower your risk of being ganked by the enemy.

The first ability is The Joker’s core skill, so try to hit your opponent as you creep. You can also use your 90% movement impairing passive first, then loosen your first skill as fast as possible. Most heroes without escape skills will have to bear all the damage without a chance to dodge.

To play The Joker, enemy positioning and predicting is critical. The hit rate of the first skill can determine who is the better Joker. Try to observe the movement patterns of your opponent and predict where to launch your rocket. Poking your opponent while simultaneously clearing minions is a plus.

The Joker’s second ability can gain immunity and remove movement impairing effects, and can also dodge control skills such as stuns and knocks for a very short period of time, although the intro on the official website suggests otherwise. Try practicing escaping control abilities, as this can greatly increase your survival rate and buy you and your teammates more time and space to attack.

The Joker has a large variety of skill combinations which rely heavily on the experience and damage prediction skill of the player. For example, you can camp in the bushes and ambush your enemy unexpectedly with the assistance of Omni Arms, then use your ultimate to reap your kill.

For The Joker, I recommend boosting your physical damage and armor pierce:

You can also choose to insert a few pieces of benevolence or reave (both purple). Benevolence allows you to and increase your HP slightly while reave gives you the stamina to stay active in lane longer.

For The Joker, I recommend the following item build:

In-depth Item Guide for The Joker

The Rank Breaker, Omni Arms and Muramasa are all core items to The Joker’s item build. The last item slot can be filled with Death Sickle, Curse of Death, Ancestral Glory, Uriel’s Brand, Medallion of Troy and Hercules’ Madness… etc are all suitable items and can be purchased according to battle scenario.

If the enemy team has high magic damage or has many CC heroes, you can swap your boots for the Gilded Greaves (magic defense shoes) and start assembling Ancestral Glory in the late game. If you die, sell Death Sickle immediately and buy Ancestral Glory; it’s the same with Hercules’ Madness. Not everyone can finish this item exchange in such a short time, but you can try it out if you have confidence in your finger speed!

If you plan to use The Joker as a wandering sup, swap Omni Arms for Curse of Death so you suppress heroes that rely on their life recovering abilities, like Lauriel, Lubu, Taara, etc.

Aydan is the Arena of Valor pro league coach for the J Team in the Garena Challenger Series pro league in Taiwan. You can discuss with him about The Joker guide on Arena of Valor official forum or his Facebook page.