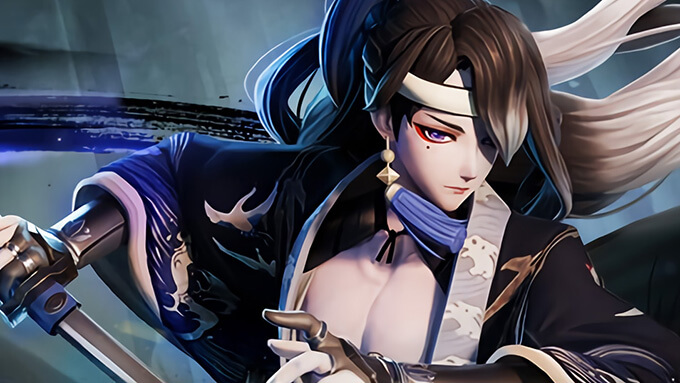 Onmyoji Arena will change the lineup of the limited-time free shikigami at 5:00 AM on December 30th, 2019. The new free shikigami will be Dodomeki, Umibozu, Tanuki, Shishio, Yuki, Aoandon, Ichimokuren, Kyonshi Ani, and Yamakaze.

Of these shikigami, Ichimokuren, Kyonshi Ani, and Yamakaze have a difficulty of Extreme. Onmyoji who have been in Heian-kyo for less than 7 days can’t use them for free in battle.

This week sees Ittan-momen make her official debut on the Heian-kyo battlefield. Her Weave dyed skin is also available to purchase in the Skin Shop.

1. To make it more costly for early-game shikigami to cut off a lane after entering behind an opponent’s turret, we’ve made a minor map modification and added a mechanic that increases the damage that minion waves deal when behind a turret.

Map modification: Added routes for enemy shikigami to enter your 1st and 2nd turrets from the jungle.

Minion wave mechanics: When lane minions enter the attack range of your outermost turret, they are granted 60 Armor and Magic Resist and will deal bonus damage equivalent to 1.25% of the target’s Max HP. They are also able to interrupt shikigami’s level-up recovery.

2. Vision mechanics modification: The current vision mechanics for lantern occupation mean that for the losing side, the lantern outside your jungle is frequently under your opponent’s control, while the inside lantern is insufficient to ensure your safety when entering the jungle. The lack of vision means that players usually don’t dare enter the jungle when fighting over Orochi and Kraken.

We will replace the original lantern occupation mechanic with Lantern Souls, which will be located where the inside lanterns used to be. These Lantern Souls spawn 3 minutes into the match, and you can choose one of your two jungles in which to activate them. Once activated, a Lantern Soul will patrol around the jungle and disappear when destroyed or after 60 seconds. A Lantern Soul can be activated again 80 seconds after it was last activated. When a Lantern Soul is attacked or it discovers an enemy shikigami within its range of vision, it will autonomously pursue and attack, as well as inflict a brief vision exposure effect and Armor and Magic Resist reduction effect.

The Heian Festival has begun! Take part in the Album of Memories event to progressively unlock pictures in five chapters and look back over the adventures of the past year. You can also get the Heian-kyo – 2nd Anniversary avatar frame, Blessing Daruma, Trailing Pet Trial Card, 2nd Anniversary Expression, Summon Amulet (Unowned), and other rare rewards!

The Ema Wish event has officially started! Log in every day and fill in your best wishes to randomly obtain an Advanced Favor Item Pack or Wish Ema.

Get ready for New Year Clothes! Log in to the game during the first week of the 2nd Anniversary Celebration to claim an Epic Skin Box (Unowned)!

Get ready for the Free Shikigami Event! All shikigami will be available in Casual Match and Co-op vs. AI during the first week of the 2nd Anniversary Celebration. Don’t miss this chance to battle to your heart’s content!

Kosodenote’s commemorative 2nd Anniversary skin Beacon Communication is available for a limited time from 12/27 to 1/16, with a 30% discount during the first week. Don’t miss out!

The Events screen has a new look! During the event, if your recharge meets the requirements, you can get rewards including Skin Tokens, Evolution Amulets, and a rare avatar frame!

After 2 weeks of intense combat, the Support Tournament has finally reached the Top 12 stage! Join in and show your support for your favorite shikigami!

Daruma Blessing has also been updated for the 2nd Anniversary Celebration!

3. Daruma unlock progress has been reset.

4. Now you can view a prize pool preview and close-ups of royal skins on the Daruma Blessing screen.

The Peer II achievement has been added to Achievements – Other. Sign in for 500 days in total to earn this achievement and claim the Walk Together – Precious avatar frame.

To thank everyone for their support, we’ve added unified seal effects for all royal skins. What’s more, there will also be an all-new frame around your nickname in a match when you use any royal skin.