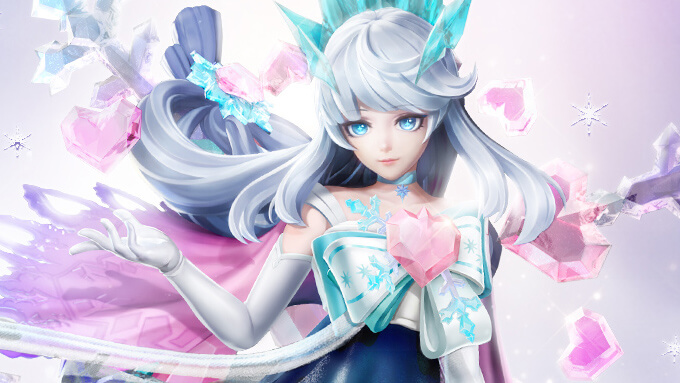 Onmyoji Arena will change the lineup of the limited-time free shikigami at 5:00 AM on February 24th, 2020. The new free shikigami will be Tesso, Hana, Shuten Doji, Kyuumei Neko, Oitsuki, Kiyohime, Lord Arakawa, and Kosodenote.

Of these shikigami, Lord Arakawa and Kosodenote have a difficulty of Extreme. Onmyoji who have been in Heian-kyo for less than 7 days can’t use them in battle.

Among Mage shikigami, Menreiki currently has no advantage in the early, mid, or late game. We have increased the Ability Power bonus and explosion range of her Ability 1 to boost her strength.

Increased the projectile’s explosion splash range from 120 yards to 150 yards.

Yasha can use his Ability 1’s mark to frequently use the displacement ability, making Yasha rather difficult to use and even causing proficient players to have trouble handling him. We have slightly adjusted the Ability 1 cooldown reduction granted by breaking the mark, and we have also slightly increased his Ability 1 damage as compensation.

Adjusted the cooldown reduction granted by breaking the mark from 1.5 seconds to 2 seconds.

As her level increases, Ittan-momen’s speed of wiping out monsters gradually falls behind other Jungler shikigami. In teamfights, she relies more on the hits of her Ability 3, and her survivability is rather poor. We have made suitable adjustments to increase Ittan-momen’s damage to monsters in the mid to late game, and we have also slightly increased her stability in mid to late-game teamfights.

Adjusted maximum damage to monsters from 450 to 400+25xLevel.

Aobozu’s Buddha’s Heart Form already has control from both his Ability 3 and ultimate ability, and with significant Slow from his Ability 2, his control capabilities are a bit overpowered. We have decreased the Slow duration of his Ability 2.

Currently, Demonbane Form is rather weak, so we have also increased the damage and cast range of Demonbane Form’s ultimate ability to boost his finishing ability.

Although Chin has strong burst capability, her DPS relies quite a bit on her Ability 3 Break capability, and she lacks methods to chase enemies. We have added a Slow effect to her Ability 3, and we have moved some of the DPS gains from Ability 3 hits to her Natural Passive.

Adjusted cooldown from 9 seconds to 10 seconds.

The width of the crescent moon increases. During the duration of the light chain, it will drag some distance towards Oitsuki at regular intervals.

Blessed be the earth, may we enjoy peace and security. Participate in battles and complete quests during the event to earn Safety Amulets, which can be redeemed for turret and minion skins, among other rewards! 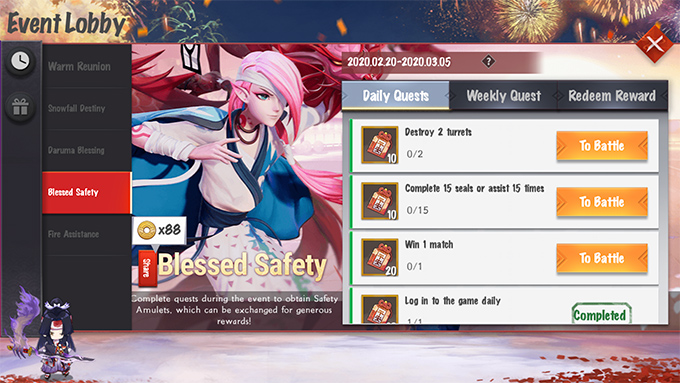 Log in to the game during the event to claim 3 Decoy Fire.

Decoy Fires can prevent one soul fire from being extinguished when onmyoji of Challenger tier or below take part in Ranked Match in a team. 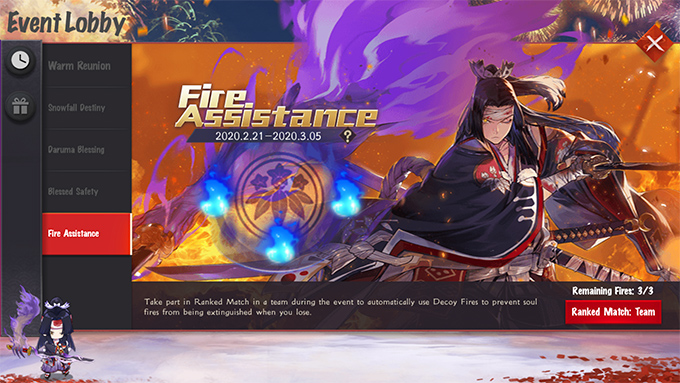