Onmyoji Arena will change the lineup of the limited-time free shikigami at 5:00 AM on February 8th, 2021. The new free shikigami will be Jikikaeru, Kusa, Ryomen, Mannendake, Oitsuki, Kani Hime, Mouba, and Yamakaze.

Onmyoji who own the God of Fortune Month Pact will have the additional free shikigami, Hannya and Hakuzosu.

Of these shikigami, Mouba and Yamakaze have difficulties of Hard and Extreme respectively. Onmyoji who have been in Heian-kyo for less than 7 days can’t use them in battle for free.

The core of Samurai X’s control is his Ability 2 during the laning phase. As this effect is triggered after taking damage, the laning experience is somewhat passive. We have redesigned his trait and Ability 3 and adjusted the effect trigger mechanic in hope that Samurai X will be able to more actively select when to initiate attacks.

Removed the effect of the next 3 basic attacks being enhanced after casting Ability 1.

Samurai X enters the Sturdy state, increasing his Armor and Movement Speed, and gaining immunity to Slow. The next 2 basic attacks deal additional physical damage (this damage is based on Samurai X’s Armor bonus).

Currently, Onikiri has to use his Ability 3 to trigger the Break effect of his enhanced basic attacks to deal maximum damage. We have changed the effect of his enhanced basic attacks to Slow, in hope that this will give Onikiri more freedom when chaining. Also, we have added a damage bonus based on Max HP to his Ability 2: Light Vanquisher to fix the issue of Onikiri’s jungling speed becoming slower after the previous jungle adjustments.

Even after the previous adjustment, Kusa still has relatively high overall healing capability. We will continue to adjust her healing to balance her strength.

Compared to other Supports, Ichimokuren and Kaguya currently have relatively low growth in values. We have added a Max HP bonus to some of their abilities in hope that this will strengthen their capabilities in the late game.

Itsumade has shown a much stronger performance after the item changes and adjustments to the jungle. We have adjusted the damage of her Ability 1 and Ability 2 to suitably weaken her burst capability.

Currently, it is quite difficult for Tamamonomae’s abilities to hit. We have adjusted his Ability 2 and ultimate ability in hope that this will increase error tolerance.

Takiyasha Hime’s Trait: Moon Slash requires her to hit enemy units as much as possible at maximum stacks of New Moon Blessing to recover HP. This makes it difficult to use the recovery effect when she is disadvantaged during the laning phase. We have adjusted her trait such that she now directly recovers HP for the duration of when she is at maximum stacks. She can extend this duration by dealing damage.

Passive Effect: When Takiyasha Hime hits enemy shikigami or large monsters with abilities or basic attacks, she will gain 1 stack of New Moon Blessing. At maximum of 5 stacks, she will recover HP and gain a 7.5% Attack Damage Bonus. At the same time, her Attack Range will be increased, and she will recover HP every second for 3 seconds. Dealing damage to enemy shikigami and large monsters will extend the duration of New Moon Blessing by 1 second.

Increased the Base Armor of Marksman shikigami by 6, and increased level growth of Armor by 0.75.

The previous item changes caused unfriendly survival conditions for Marksman shikigami, leading to them becoming very reliant on the item order of the Support position. We have suitably increased the base stats of Marksman shikigami, and reduced the Armor bonus of 8ft Magatama.

Adjusted Ability Power bonus from 100 to 90.

BLEACH comes to Heian-kyo! During the crossover event, players can purchase the Bleach characters Ichigo Kurosaki and his skin Soul Cutter, as well Rukia Kuchiki and her skin Unchanged Aspiration, at a maximum discount of 622 Jade!

Soulcaller Talismans can be used to draw crossover characters shards and other generous rewards! 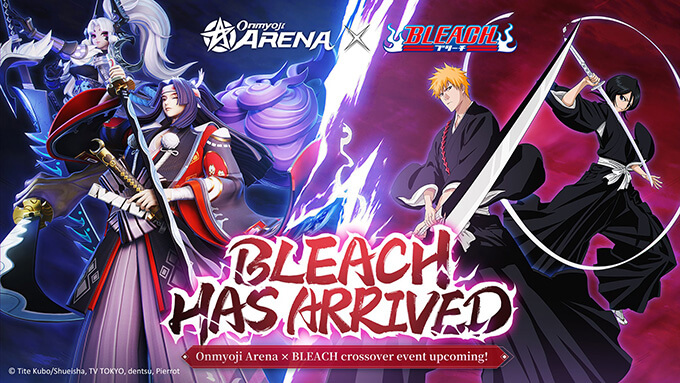 Lord Arakawa’s Shadow Dreams series skin, Illusion Seeker is now available with a 12% discount during the event. Don’t miss out!

Kaguya’s Shadow Dreams series skin, Moonlit World is now available with a 12% discount during the event. Don’t miss out!

Hana’s LNY Carnival series skin, Phoenix Song will make its return to the Skin Shop for a limited time! It will be available from February 11th to February 26th, 2021. Don’t miss out!

Yuki Onna’s Valentine’s Day series skin, Snowfall Destiny will make its return to the Skin Shop for a limited time! It will be available from February 14th to February 28th, 2021. Don’t miss out!

Momo’s Valentine’s Day series skin, Blossom Letter is now available from February 14th to February 28th, 2021 with a discount of 40%. Don’t miss out!

May you have both happiness and fortune, and may good luck come your way! During the event, players will enjoy Coin, Proficiency, and Bond Bonuses throughout the day. Log in to the game daily and stay online to claim Spring Packs! There will also be a Weekly Coin Bonus from February 5th to February 21st, 2021. 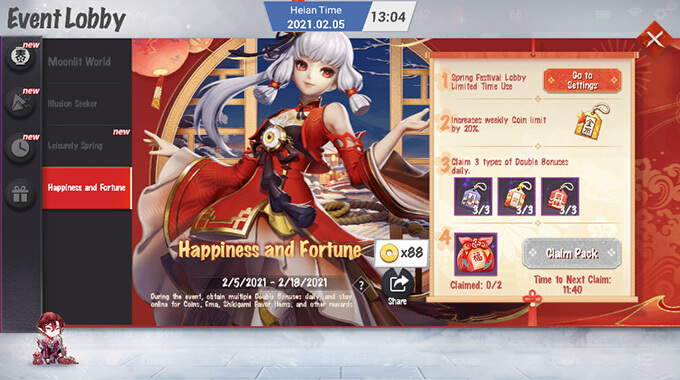 May you be prosperous! It’s time for Red Packets! During the event, players level 10 or higher will be able to claim Auspicious Red Packets when they log in to the game! Open them to get Jade, Wish Ema, Skin Tokens, Summon Amulets, and other rare rewards!

The shadow dream journey begins! On this journey, we will travel with five shikigami to collect 25 shadow play memories. Immerse yourself in the charm of culture as you experience shadow play.

Log in to the game during the event to claim a Confession Love Letter. Write a love confession and send it to your beloved.

You can now set a skin that you want as a Wish Tag, so that you and your friends know which skins everybody wants and can gift accordingly. 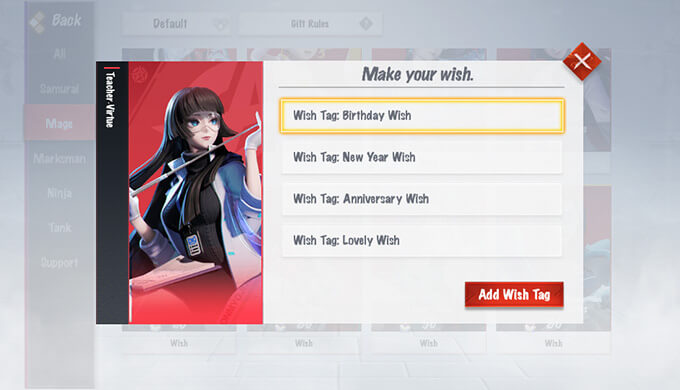 Optimized the display of drops of large monsters. It is now easier to locate dropped items.

The judgment mechanic of double monster kills has been changed from damage dealt to attack action.

Lanterns for the new year to usher in fortune! From February 5th after maintenance to 3/4, the default Lobby will be changed to the Spring Festival theme. You can change this in Lobby Settings.

The explosion effect range of Susabi’s Ability 1: Falling Star has been shrunk such that it better fits the damage hitbox.