Onmyoji Arena will change the lineup of the limited-time free shikigami at 5:00 AM on March 9th, 2020. The new free shikigami will be Komatsu, Ichimokuren, Hououga, Shishio, Inugami, Ootengu, Yasha, and Ittan-momen.

Of these shikigami, Yasha and Ittan-momen have a difficulty of Extreme. Onmyoji who have been in Heian-kyo for less than 7 days can’t use them in battle.

“Start learning from this game.”

Kisei is a cannon-type mage. As a brilliant chess master, he can freely control black and white chess pieces. Black stones primarily deal damage, while white stones primarily control enemies. In actual combat, Kisei fights like he’s playing a game. On the one hand, he must predict his enemies’ movements to place chess pieces, placing two black stones in a row to form a grid and continuously exploding them. On the other hand, he must enhance his chess pieces according to the battle’s situation; he can choose to enhance the black stones’ damage or the white stones’ control ability. Kisei’s Ultimate Ability can place a chessboard covering a great distance and provide support for laning or teamfights. Even when immobile, he can still form strategies for the entire battle. 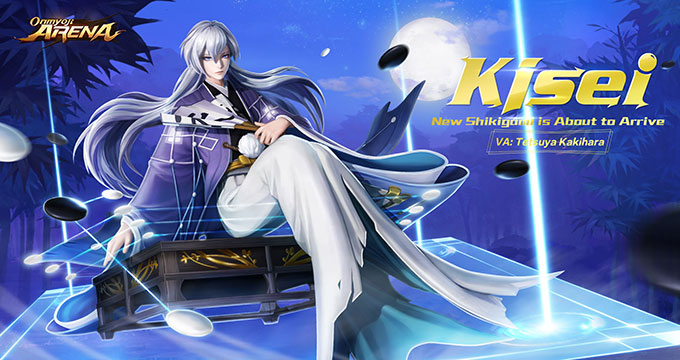 Passive effect: Every time Kisei seals an enemy, he will recover MP. Kisei also gains a higher angle of vision.

Kisei places a black stone in the designated position. If he places a second black stone in the square area surrounding it, then the two black stones will form a square grid that slows enemies within it, and the first black stone will disappear. The grid will explode after a short period of time, dealing magic damage to enemies in range.

Kisei gains a black stone at regular intervals, and he can hold up to 3 stones at a time. If the grid hits an enemy shikigami when it explodes, the recharge time for black stones will be shortened.

Kisei instantly gains an enhanced chess piece, which can be used within a certain period of time to enhance Black Stone’s Flight or White Piece No-Eyes one time.

Enhance White Piece No-Eyes: When the white stone explodes, it deals magic damage to enemies and inflicts them with a Stun effect.

Kisei places a white stone at the designated position that explodes after a short period of time, dealing magic damage to nearby enemies and inflicting them with a Slow effect.

Kisei unleashes a chessboard at the designated position, and places a black stone at its center. At the same time, he enters the control-immune but immobile Chess Master state. During this time, Kisei can still cast his other abilities on the chessboard. Of them, the black stone recharge time of Black Stone’s Flight will be significantly shortened.

Using this ability again will end the Chess Master state and put away the chessboard. It will also grant Kisei a shield and a Haste effect.

Kisei will first be available during this week’s Shikigami Brawl.

Yoto Hime is currently a bit weak regardless of whether she’s on the top lane or in the jungle. We have suitably increased the healing capability of her Ability 1 while also adding slaying damage to her Ultimate Ability in hopes of making her Ultimate Ability a greater threat to enemy shikigami.

We have fixed an issue that caused the transfer of coins from defeating enemy shikigami while equipped with support items to have no effect on passive stacks. At the same time, we have made suitable adjustments to Tesso’s ability damage so that he will rely less on his Attack Damage. We have also increased his Ultimate Ability’s damage’s attack effect coefficient so that Tesso is not too weak when facing front row shikigami.

Fixed an issue in which the transfer of coins from defeating enemy units with support items would not provide Incense Money.

Hiyoribou’s Ability 3 duration is rather long, making enemies often lose their target after a long period of time. We have decreased Ability 3’s duration and suitably increased the damage of Ability 2 as compensation.

Hakuro’s Ultimate Ability is primarily used to knock back nearby enemy shikigami. As a protective ability, its range is long, but there is little to be gained from hitting distant targets, and its cooldown is a bit long. We have decreased the cooldown, adjusted the ability’s overall damage ratio and made the Ultimate Ability deal more damage to low-HP targets.

Susabi’s Ultimate Ability needs a relatively long time to deal damage when he has many passive stacks but the stacks are not yet full. Additionally, when there are many shikigami in range, damage to designated targets is not stable due to the asteroids falling randomly. We have optimized the asteroids’ falling speed and the connection to passive stacks. Furthermore, damage to targets with the same priority will be weighted. We hope the optimizations will provide a better experience when using Susabi’s Ultimate Ability!

New: When there are multiple targets of the same priority within range, the asteroids will have a higher chance of attacking the unit with less remaining HP.

After the adjustments we made to Dodomeki’s passive previously, the output duration of her passive’s open eye state has now been extended in combat. This has made Dodomeki more stable to use, but the duration of her passive that can deal high damage is now too long, and there is an obvious increase in her damage output. We have reduced the damage of Dodomeki’s passive and HP regen effect of Ability 3 to control her strength.

Everybody dresses up to welcome the arrival of spring. Every day, Momo will prepare 3 Peach Blossom Dew quests. Complete battles to receive your Peach Blossom Dew, which can be used to claim Female Shikigami Discount Coupons and other rewards from Momo! In addition, sign in daily for a total of 10 days on the event screen to get the event exclusive avatar frame, Pretty in Peach, for free. Come join the fun!

The Fortune Shop returns for a limited time. Draw your exclusive discount!

During the event, if your recharge meets the requirements, you can get rewards including Mystery Vouchers, Evolution Amulets and rare avatar frames.

Onmyoji of Elite tier and above can now view information regarding the shikigami’s abilities after confirming their shikigami selection.