We will change the lineup of the limited-time free shikigami at 5:00 AM on October 19th, 2020. The new free shikigami will be Tesso, Ichimokuren, Hououga, Ryomen, Hakuzosu, Menreiki, Yasha, and Kisei.

Onmyoji who own the God of Fortune Month Pact will have the additional free shikigami, Hako Shoujo and Susabi.

Of these shikigami, Yasha and Kisei have a difficulty of Hard. Onmyoji who have been in Heian-kyo for less than 7 days can’t use them in battle for free.

Season 11 will start after the maintenance on October 16th, 2020. Please check the detailed info below:

Players whose highest tier in Season 10 reached Gold or above will get the avatar frame for the corresponding tier. The Grand Onmyoji frame will only be granted to players who are still in Grand Onmyoji tier at the end of Season 10.

After Season 11 starts, players who participated in at least 60 5v5 matches and had an average punishment (punished matches / total matches) of less than 0.025/match will be granted a Season 10 exclusive skin for Shishio, Art of War: Haze General. During Season 11, players who meet the requirements of claiming a rank skin can claim the Season 11 exclusive rank skin for Kubinashi, Virtue of War: Sunset Whip. When Season 12 starts, players who meet the requirements will be able to claim the Season 11 exclusive skin for Hannya, Art of War: Plundering Mask.

After Season 11 starts, the match data of Season 11 will be added to the Season Memento. 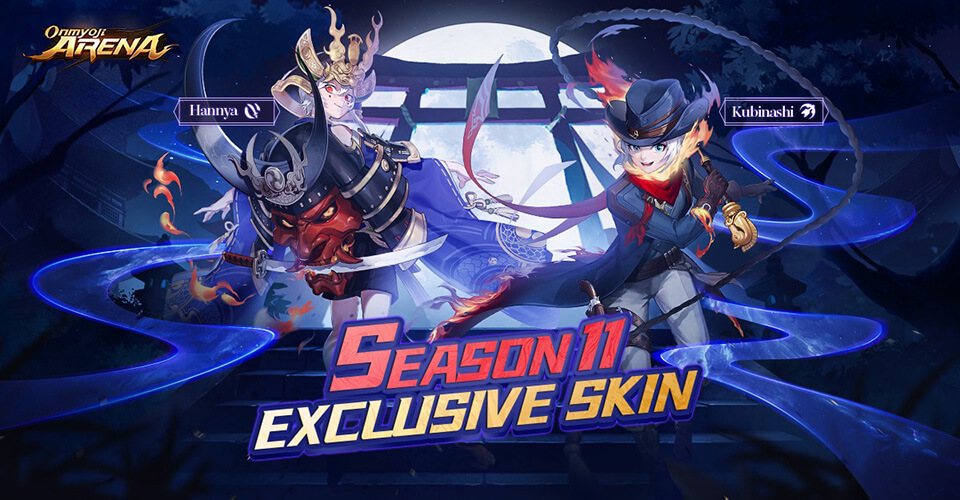 “The night awakens and the end draws near!”

Takiyasha Hime wields her long Lunar Blade, which means she has a wider attack range. Based on the characteristics of her long blade, we have set a mechanic in which there are better gains if enemies are hit with the outer circle of the blade of Ability 1: Whirlwind Moon. This, together with the horizontal slash of Ability 2 and the ranged mark of Ability 3, contribute to battle mechanics and tempo that fit her characteristics.

For her Ultimate Ability: Shadowless Sundown, we have set 4 different effects that can be selected, in the hope that this ability will provide more gameplay selection while keeping the original character setting. 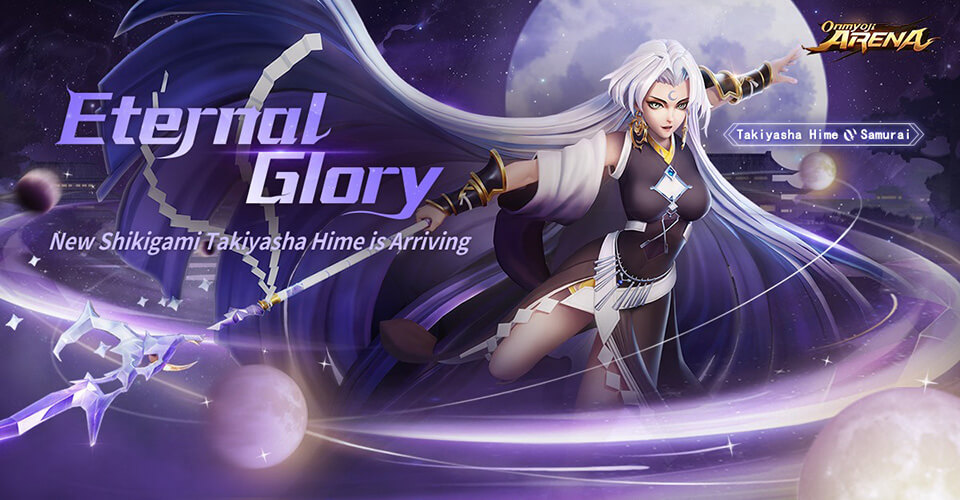 Passive Effect: When Takiyasha Hime hits enemy shikigami with abilities or basic attacks, she will gain 1 stack of New Moon Blessing. At a maximum of 5 stacks, the next 3 basic attacks will be enhanced, with increased Attack Speed and Attack Range. At the same time, she will recover HP after hitting enemies with her basic attack.

If an enemy shikigami is hit by the blade, Takiyasha Hime will additionally gain 1 stack of New Moon Blessing.

Takiyasha Hime charges in the designated direction, dealing physical damage to enemies in her path. At the end of the charge, she will perform a horizontal slash in the direction of the joystick which will knock up enemies, deal physical damage, and inflict a Slow effect.

Profound Moon may have the following 4 effects, which can be selected by dragging the ability icon. The effects last for 12 seconds.

Invade: Deals additional true damage when enemies are hit with Shadowless Sundown. Her Attack Damage is increased for the duration.

Cascade: Dispels control effects on herself when Shadowless Sundown is used. Her Cooldown Reduction and Cooldown Limit is increased for the duration.

Tempest: Immobilizes enemies for when they are hit with Shadowless Sundown. Her Movement Speed is increased for the duration.

Immovable: Adds a shield that can block damage to herself every time an enemy shikigami is hit by Shadowless Sun. Her Armor and Magic Resist is increased for the duration.

Takiyasha Hime will first be available during this week’s Shikigami Brawl.

To provide a better experience for higher-ranked players, and to solve some of the issues in Ranked Match, we will introduce a new competition system, Heian-kyo Showdown, which will replace the existing Onmyoji Moment. At the same time, we have adjusted the ranking mechanic in Ranked Match for Challenger tier and above, in hopes that this will provide a fairer and better competitive experience.

In addition, we will also introduce the Rank Points system, which will be based on match performance, in hopes that this will provide better real-time feedback for excellent performance in battle. This will also provide better motivation for players even if they are in an unfavorable match.

In Ranked Matches for Challenger tier and above, we will remove the win points calculation and division settings, but continue with the Soul Fire mechanic. Now, after attaining Challenger tier, players will be entered into a server-wide rankings, in which they will progress to the Superstar tier once they have obtained 51 soul fires.

Also, we have adjusted the group matching restrictions for this tier. You can now select to solo queue, duo queue, or triple queue according to your requirements.

Players who obtain the Challenger Medal for the current season and have a tier of no lower than Master will be able to participate in Heian-kyo Showdown.

In this mode, players can only solo queue, and their nickname will be hidden throughout the match. At the same time, we have also polished the original matching mechanic, and we hope this will improve the quality and experience of matches.

When participating in Heian-kyo Showdown, players will get a higher Way of Combat bonus, and when the results of the season are tallied, onmyoji on the rankings will obtain unique titles and avatar frames as a reward.

Previously in Ranked Match, the trigger conditions of Eligibility Approved and Blessing were not displayed. We will now change the hidden score to become the visible Rank Points.

After each match, players will be awarded Rank Points according to their performance in the match. When they obtain the designated amount of points, they will consume a certain amount of Rank Points to obtain Eligibility Approved or Blessing.

In addition, players who perform well in the majority of their matches and show higher skills than that expected of their current tier will obtain additional points and an Honor tag when results are tallied.

You can view the detailed rules of Rank Points in the Ranked Match – Rules – Rank Points screen.

We have added a new large monster, Sougenbi, to enrich the strategies available in the early game, and in hopes that this will increase the influence of top lane shikigami on the match in the early game.

Sougenbi will spawn in Orochi’s location before Orochi spawns. Seal Sougenbi for a random Attack, Defense, or Haste bonus, and HP Regen for the whole team will be increased for a certain period of time.

Also, the spawn time for Orochi will be adjusted from 480 seconds to 600 seconds.

To further enhance the laning experience, and to prevent certain shikigami from destroying the outer turrets on all three lanes too quickly, we have added the Turret Protection mechanic. We hope that this will prevent the laning phase from ending too early, and that shikigami who perform better in lanes will be awarded with sufficient gains.

To prevent the disadvantaged team from falling into an income disadvantage, and to provide a certain counter capability when sealing enemies from the team with the upper hand, we have slightly increased the amount of rewards, and adjusted the shikigami reward mechanic.

Currently, players are becoming fully equipped too early in the match, which means that the economic advantage of the team with the upper hand becomes negligible, and there is the issue of no further upgrades in the remaining time of the match. We have thus removed the setting in which the coin income from minion waves, monsters, and wage increase over time. To match with this adjustment, we have also slightly decreased the gains from turrets and Orochi minion waves.

As the tempo of the game will be changed greatly after these overall changes, it will be disadvantageous for players getting used to the new tempo of the game and will affect the player’s smooth transition to the next tier if we continue to maintain different map configurations for different tiers. Hence, after this update, we will unify and use the current map for tiers Elite or higher for all tiers.

We have adjusted the item effects of Shadow Fan and Sanzu River Lantern. We hope that this will make Shadow Fan more suitable for shikigami with multiple-stage magic damage, and that Sanzu River Lantern will become a common Magic Resist item, instead of being only suitable for shikigami who deal magic damage. At the same time, we have also adjusted the price-performance ratio for Night Parasol and Greater Devourer Ball.

Ogawa River (Redesign): After your abilities deal damage to the enemy, your damage to the target will be increased by 1.5%. This effect can stack 1 layer every 0.5 seconds, up to a maximum of 8 layers. This effect will disappear if the target doesn’t receive ability damage from you within a certain period of time.

We have made adjustments to the mechanic of Hone Onna’s ultimate ability in hopes that she will better use her stealth to initiate attacks instead of quickly refreshing Ability 1 to deal damage with her enhanced basic attacks.

Adjusted to: Defeating or assisting in defeating an enemy shikigami resets the cooldown of Hone Onna’s other abilities.

Under the current mechanic, the explosion of projectiles from Ability 2: Blowing Winds is unable to hit enemy units behind the target due to it being triggered too far in front. We have increased the coverage behind the target by balancing the flying speed of the projectile and delay distance. At the same time, we have added damage in path, in hopes that this ability will have a chance to be useful when laning and dealing damage.

Slightly increased the projectile flying speed and reduced the delay distance for the trigger judgment of the projectile to increase the coverage of the explosion behind the target.

Added damage in the projectile’s path, and canceled the 2-stage casting.

We have suitably increased Kuro Mujou’s base stats to increase the error tolerance when laning and during teamfights. 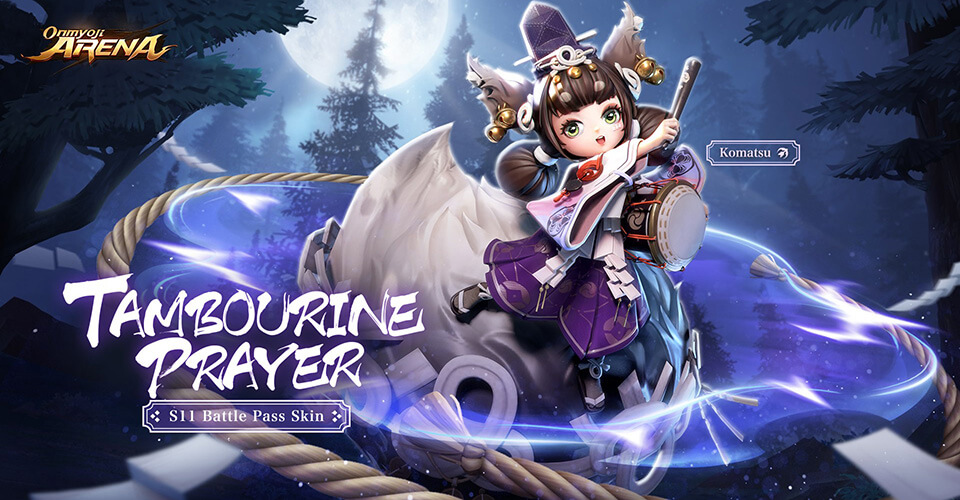 Also, The Mummy Ani Secret Box is now available in this season’s Battle Pass Shop. Open it to obtain Kyonshi Ani’s skin, Mummy Ani. The requirements must be met in order to use it. The skin obtained from this item will not have the season mark.

We have added an additional 400 Pass Coins as rewards in this season’s Battle Pass from Levels 1-100. We hope that this will provide players with a better gaming experience.

A new Recruitment Channel has been added to Chat Channel, where you can quickly enter rooms corresponding to your requirements. Players can also send recruitment requests to the channel from inside rooms to find suitable teammates more quickly.

Added the Lobby Decoration feature to the Lobby interface, and combined Lobby Shikigami and Lobby Visitor under My Lobby. Now, it is more convenient to set the shikigami, visitor and Sakurako displayed in the Lobby.

In addition, we have also added the feature to change and set different Lobby Scenes. Lobby: Spring Sakura will be permanently available, and the Autumn scene, Lobby: Autumn Sunset, will be available for a limited time.

Optimized the combining logic for the same type of damage and the display logic of multiple prompts within a short time.

Fixed an issue in which there was an error when displaying the direction of the hit effect of Kuro Mujou’s default skin.

Fixed an issue in which Shiranui’s Ability 3: Midnight Flutter lagged while flying.

Optimized the display effect of the Team Room screen.