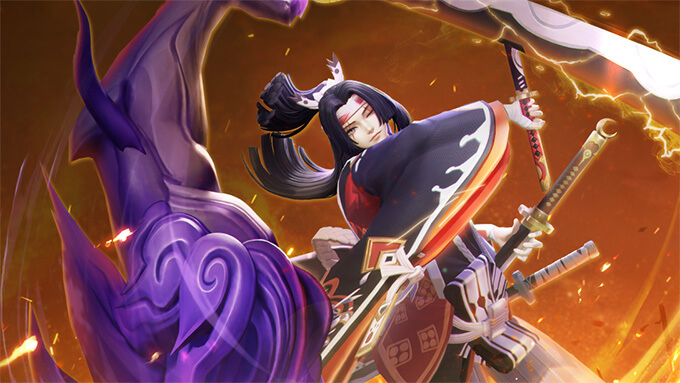 Season 8 will start after the maintenance on January 10th, 2020. Please check the detailed info below:

Players whose highest tier in Season 7 reached Gold or above will get the avatar frame for the corresponding tier. But the Onmyoji frame will only be granted to players who are still in Onmyoji tier at the end of Season 7.

After Season 8 Starts, the match data of Season 7 will be added to the Season Momento.

Onmyoji Arena will change the lineup of the limited-time free shikigami at 5:00 AM on 1/13. The new free shikigami will be Komatsu, Ichimokuren, Hououga, Yoto Hime, Shiro Mujou, Tanuki, Satori, and Puppeteer.

Of these shikigami, Satori and Puppeteer have a difficulty of Extreme. Onmyoji who have been in Heian-kyo for less than 7 days can’t use them for free in battle.

“I am the sword that will destroy all the demons in the world!”

He is the most powerful demon-killing weapon of the Minamoto clan, and once treated Minamoto no Yorimitsu as his lifetime conviction. However, the pact in his left eye hides a secret…

Onikiri has a high DPS capability, and can use the flexibility from Blade Flash to move close and deal damage. Also, Onikiri’s 3 blades can provide different buffs to his basic attacks. Use Onikiri’s ultimate ability, Elegant Sword, when either he or the enemy has low HP to deal heavy true damage.

Onikiri has a high DPS capability, and can use the flexibility from Blade Flash to move close and deal damage. Also, Onikiri’s 3 blades can provide different buffs to his basic attacks. Use Onikiri’s ultimate ability, Elegant Sword, when either he or the enemy has low HP to deal heavy true damage.

Passive effect: When Onikiri uses Soul Slash, Light Vanquisher and Blade Flash, the next basic attack within 8 seconds will use 1 of 3 blades to attack, each with a corresponding bonus effect, and slightly increases his attack range and Attack Speed.

Blade Flash: Onikiri pulls out Higekiri and attacks. The basic attack will inflict a Break on the target.

Onikiri slashes once horizontally in the designated direction, dealing physical damage to enemies hit. At the same time, he transforms into a blade spirit for 1.5 seconds, during which he cannot be selected and he cannot move. Casting the ability again will cancel this state early.

If Onikiri uses this ability when under control, he will immediately turn into a blade spirit.

Onikiri slashes three blade gleams in the designated direction, dealing physical damage and a temporary Knockup on enemies hit, also inflicting a Slow on them. If the three blade gleams hit the same target, latter damage will be decreased.

Onikiri dashes towards the designated direction and deals physical damage to enemies on the way.

If the ability is used again, Onikiri will quickly slash once, dealing physical damage to surrounding enemies and granting himself a Haste effect.

Onikiri rushes through the designated enemy shikigami, granting himself a Movement Speed increase, and dealing a Stun plus three slashes to the target. The first two slashes deal some physical damage, and the third slash deals a lot of physical damage.

If either the target or Onikiri has less than 50% remaining HP at this time, physical damage will be converted to true damage.

Onikiri will first be available during this week’s Shikigami Brawl.

Chaos Realm is a new mode based on 5v5 battle that is available for limited time. In this mode, players can combine shikigami and abilities as they like, to try out the different gameplay possibilities.

In this mode, an ability selection process has been added. Players can freely select abilities that they want for the shikigami that they have chosen. There will be a fixed shikigami selection pool, and players do not have to own the corresponding shikigami to use them. There are abilities from 25 shikigami available in the current version.

There are more ways to play and more fun to be had awaiting players to explore!

The yin and yang are unbalanced and the days are without light. Time and space are distorted and everything has changed dramatically. Onmyoji, are you ready to enter this intriguing wonderland?

You can complete quests in the Battle Pass to get EXP for upgrading Battle Pass and claiming corresponding rewards!

For this season’s Battle Pass, we have adjusted the type and quantity of weekly quests, and added the Recommended Progress feature. We hope that this will make it easier for players to plan their leveling up for the Battle Pass.

Shikigami of difficulty Hard and Extreme cannot be used in Ranked Matches for tiers Elite or higher if their Proficiency has not reached Practitioner.

Chinese New Year is almost upon us. There will be a festive change to the Heian-kyo Lobby to observe this festival. The maps of 5v5 matches will also be decorated accordingly.

Optimized the random shikigami selection logic when no operation is carried out during the Selection stage. Now, a suitable selection will be made according to the laning distribution situation of the team.

Removed the setting for the opening cutscene to automatically play from the Settings screen.