Overlords of Darkness and Light

Dark Slayer, Infinite Slayer, and Dark Lord Slayer are summoned 2, 8, and 15 minutes into the game. 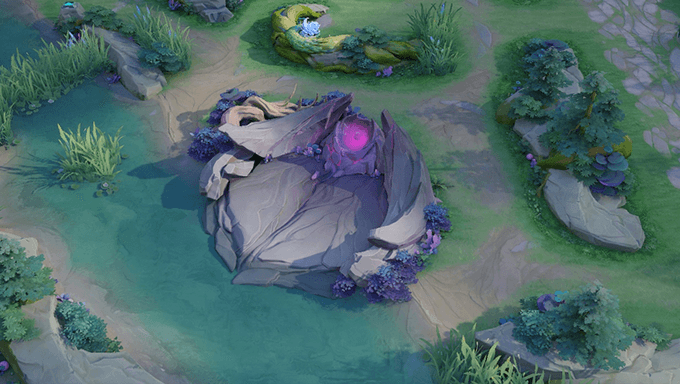 After defeating Dark Slayer, your team gains the Dark Slayer’s Wrath I buff, increasing damage to Defense Towers for 90 seconds.

After defeating Infinite Slayer, the slayer is able to summon Infinite Slayer as a lane pusher; and your team gains the Dark Slayer’s Wrath II buff, increasing Physical and Magic Defense and recovering HP every second for 90 seconds.

After defeating Dark Lord Slayer, the middle lane pusher of the next wave will be replaced by Infinite Slayer; and your team gains the Dark Slayer’s Wrath III buff, increasing Physical and Magic Defense and recovering HP every second for 90 seconds.

Abyssal Dragon and Holy Dragon are summoned 2 and 8 minutes into the game. 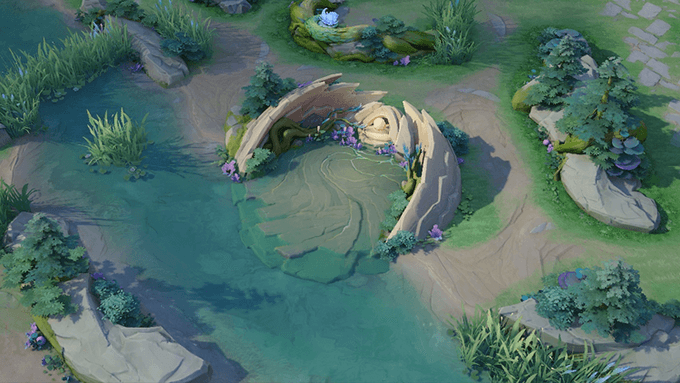 After defeating Holy Dragon, your team gains the Holy Light Strike buff, gaining +30% Normal Attack and Magic Damage to creeps and jungle creeps and bonus Magic Damage equivalent to 3% of the target’s Max HP (+1% for every additional 200 AD or 400 MP; cooldown: 3 seconds) for 90 seconds.

“We felt that Drake was too much like a giant baby that needed babysitting in the previous versions. And there were many obscure mechanics, which players needed to invest a lot of time to learn. In Battlefield 4.0, we will introduce all-new lane pushers to change current gameplay. Prepare to bear the wrath of the Dark Slayer!”

We greatly modified the behavioral logic of lane pushers, making them a more prominent factor in the outcome of the game.

(New) Lane pushers will now cast a powerful ability when there are 3 or more enemy units nearby.

We’ve removed some of the hidden mechanics of lane pushers to reduce the time needed to strategize.

“We attempted to return Bone Dragon to its original purpose as an option for defeating Dark Slayer rather than a tool for snowballing in the Jungle. We hope that with the latest adjustment, Spirit Sentinel will become a more useful option in the Slayer Lane.”

After the adjustment, Bone Dragon will be moved from its original location (opposite Dark Layer) to a new location in Slayer Lane. Its stats, kill effects, and allocation rules will also be adjusted

(New) Bone Dragon releases a wave of energy after being defeated. All nearby units gain HP Regen and Gold Bonus after 1.5 seconds.

“Currently, Horizon Valley lacks lane distinction. In this update, we take a giant stride forward. We’ve adjusted the locations of Bushes and Defense Towers to make each lane more distinct and elevate the importance of hero class in the different lanes, particularly early in the game.”

We’ve balanced the symmetry of the map. The distance from the outer tower to the edge of the Jungle is the same for both camps.

Slayer Lane emphasizes combat. We’ve shortened the distance from the Defense Towers to the edge of the Jungle.

“We’ve made dramatic changes to the aesthetics of Horizon Valley.” 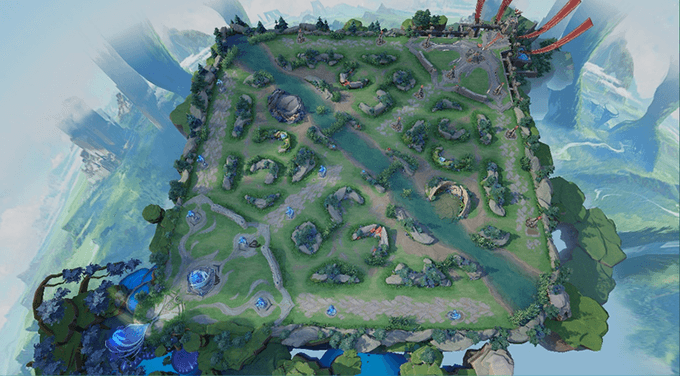 “Hi, Challengers. It’s been a while! After a hiatus, we are launching all-new season gameplay. This time, we hope to improve late-game experiences through the changing environment. Nightfall is when the real battle begins!”

Dark Lord Slayer descends on the battlefield 15 minutes into the game, bringing with it a perpetual night. Lanes become exponentially more challenging at night, but affords greater growth.

“In high-end battles, Junglers often farm lane creeps, often resulting in Junglers becoming over-leveled and causing disagreement with other team members in the lane. We believe that Junglers should primarily benefit from the Jungle. Therefore, we’ve made some adjustments to restrict early-game lane farming.”

Jungle weapons at all levels:

(New) Modest: When near an allied hero, that hero gains full gold and EXP from killing the creeps and jungle creeps, while you only get 50%. This effect is removed after 5 minutes. (When there are multiple effects, the effect with the lowest Gold applies.)

(New) Lagging heroes gain additional rewards when defeating other heroes. The amount of the reward depends on how much the hero is lagging.

“Megastar Athanor is bringing her wonderful voice to Horizon Valley! Listen to Aya’s hit single and charge onward knowing that she’ll protect you!” 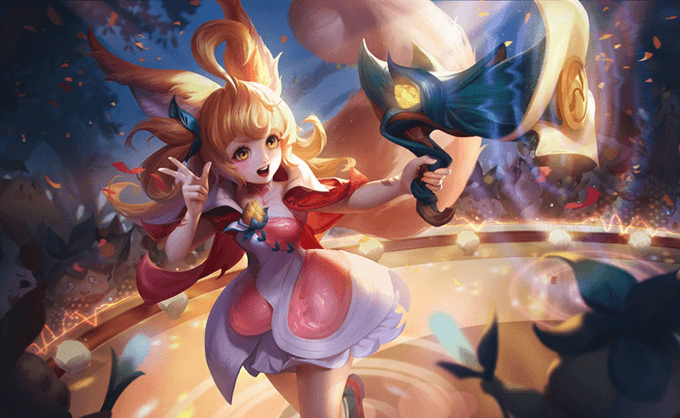 When Aya’s HP drops below 40%, she turns into a squirrel for 3 seconds: Can’t be selected and can’t attack enemies.

Aya flies toward a teammate, possesses the target, and places a shield on the target.

She cannot be targeted during possession. Tap the skill to place a shield on a teammate.

After a brief moment, Aya transfigures nearby enemies.

Transfigured targets receive Movement Speed reduction, and they are unable to use normal attacks and skills. 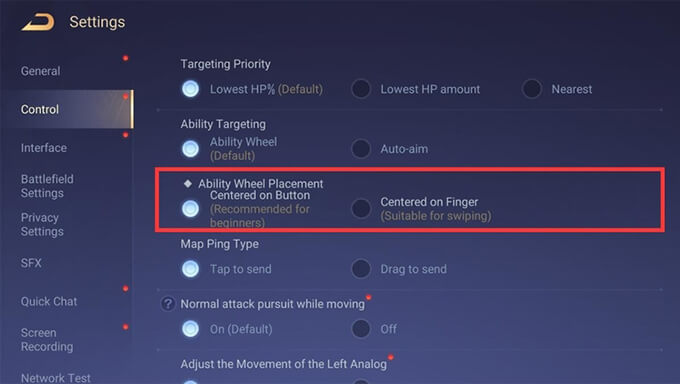 Refined the “Center on Finger” setting for the Skill Wheel. It will now be more intuitive than the “Centered on Button” setting.

The default setting for Skill Wheel Placement is now “Centered on Finger.” 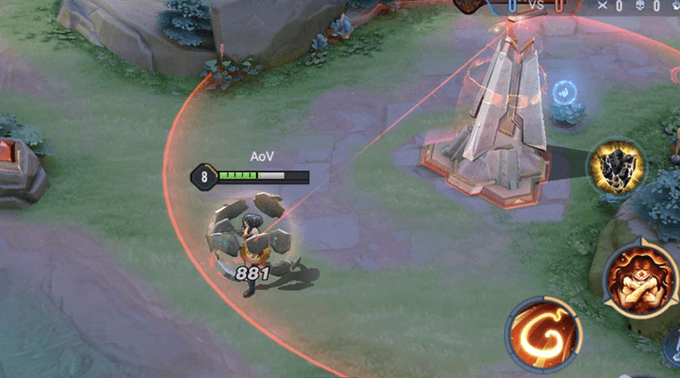 Feedback is relatively weak when a target with a substantial shield receives damage. Therefore, we added a grey value to represent shield damage. This will help the Attacker confirm whether attacks have landed or missed.

We’re excited to announce UI4.0. The overall design of UI4.0 is based on its predecessor as we continue to simplify various interfaces. Simplicity, fluidity, and friendliness are the main goals of this update. We hope that UI4.0 will provide players with a better AOV experience!

We adopted a more concise design language with a brighter and clearer UI while reducing irrelevant decorative elements to highlight relevant information and avoid confusion. To improve the user experience, we added vivid and dynamic responses to user input while ensuring transitions remain smooth.

To improve peripheral systems and enhance the player’s sense of immersion, we used a lightweight design to prevent distracting the player. At the same time, we have adopted a 1-shot animation form for transitions to make the world more immersive and improve the interactive path. We’re striving to provide a better peripheral experience.

In the BAN stage, all qualifying players may BAN simultaneously for 30 seconds. BAN heroes may not overlap.

In the PICK stage, selection time for each round has been increased from 20 seconds to 25 seconds.

In BP mode, players can select their preferred lane on the map before entering the BAN stage. This stage is aimed to enhance communication. Players cannot be reported at this stage.

The in-game Like system has become very popular since its release. It also produces a lot of valuable feedback. To improve in-game experiences and minimize the interference of battlefield messages, we’ve decided to optimize the Like system.

We reduced the triggering frequency of the Like feature. The feature will no longer be triggered when destroying defense towers or casting ultimates.

We adjusted the display locations of Likes and Kills. They no longer partially overlap.

We hope to provide players with more Brave Points and make the stakes in ranked matches a little bit lower.

Ranked matches are important events for players to test and refine their skills. Currently, progressing from Conqueror to Grand Conqueror is extremely arduous, which is holding players back. Therefore, we’ve added Grand Conqueror as a new tier.

Now, players that gain 50 stars in Conqueror will be promoted to Grand Conqueror and receive an all-new tier emblem.

We’ve added Grand Conqueror rewards in Season Challenge. Players will receive a permanent frame when they reach this tier.

When switching to a new season, players that reach Grand Conqueror will receive more carry-over rewards than the Conqueror tier.

When a player reaches Supreme Conqueror (top 50 in the server), the player’s server ranking will be displayed above the tier emblem. The ranking is updated daily.

Originally, when sending special Relationship items, players must activate the Inform All option in order to see the cool speaker and item effects.

To protect user privacy, players can now see the special effects without telling everyone that they’ve sent a gift.

Players can now send any number of Relationship items and see the speaker and item effects without having to tell everyone that they’ve sent a gift.

It has been a while since the last hero story update. A large portion of the hero files and stories remain locked, hampering our ability to tell the story of Athanor.

We’ve updated the Hero Story system along with the Athanor map. We’ll begin to slowly and consistently unlock hero stories so that you may learn more about the heroes of Athanor.

The profile tab of all heroes (except for some heroes that require iteration) will be fully unlocked. Related limitations have been lifted, and it will be the homepage of the story system by default.

The 1-min cooldown penalty for answering hero questions incorrectly has been lifted.

Sorted and iterated all the information in the hero profiles and sorted out all existing hero relationships.

The files are not yet finalized. We’ll continue to optimize the content in the Hero File tab to create a more robust system (estimated to be completed in November).

Optimized the functions and presentation of the Hero Story system and the Athanor map.

Iterated in-game voice-overs to make them more consistent with the lore.

When queuing for 5v5, the lobby will now be split into two tiers.

For example, rooms created by Diamond players will only be accessible by players between Gold and Master.

Master 100 Stars or higher is deemed a major tier, same as before.

Aoi remained OP in high-end matches (particularly in Slayer Lane). In this update, Aoi’s damage vectors have been nerfed, and the damage structure of her Ultimate has been revised. These changes weaken her early-game finishing and snowballing skill.

Fixed a bug that caused a long following distance when the target moves after enhancing normal attack.

Currently, Ilumia’s crowd control ability is OP. We adjusted the cooldown of Divine Light to give other players more time to maneuver.

The Knock Back effect is now affected by Resistance.

In this update, we reduced the damage and slowdown duration of Dark Pulse.

Tachi was originally envisioned as a valiant warrior. He turned out to be a pot-bellied sumo. We decided to optimize his damage structure to make balanced item build an option.

We are aware of the imbalance and confusion in Abyssal Clash. So we made a series of preliminary adjustments to improve the gaming experience and encourage player involvement.

Players are now able to choose heroes passed on by their teammates if they own them.

Picking up a healing pack will also heal 50% of nearby teammates’ HP and Energy.

Healing Packs cannot be picked up when HP and Energy/Mana are full.

The default Challenger Talent of all heroes is now Heal. Players can change this manually.

Fixed an error in the description of Dextra’s passive skill “Steals target’s Attack Power”. The actual effect is “+2% per stack”

Fixed a bug that prevented the control abilities of Iggy, Ata, Y’bneth, Keera, and Dark Slayer to break Laville’s skill 2

Fixed a bug that caused the special effects of Lumburr’s ultimate, Marja’s skill 1, Y’bneth’s ultimate, and other hero skills to disappear when these skills are cast at the edge of the view

Optimized the skill descriptions for Batman, Baldum, D’Arcy, Tachi, and other heroes by changing the color of HP-related descriptions to green