Onmyoji Arena will change the lineup of the limited-time free shikigami at 5:00 AM on April 13th, 2020. The new free shikigami will be Miketsu, Kaguya, Kuro, Ibaraki Doji, Aoandon, Yamawaro, Mouba and Kosodenote.

Of these shikigami, Mouba and Kosodenote have a difficulty of Extreme. Onmyoji who have been in Heian-kyo for less than 7 days can’t use them in battle.

Season 9 will start after the maintenance on 4/10. Please check the detailed info below:

Players whose highest tier in Season 8 reached Gold or above will get the avatar frame for the corresponding tier. But the Onmyoji frame will only be granted to players who are still in Onmyoji tier at the end of Season 8.

After Season 9 starts, players who participated in at least 60 5v5 matches and had an average punishment (punished matches / total matches) of less than 0.025/match in Season 8 will be granted a Season 8 exclusive skin for Kamaitachi, Art of War: Mighty Sickle III. During Season 9, players who meet the requirements of claiming a rank skin can claim the Season 9 exclusive rank skin for Yumekui, Steely River. When Season 9 starts, players who meet the requirements will be able to claim the Season 9 exclusive skin for Kanko, Black Flaming Past.

After Season 9 Starts, the match data of Season 8 will be added to the Season Momento. 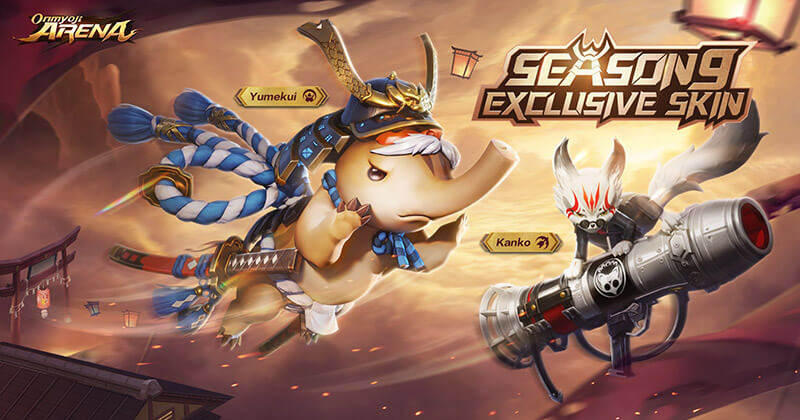 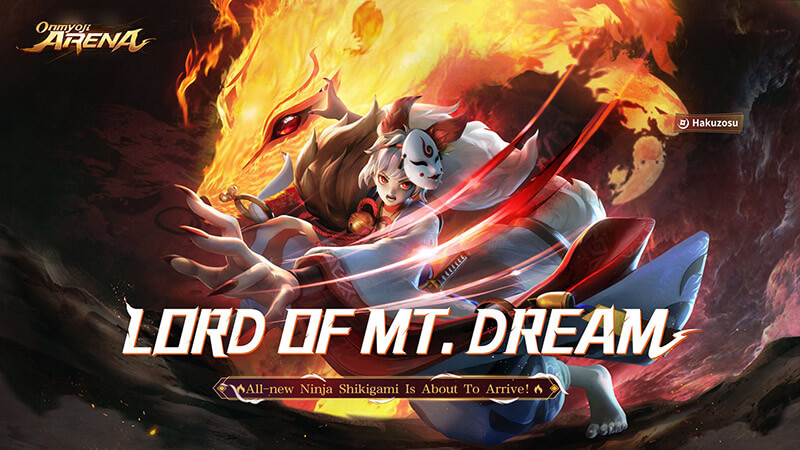 Passive effect: Hakuzosu becomes invisible for 2 seconds after hiding in the brush. Leaving the brush or using abilities will remove the invisibility effect. If Hakuzosu moves or strikes a target with a Burning Shadow mark within the brush, he will gain a Haste effect.

Hakuzosu can sense the position and tracks of enemy shikigami with Burning Shadow marks.

After energizing, Hakuzosu unleashes red flames in the designated direction, dealing magic damage to enemies hit and inflicting enemy shikigami and monsters with Burning Shadow marks. The longer he energizes, the greater the cast range and damage dealt will be.

If no enemy shikigami or monsters are in Hakuzosu’s field of vision, this ability will energize faster.

Hakuzosu deals magic damage to enemies in the designated area and slows them while also inflicting hit enemy shikigami and monsters with Burning Shadow marks.

Active effect: Hakuzosu consumes all of his current Dream Fire and for 2 seconds, continuously recovers HP. The amount of HP recovered is correlated to the amount of Dream Fire consumed.

Active effect: Hakuzosu transforms into a white fox and leaps to the designated position, dealing magic damage to nearby enemies.

Hakuzosu rushes in the designated direction, dealing magic damage to enemies in his path. When he lands, he will simultaneously strike the closest enemy shikigami in range, dealing extra magic damage. Hakuzosu will prioritize striking enemy shikigami with Burning Shadow marks.

Active effect: Hakuzosu deals magic damage to the designated enemy and slows them. Each Bite stack will increase this ability’s damage.

Passive trigger: While in white fox form, Hakuzosu will inflict a Bite effect when dealing damage to enemies. Each stack of Bite continuously deals magic damage. The mark can be stacked up to 3 layers.

Active effect: Hakuzosu consumes all of his current Dream Fire and gains a shield. The shield amount is correlated to the amount of Dream Fire consumed.

Passive trigger: While in white fox form, damage dealt by Hakuzosu is converted into Dream Fire.

Active effect: Hakuzosu rushes in the designated direction, dealing magic damage to the first enemy along his path while also changing back into human form and jumping backward. If no there are no enemies in his path, then he will transform into human form at the end point of the rush. This ability ignores reduced cooldown effects from items.

Hakuzosu will first be available during this week’s Shikigami Brawl.

We have always paid close attention to everyone’s laning phase experience. We hope that by making a few adjustments, the laning phase will become more interactive. In Season 8, we noticed that some choices onmyoji made would grant them a certain level advantage, but this type of choice lacks fun for both sides. On the other hand, players who did not make such choices had little room for countering. For example, Support shikigami could use Subdue to help Marksman shikigami get the buff and start lane suppression, or shikigami on the team with the laning advantage would raise their levels too fast, resulting in situations such as Lv. 3 shikigami laning against Lv. 1 shikigami. We hope that by implementing these adjustments, we can improve the laning phase experience for both sides.

We have also made suitable adjustments to address two currently prominent issues in the mid game:

The level difference between Support shikigami and other positions were rather wide, leaving little room for mistake for Support shikigami in the mid game and causing them to have little presence in teamfights. We have adjusted the EXP compensation rules for shikigami who have fallen behind in hopes of improving the in-game experience for Support positions.

We have made adjustments regarding the problem of Orochi having too much of an impact on the battle in the mid game. During the mid game, the side that defeats Orochi will often have too large of an advantage, leaving both sides with no choice but to surround Orochi and fight over it in the mid game. Additionally, the price paid by the team that loses the fight against Orochi is a bit too big.

Optimized the EXP compensation mechanic. When the average difference in levels across all players is too large, lower-level shikigami will earn extra EXP from killing minions.

Adjusted cooldown from 9 seconds to 6 seconds.

Shatter: Adjusted maximum damage to non-shikigami from 90 to 120.

Remade Effect: Every 8 seconds, the next attack deals an additional 50% physical damage and inflicts a 1.5-second 70% Slow effect on the target that weakens over time. Attacking or casting abilities will decrease the cooldown by 1 second.

Adjusted attack damage from 40 to 20.

In the current version, Support shikigami can use Subdue to help their side’s Marksman shikigami fight for the opening Kirin buff, causing much of the game’s resources being used for Marksmen and weakening the other four teammates’ functionality and positioning. At the same time, Kirin buffs lack distinguishability; to many players, they are only used for MP Regen, and the buff effects from Kirin for different stats are easily overlooked.

Additionally, the randomized Kirin refresh mechanic gives early-game Marksmen a more comfortable laning environment and effectiveness after getting the Kirin buff. Because of issues such as jungling efficiency, junglers are also more willing to give up the bottom lane Kirin.

Thus, we made rather large adjustments to the Kirin refresh rules and bonus effects. We hope this will give early-game jungle resources back to jungler shikigami.

Below are the specific adjustments:

Water Kirin buff has been changed to: +10% Cooldown Reduction.

Wind Kirin buff has been changed to: +25 Movement Speed.

[General Effect] Water Wheel – Unique: Damage to monsters is increased by 10%, and MP is restored every time damage is dealt to monsters.

Fire Kirin buff has been changed to: Ability Damage to targets will burn the target, dealing damage equal to 15% of this ability’s damage and reducing Armor and Magic Resist for 2 seconds.

Lightning Kirin buff has been changed to: Every 6 seconds, attacking the same target 4 times in a row with basic attacks can inflict Stun and deal magic damage.

[General Effect] Flaming Thunder – Unique: Damage to monsters is increased by 10%, and MP is restored every second.

Insurance Policy Strengthened (Ultimate Ability): The coins exist constantly. When all the coins are released or when there have been no changes to the coins for some time, they will automatically charge.

You can complete quests in the Battle Pass to get EXP for upgrading Battle Pass and claiming corresponding rewards!

The Inferno Walker Secret Box has been added to this season’s Battle Pass Shop. The requirements must be met in order to use it. Open it to obtain Samurai X’s skin, Inferno Walker (the skin obtained from this item will not have the season mark). 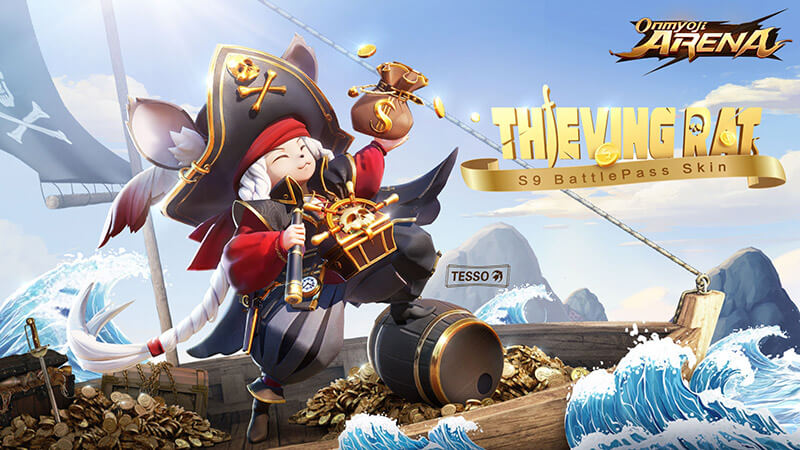 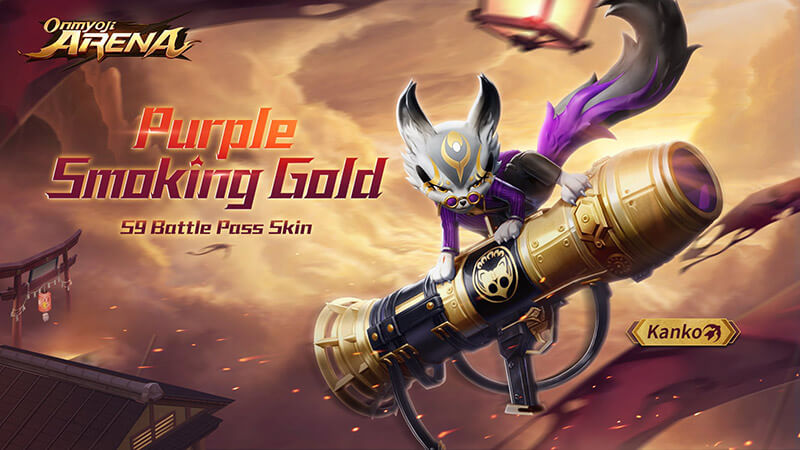 We have optimized the experience and handling of Kisei in battle.

Before Kisei uses Ability 1: Black Stone’s Flight to form a square grid with the placed chess pieces, it is impossible to accurately judge the range of the grid that will be formed. Thus, we have added a dynamic casting indicator to Ability 1. Additionally, we have made some prompt effects visible only to the player using them in order to keep the battlefield clear.

When Kisei is using Ultimate Ability: Masterful Move, his own HP and relevant statuses will not be visible, so we have added a PiP HP display and on-screen damage prompt. We have also added continuous, dynamic prompts for the corresponding chess board range onto the Mini Map.

We have added a dynamic casting indicator to Ability 1: Black Stone’s Flight to help players understand the range of the square grid that will be formed before they place a stone. At the same time, some prompt effects have been changed so that they are only visible to the player.

Continuous, dynamic prompts for the corresponding chess board range have been added onto the Mini Map when casting Ultimate Ability: Masterful Move, as well as an HP display in the PiP. We have also added on-screen effects that will show when damage is taken, so that onmyoji can know the state of their HP while focusing on chess.

Optimized the display and interaction logic of the game’s voice messages. Now, everyone can more easily know their teammates’ voice message status, and it will be more convenient to switch to the voice message channel.