Onmyoji Arena May 22nd 2020 Update sees new shikigami Suzuka Gozen will be available in most of modes except rank mode for free. 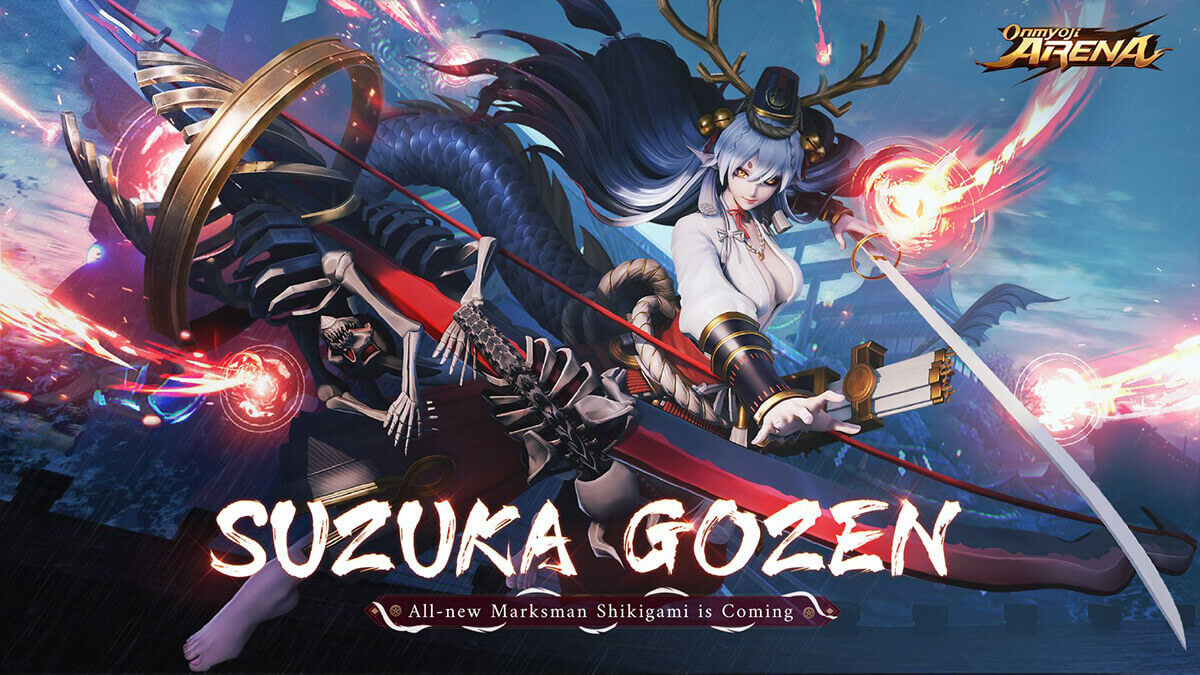 Onmyoji Arena will change the lineup of the limited-time free shikigami at 5:00 AM on 5/25. The new free shikigami will be Chin, Hiyoribou, Vampira, Yuki, Shiro Mujou, Ryomen, Kamaitachi, and Maestro.

Of these shikigami, Kamaitachi and Maestro have a difficulty of Extreme. Onmyoji who have been in Heian-kyo for less than 7 days can’t use them in battle for free.

Suzuka Gozen is the creator of the Suzuka Mountains, she was once a descendant of the mermaids who ruled the sea. With her black Shadow Bow in hand, she can cast different types of abilities and enhance her basic attacks to deal strong penetration damage. At the same time, Suzuka Gozen can also disarm enemies, which will give her the upper hand in battle if used well.

Passive effect: After Suzuka Gozen uses an ability, the cooldown of her basic attack will be reset. At the same time, her next basic attack unleashes a Pursuit Shadow, has increased range and can penetrate through the target, dealing physical damage to the enemy hit. For each target hit, subsequent damage will decrease.

Suzuka Gozen slashes her Shadow Bow in the designated direction, leaving an unworldly gully on the ground and releasing a blade of light that moves forward. The blade of light stops when it hits an enemy shikigami or when it reaches its maximum distance, dealing physical damage to the target.

The unworldly gully lasts for 2.5 seconds, and inflicts Slow on enemies who go through it.

Suzuka Gozen charges in the designated direction. If she hits an enemy shikigami or monster, she will slightly knock back the enemy, dealing physical damage and disarming them. At the same time, she leaps backward and her Attack Speed is increased.

Suzuka Gozen activates a defensive circle, during which she is immune 3 times to damage greater than a certain amount from enemy shikigami further than 575 yards away. Her Movement Speed is also increased.

Passive trigger: If a Pursuit Shadow hits an enemy shikigami, the damage dealt by her basic attacks will increase temporarily.

Suzuka Gozen will be available in most of modes except rank mode for free during this week.

Ibaraki Doji became much stronger when laning after the adjustments. We have suitably readjusted the percentage of damage converted to healing of his Ability 3 to limit his combat strength and laning survivability.

Kaguya can more actively restrict enemy shikigami when laning after the adjustments, and can also support ally shikigami while dealing damage. She has become evidently stronger. We have suitably readjusted the reduction of Armor and Magic Resist of her Ability 2 and Slow duration of her Ability 1 to balance out her strength.

Kisei has strong suppression capability toward enemy shikigami and after landing his first Ability 1, it is likely that he will cast Ability 1 again. We have reduced the range of Kisei’s Ability 1 and suitably reduced the shortening of the recharge time after hitting enemy shikigami in hope that it will reduce Kisei’s suppression capability in the early game and give him a certain duration of output cooldown.

Adjusted shortening of recharge time after hitting shikigami from 2 seconds to 1.25 seconds.

Added the Shikigami Counter Tips feature. When sealed, tips to counter the enemy shikigami will be given. This feature is available for Casual Match and Ranked Match of Diamond tier or below. You can turn this feature on and off in the Interface Settings.