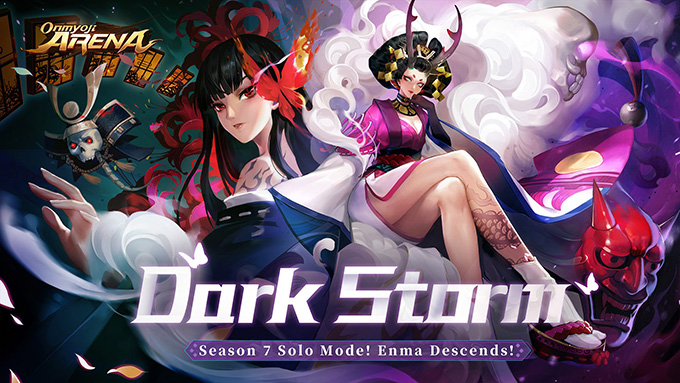 Onmyoji Arena will change the lineup of the limited-time free shikigami on October 21st, 2019. The new free shikigami will be Ebisu, Kuro, Jorogumo, Hana, Dodomeki, Tanuki, Komatsu, Maestro and Higanbana.

Of these shikigami, Komatsu, Maestro and Higanbana have a difficulty of Extreme. Onmyoji who have been in Heian-kyo for less than 7 days can’t use them in battle.

Season 7 will start after the maintenance on October 18, 2019. Please check the detailed info below:

Players whose highest tier in Season 7 reached Gold or above will get the avatar frame for the corresponding tier. But the Onmyoji frame will only be granted to players who are still in Onmyoji tier at the end of Season 7.

After Season 7 starts, players who joined at least 60 5v5 matches in Season 6 with an average punishment rating of less than 0.025 per match (number of punishments/total matches) will receive Jorogumo’s S6 exclusive Art of War skin, Art of War: Venom Bite.

After Season 7 Starts, the match data of Season 6 will be added to the Season Momento.

After Season 7 Starts, all players’ shikigami Power will be reset a certain amount based on their Power from Season 1 to Season 6.

Players will take part in 1v1 battles on the narrow lanes of Duel Grounds. You can set the victory conditions for even purer competition of skills! Duel Grounds also supports creation of rooms, so players can carry out 1v1 battles against friends via Battle – Custom Game – Duel Grounds.

Map for Diamond tier and below: Removed the row of brush near the river in the middle lane.

Optimized the team forming rules. The tier level of the room owner will no longer be used to determine whether teams can be formed. Instead, it will be determined by the overall tier situation of teams in the room.

Decreased the stats of monsters in the maps of Casual Matches and Ranked Matches for Elite tier and below.

Onmyoji Arena has adjusted and upgraded onmyodo with the hopes of providing more strategic selection so that you can have different gameplay experiences with the same shikigami by using different onmyodo combinations.

For previous onmyodo, you could select from 3 stats with each stat taking up 2 slots. However, there were almost no shikigami who required selection of different stats at the same time. Because of this, we have combined the same type of stats, doubling their value and combining them into the same slot. Also, we have added a slot for ability-type onmyodo. We hope that this will provide more strategic combinations for the shikigami.

You can select the following for the first ability-type onmyodo slot: Mortality, Shatter, Soul Ward, Clairvoyance.

Onmyoji Arena has added 3 all-new onmyodo to the selection for the middle slot. These include Spirit Fish Protection—increase ability to take damage for tanks, Occult: Pursuit—increase attack speed burst for a short duration, and Sorcery: Change, which has a special gameplay.

Spirit Fish Protection: If damage taken within 5 seconds is equal to 10% of Max HP, Armor and Magic Resist is increased by 80 plus 35% for 3 seconds. At the same time, (8*level) magic damage is dealt to surrounding enemies every second. Cooldown: 20 seconds.

Occult: Pursuit: If enemy shikigami are hit with basic attacks 2 times within 5 seconds, attack speed is increased by 30 (+4*level)% for 3 seconds. Cooldown: 15 seconds.

Sorcery: Change: After leaving the battle for 3 seconds, you can switch to a spell that you carry. After using that spell or after 60 seconds, it will switch back to the original spell. Cooldown: 90 seconds. This ability can be used 100 seconds after the start of the battle. After switching, the cooldown of the spell is 3 times that of the original.

Occult: Panther Eyes will only grant a Movement Speed bonus when moving towards enemies. There is a lot of restriction on its use, but the buff effect provided is not high enough. We have redesigned this onmyodo, in hopes that it will provide a certain amount of buff when both attacking and retreating.

Umbrella Shield: Changed “Increases Armor and Magic Resist of self when under a great controlling effect” to “when casting ultimate ability, increases Reduce Control by 20%. Cooldown: 30 seconds”.

Clairvoyance: Every seal or assist on an enemy shikigami, or sealing 3 monsters, will permanently increase your Max HP by 0.4%, up to a maximum of 10 times. At maximum, Max HP will be increased by an additional 2%.

Omen Starlight: Restore 15 (+5%*lost HP) HP to self after dealing damage to enemies, restoring an additional 50% HP if the damage is dealt to enemy shikigami. Cooldown: 15 seconds.

To allow Sorcery: Star to support shikigami in continuous battle, we have changed the damage increase effect at full stacks to Life Steal and Spell Vampire, in hope that this will provide a certain survivability on top of the damage bonus. At the same time, we have also made value adjustments to the other onmyodo in the middle slot, so that the buffs provided by onmyodo in the same position are similar.

Sorcery: Star: The additional 2% increase to damage at full stacks have been changed to 5% Life Steal and Spell Vampire.

Summon: Purgatory: Minions will not trigger Purgatory, and the damage range has been increased from 200 yards to 240 yards. Ability Power bonus adjusted from 10% to 15%, and extra Attack Damage bonus from 25% to 32.5%.

We have also made value adjustments to onmyodo in the other slots.

At the same time, for this season, we have also optimized the usage rules for the Lv. 100 reward, S7 Art of War Skin·Superior. After obtaining this item, players will be able to try out using this kind, with the trail period being until the start of the next season.

Added a new random quest related to Mahjong Fight to Daily Quests. Complete it to get Mahjong Koban rewards. Incomplete quests will be saved in this quest slot, up to a maximum of 3 incomplete quests.