The Onmyoji Arena Ranked Match Season 8 has officially started! The exclusive skin for this season belongs to Ryomen and Kamaitachi! 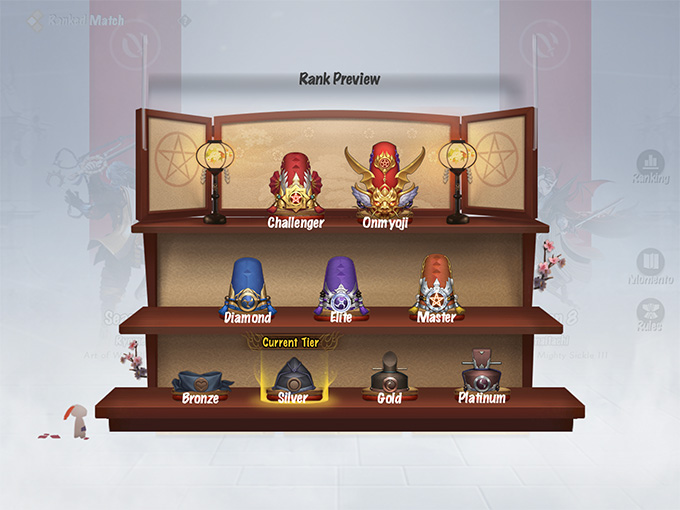 You will obtain 1 soul fire with every victory in Ranked Match. Conversely, you will lose 1 soul fire with every defeat in Ranked Match. A hidden score will be recorded for each Ranked match result according to the performance of the match. After meeting the conditions, you trigger “Eligibility approved” upon victory and receive 1 additional soul fire. You will trigger “Blessing” upon defeat if you met the conditions, and protect the soul fire for that match.

Ranked Match Tiers for Challenger and above will be according to win points. At the end of each match, the win points will be increased or decreased according to the results of the match and the standard difference of the both teams.

Ranked Match consists of 8 tiers: Bronze, Silver, Gold, Platinum, Diamond, Elite, Master and Challenger. There are 3 sub-tiers for Bronze, 4 sub-tiers for Silver, 5 sub-tiers for Gold to Master, and win points for Challenger tier.

All shikigami are allowed for tiers Diamond and below, and there will be no vision fog on the battlefield.

Shikigami banning mode is activated for Elite tier, and there will be no vision fog on the battlefield.

Shikigami banning mode is activated for Master tier and above, and there will be vision fog on the battlefield.

If player for different tiers forms a group, the rules of the map selection will be according to that of the tier of the player with the highest tier.

If you meet the requirements, you can directly claim the rank skin. Skin will be sent to the eligible players after season calculation.

How to check your average punishment: Tap on the [?] paper doll on the upper right corner in the lobby, select Art of War Query then tap on the Query button.