Let’s check out Onmyoji Arena January 17th 2020 Update Patch Notes. This update sees Onikiri make his official debut on the Heian-kyo battlefield and Tesso will first be available during this week’s Shikigami Brawl.

Of these shikigami, Dodomeki and Ittan-momen have a difficulty of Extreme. Onmyoji who have been in Heian-kyo for less than 7 days can’t use them in battle for free.

This week sees Onikiri make his official debut on the Heian-kyo battlefield. Onikiri’s dyed skin, Clear Understanding, is also available to purchase in the Skin Shop.

As an ability type Marksman with a longer growth period, Tesso’s Ability 1 and ultimate ability are his main methods of dealing damage. As all his ability effects are affected by his trait bonus, he needs to farm quietly in the early game until he has gotten some Incense Money before joining battles to deal heavy damage.

The more Incense Money Tesso has, the more targets the splash effect will deal damage to.

Tesso throws an alms bowl towards the designated area, dealing physical damage and Slow to enemies within range. At the same time, Incense Money is stolen from the enemies. The stolen Incense Money will last for a period of time.

Tesso quickly spins in his Coin Wheel, increasing his Movement Speed for some time. He also leaves a trail of golden wealth behind him, which slows enemies within the trail. When his Movement Speed is increased, Tesso can use abilities and basic attacks while moving.

The effects of the Movement Speed increase and Slow are increased based on the number of Incense Money Tesso has.

Tesso releases coins that surround him. The coins automatically chase down enemies around him. Each coin deals physical damage to the target.

The more Incense Money Tesso has, the more coins he will release.

Tesso will first be available during this week’s Shikigami Brawl.

NetEase Games has redesigned some of Hana’s abilities. We have removed the bird stacking mechanic of her original trait, we hope this will provide a better game experience. At the same time, we have increased the amount of HP she restores to herself and teammates when enemies within the Nectar realm take damage, increasing her survivability and support capabilities.

If there are no ally shikigami within the Nectar realm that do not have full HP, Hana will automatically restore HP when Vigor is fully stacked next, or after a few seconds.

Hana releases flying birds in the designated direction to deal magic damage and a Slow to hit enemies. Flying birds will scatter after hitting an enemy shikigami or monster, then will fly toward an ally shikigami within the Nectar realm after a short delay, giving them a shield that can absorb damage and dealing magic damage to any enemies hit on the way. The same target will only take damage once.

Hana forms a flower realm at the designated position to deal magic damage to enemies within the range. When Hana’s ability or an ally shikigami’s basic attack hits enemy shikigami within range, it will immobilize them. This effect has a cooldown against the same target.

Hana will directly join the Heian-kyo Battlefield after this week’s maintenance.

After Satori is fully equipped, her damage output, tankiness and flexibility are all very high, making her hard to due with. We have suitably reduced Satori’s base damage and increased her additional Attack Damage Bonus, in hopes that her DPS capability will be more reliant on Attack Damage and items.

Adjusted damage level bonus from 10 to 6.

Because of the bonus from his Ability 1 (Lament) and Ability 2 (Demonic Punch), Shuten Doji’s current mainstream build is similar to many Assassins. This causes Shuten Doji to have very little room for making mistakes. We have adjusted the overall bonus of Shuten Doji’s abilities, so that the HP regen of Ability 1 is dependent on Max HP, and adjusted the Attack Damage Bonus of Ability 2.

After considering the casting duration of Kosodenote’s ultimate ability, we have removed the untargetability of her ultimate ability and replaced it with damage reduction when casting, to ensure that Kosodenote is still capable of taking part in teamfights.

Removed the untargetability when casting.

Although Yuki has strong control capabilities against a single target, his damage output and survivability are very reliant on items. We have increased the base damage of Yuki’s Ability 1 and Ability 2’s Stage 2 so that Yuki is less reliant on DPS items.

Stage 2 will not stack Frost.

Dodomeki has two abilities with 2-stage casting, making the mechanic of sealing to refresh abilities while in the Evil Light state difficult to use. We have changed this to extending the duration of Evil Light by two seconds when a seal is carried out in the Evil Light state. We have also increased the duration that Dodomeki stays at the destination after using Ability 3, hoping that this will reduce the difficulty of using Dodomeki.

We also adjusted the cooldown, range, and regen of Ability 2, to reduce the effect of the passive’s refresh time removal.

Adjusted the duration that Haunting Eye will stay at the flight destination from 0.6 seconds to 1 second.

May you be prosperous! It’s time for Red Packets! During the event, players level 10 or higher will be able to claim Auspicious Red Packets when they log in to the game! Open them to get Jade, Wish Ema, advanced Favor items, and other rare rewards! 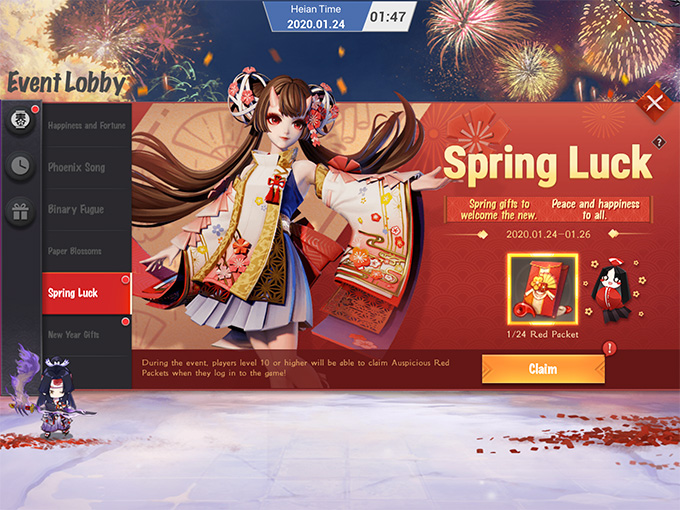 May you have both happiness and fortune, and may good luck come your way! During the event, players will enjoy Coin and Proficiency Bonuses throughout the day. Log in to the game daily and stay online to claim Spring Packs. 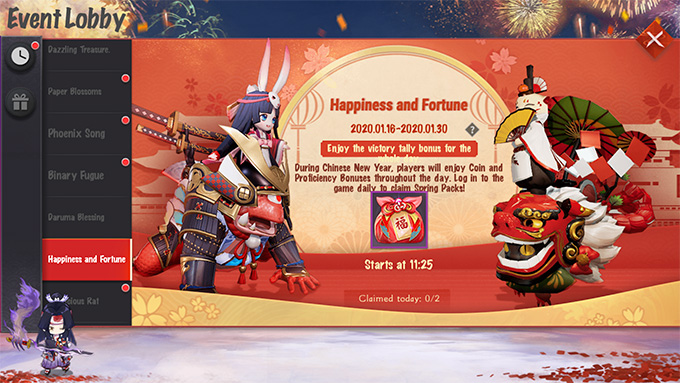 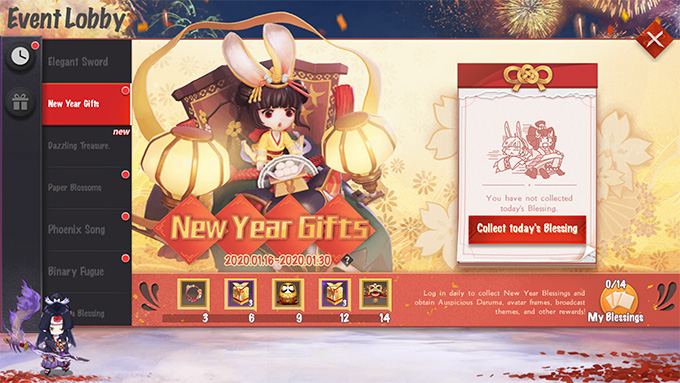 Onikiri’s Metacognitive Decoding series skin, Binary Fugue is available for a limited time from January 17th to January 30th, 2020, with a 12% discount during the first week.

Hana’s LNY Carnival series skin, Phoenix Song is available for a limited time from January 17th to January 30th, 2020, with a 12% discount during the first week.

Momo’s LNY Carnival series skin, Paper Blossoms is now available, with a 12% discount for a limited time from January 17th to January 23th, 2020.

During the event, if your recharge meets the requirements, you can get rewards including Mystery Vouchers, Wish Charms, Evolution Amulets and rare avatar frames! 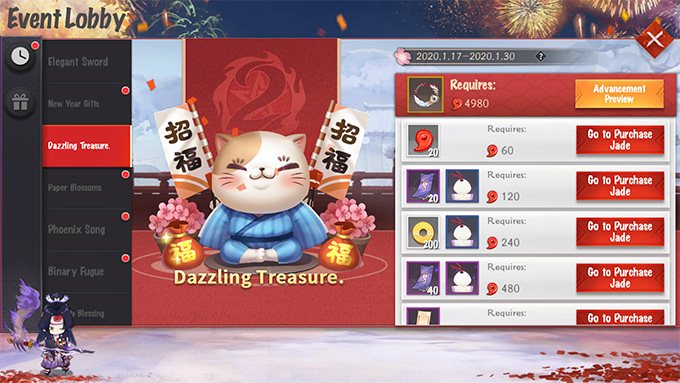 Hang up the festive decorations as we welcome the new year! Mahjong Fight’s Festive New Year: Set is available for a limited time from January 17th to February 6th, 2020. 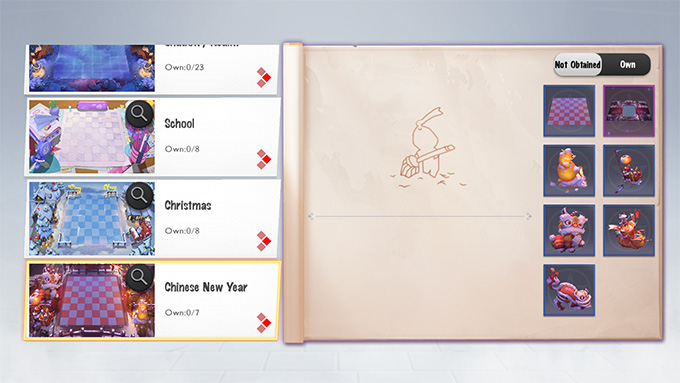