Active equipment has been replace by the ability of Blood Ritual.

With each kill, Sinestrea gains 1 Blood Bramble. If Sinestrea has 7 Blood Bramble, she will be resurrected and fully restored right after Blood Ritual. 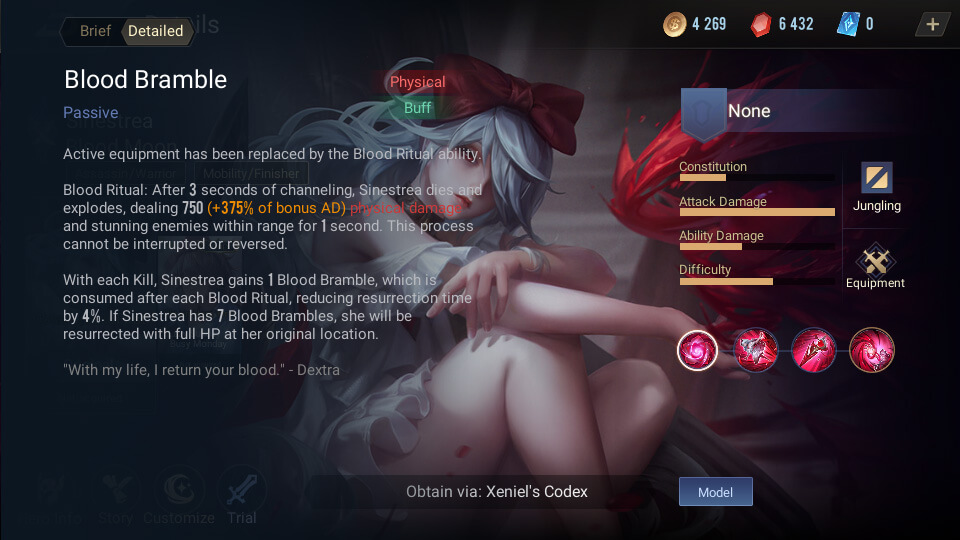 Sinestrea moves towards the designated area and then falls right asleep.

Passive: If Sinestrea does not move for 2.5 seconds, she will fall asleep and become invisible.

In melee, her next Normal Attack with Pierce. 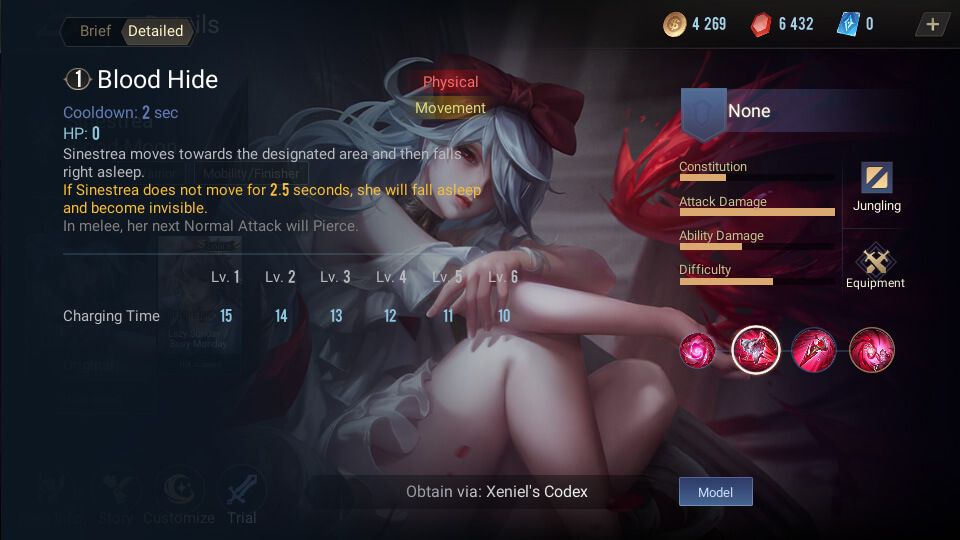 Switches between melee and ranged modes.

Cancel ranged mode to call the blood sword, giving Sinestrea HP Regen effect and dealing damage to enemies in her path. Call the sword onto the target location to make it explode at the end of its path. 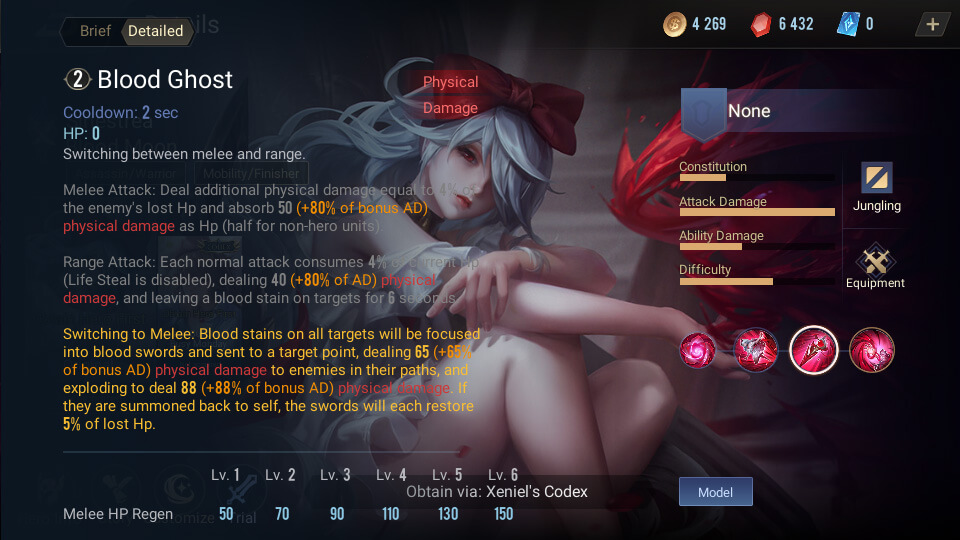 After a 0.5-second ritual (can be used while disabled), shares total HP with the target.

Passive: When Sinestrea’s HP is below a certain percentage, her Movement Speed will be increased. 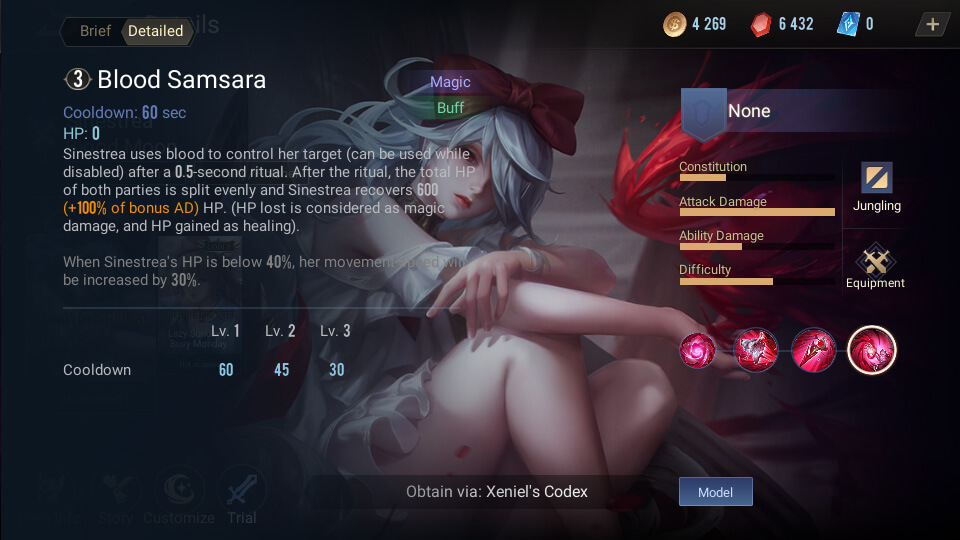 Blood. It dries slowly in the night wind.

Sinestrea pulled at her thin nightgown, trying to hold in every bit of warmth. Below the nightgown was a pair of pretty bare feet rustling through twigs, leaves, and mud. Right now, all she wanted to do was get as far as possible from that place she once called home.

A sudden attack in the night massacred the manor on the outskirts of Kazell. Except for Sinestrea, curled up in a doghouse, everyone else was butchered by the men in black. She had already forgotten how she had evaded discovery, or how she had escaped the manor. She only knew her back was getting colder, and her vision was getting fuzzier.

In the haze, Sinestrea thought she saw a sliver of light, and her frozen heart could not help but warm up.

Was it morning? Or…

All at once, the exhaustion of her journey overwhelmed her brain. The world was spinning, and everything was going black…all light…all color…everything was flowing into a whirlpool of darkness from which there was no escape.

Sinestrea’s heart gave a ferocious beat. How could she give up so easily?! Before her very eyes, all that beauty had been destroyed, and her entire family had become a pile of corpses. A fog of fear had settled over her heart, but that fog nourished a seed—a seed called revenge!

A flash of scarlet burst through the darkness and the corner of her mouth was bleeding.

Opening her sleepy eyes, she found herself lying on someone’s large, broad back. The owner of that back was Dextra, who was steadily climbing up a narrow ridge.

It had obviously been a nightmare.

Sinestrea was somewhat annoyed; she should not have been sleeping at this time. But she was too tired, and Dextra’s back was as comfortable as ever. Try as she might, she could not stop herself from indulging in this moment of calm. Fortunately, the road was smooth, and there were no eyeless Lokheim monsters jumping out at them.

Sinestrea looked around. The pillar of light, originally as wide as a birch tree, had shrunk to half its size, but it had gotten much closer. Dextra had said that that pillar was their hope of getting home—as long as they reached the seal before the pillar disappeared entirely.

The home she spoke of was not the manor that appeared in her nightmares, but a small cabin that Dextra had built in the woods. After fleeing the manor, Sinestrea had gone deeper and deeper into the forest. That was how she met the half-elf Dextra, who had been out hunting late at night. For some reason, Dextra decided to take in the poor girl, and the two spent a short but pleasant time together.

But Sinestrea’s pursuers once again shattered her hopes for the future, and this time the innocent Dextra was dragged into the mess as well. The two fled the whole way to the Abyssal Rift, where they had no choice but to jump in to save their lives. It was in this dark and bloody land that the demonic power in Sinestrea’s veins first awakened.

How is it that someone so obviously human could have demonic blood flowing inside her? It must be some massive joke.

Sinestrea could not take anymore and began to rub the long strands of Dextra’s hair. Of all the people in the world, perhaps only the girl in front of her could understand what she was feeling: a half-elf who had experienced the malice of humans, yet was not accepted by elves, and a half-demon who was born in a human city but discovered her true self in the Abyss. It would seem these two companions were made for each other.

Dextra’s stride lengthened in response to Sinestrea’s movement. Since the girl was awake, she no longer needed to worry about dropping her.

Soon they reached the end of the road. The rugged ridge ended here, like an Abyssal Dragon with its head cut off. Stretched across their path was a massive tangle of roots—the roots of the World Tree, as Dextra had said, and the seal that held the Abyssal Rift at bay.

“Yes,” Dextra said. She placed Sinestrea down gently, turned around, and gave her a big hug. “But not we. Only you.”

Dextra patted her head. “The World Tree will not allow any life tainted by Abyssal power to return to Athanor…we’ve been here too long. I’ve already been corrupted by the Abyss, but you…it seems you’ve always been from here…”

Sinestrea just felt dizzy. The black vortex that haunted her dreams now appeared before her in reality, growing a little larger, starting to swallow up the person in front of her. She saw Dextra’s mouth moving like she was telling her something important, but Sinestrea heard no sound. Everything was silent.

First hearing, then smell, then taste, then touch vanished along with Sinestrea’s rapidly fogging vision.

Had she exerted herself too much in that last battle? Or was it a side effect of her powers?

Sinestrea started to feel terror—the terror of falling in the darkness before dawn, just like it always happened in her nightmares.

She was already here. Just one more step, and she would be home…how could she? How could she!

Just then, a red halo erupted from the center of the vortex!

In that instant, all her senses returned, and she heard Dextra’s murmurs clearly.

“In fact, when I first found you, I thought I was just picking up a stray to keep me company. Who would have thought I’d consider your family one day? And now I’m risking my life for you! Aren’t I a fool?”

“Yes! You are a fool!” Sinestrea returned the embrace as tightly as if it were that single nightgown she wore on that first, cold night. “And a lying fool!”

After saying that they would go home together, why did she decide to stay behind?

Sinestrea felt Dextra’s life rapidly flowing out of here. This silly woman was using a trick Sinestrea herself had taught her, and she was using it to force out her own elf blood. Drop after drop of blood pulsed back to her heart, but this meant that the remaining human blood would quickly be corrupted by the Abyss.

Apparently, elf blood could have some sort of effect on the World Tree.

But is it worth your life just to open one seal?

With each gasp of breath, Sinestrea’s strength flooded back into her, and all her magic returned with the wave of energy. Blood surged through every inch of her flesh and spread along her veins right back into Dextra.

This wasn’t the first time something like this had happened.

On that night of terror…in that moment when she leaped into the Abyssal Rift…Sinestrea never failed to discover extraordinary powers in a crisis.

And now it was Sinestrea’s third awakening!

Setting the aching Dextra gently on the ground, she surveyed the roots choking the path. With a quick leap, she continued on.

The pillar of light that fell down through the seal trembled slightly as it locked on to her red form.

The seal was active.

Sinestrea smiled and extended a delicate white hand, pressing it to the thorny roots. The barbs pierced deep into her palm.

The blood seeped through the dry bark and deep into the roots. Inch by inch, they too became the color of blood.

In the blink of an eye, those roots were robbed of their vibrant green and filled with a grisly red. The pillar of light, her hope of returning home, shrank at the touch of the blood, shrank until it disappeared.

Had the seal shut the way completely?

Sinestrea frowned and made a fist. Rivulets of blood ran out and just slithered like serpents across the roots…

It was almost as if these roots had a life of their own. They thrashed like an Abyssal Dragon, trying and failing to throw off the bloody serpents that coiled around them.

As the serpents swelled, the roots’ struggling weakened.

Eventually, the roots went still, the snakes slithered together into a single mass, and then they burst into a mess of bloody clouds.

Drip, drip, drip…down in the Abyssal Rift, which has no weather, rain had started to fall.

A storm, even. And it was blood-red!

Then the ground shook, the mountains crumbled, the wind roared, and thunder crashed…

The sunlight of Athanor shined down, spreading over Sinestrea’s frail body in a golden-red aura.

At that moment, in that demon fallen from Mt. Orphean, the two opposing essences, the holy and the profane, combined into a harmonious, perfect whole.

Under that stormy sky she gathered all her strength. The Lokheim monsters who had been chasing her were either lying flat on the ground or hiding in their holes. She felt that if she wanted, she could turn them all into a puddle of blood.

But Sinestrea had no time for them, for Dextra could barely keep herself upright.

Silently, Sinestrea turned and pointed her bloody hand at Dextra.

The blood around them gathered at Sinestrea’s fingertips as though answering a call, then flowed into Dextra’s body.

Sinestrea directed the blood with care, pulling Dextra gently to her side.

Dextra opened her whitened lips, but no sound came out.

Sinestrea laughed that soundless laugh, for she had already heard. She held Dextra’s head in her hands.

She pressed her crimson lips to Dextra’s cold forehead.

It was both sisterly affection and a binding agreement.

The roiling blood rushed quicker and penetrated into Dextra’s body, where it turned into a sort of living being.

“From now on, your blood is my blood!” Sinestrea cried.

Dextra groggily reached out and pulled Sinestrea into her arms. 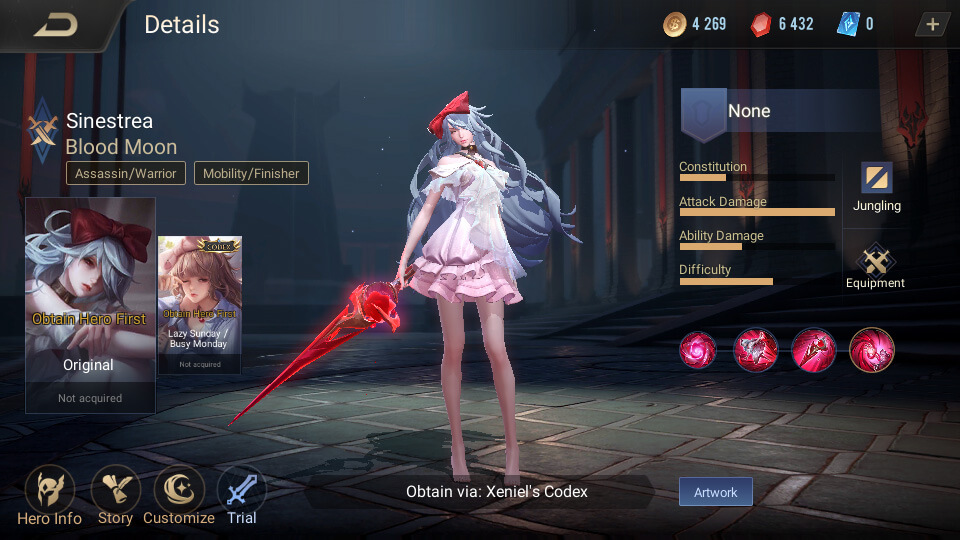 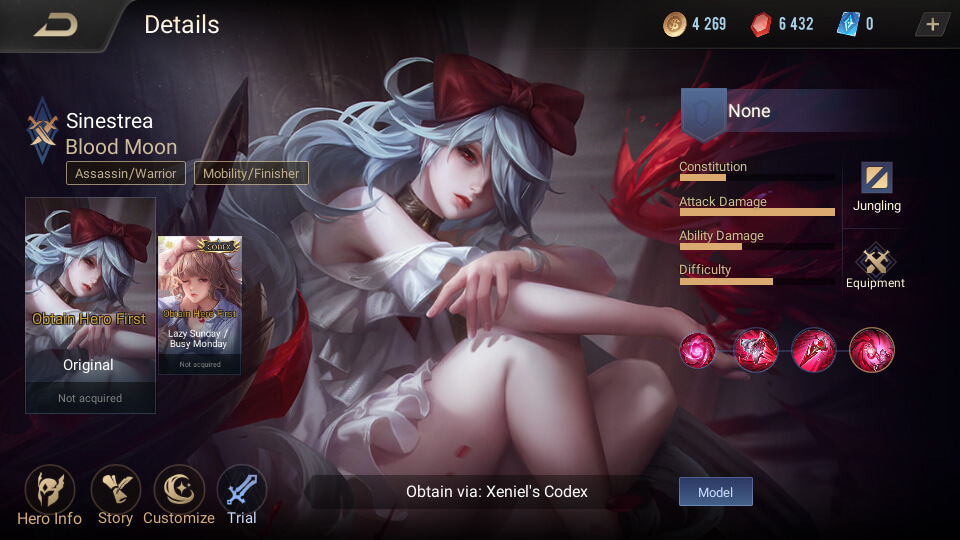 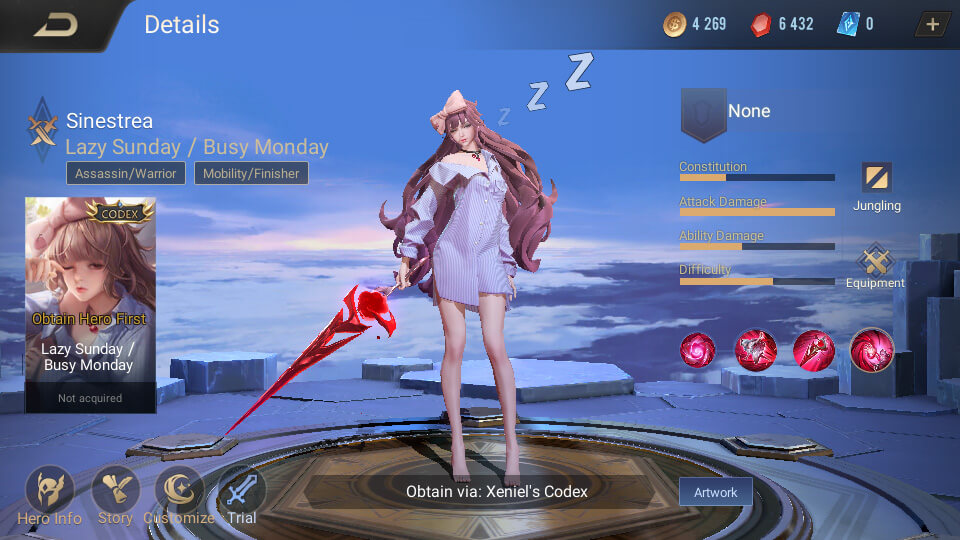 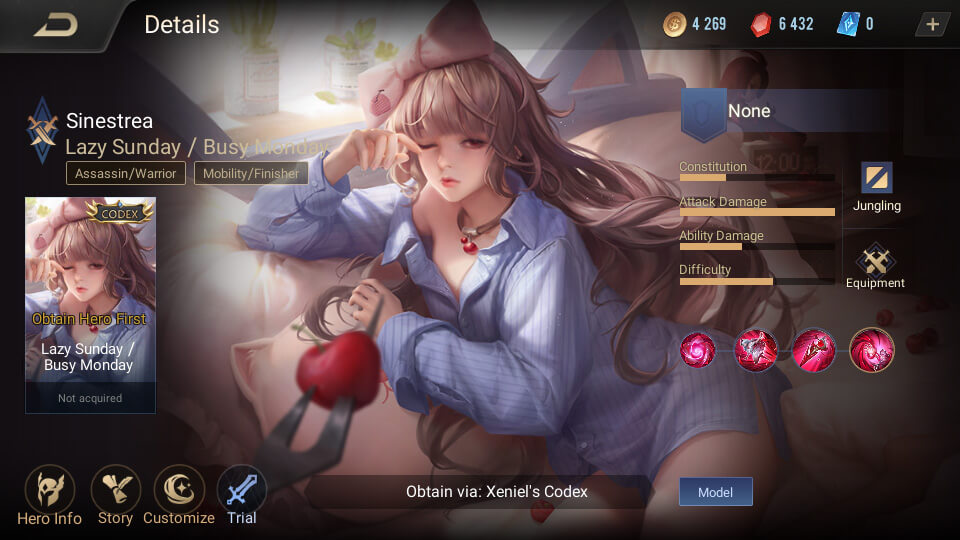 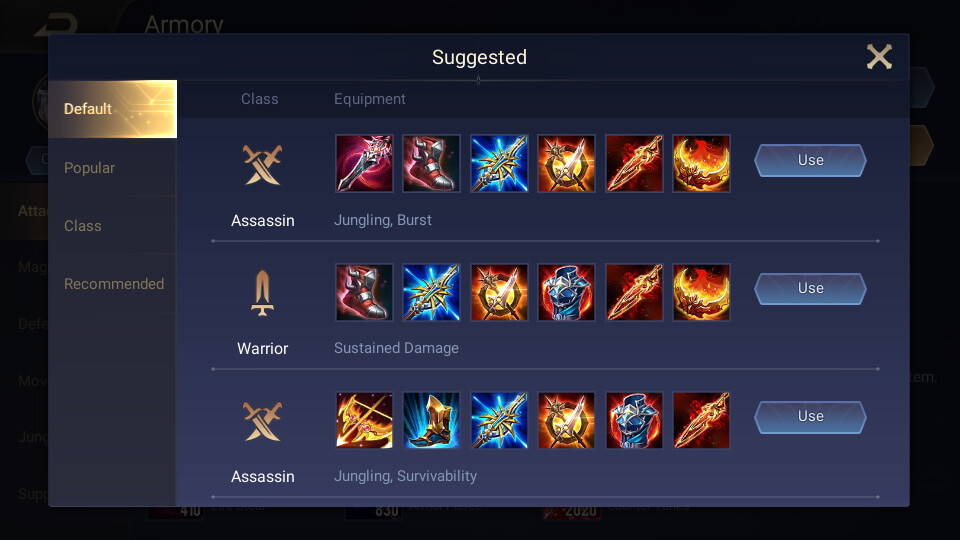 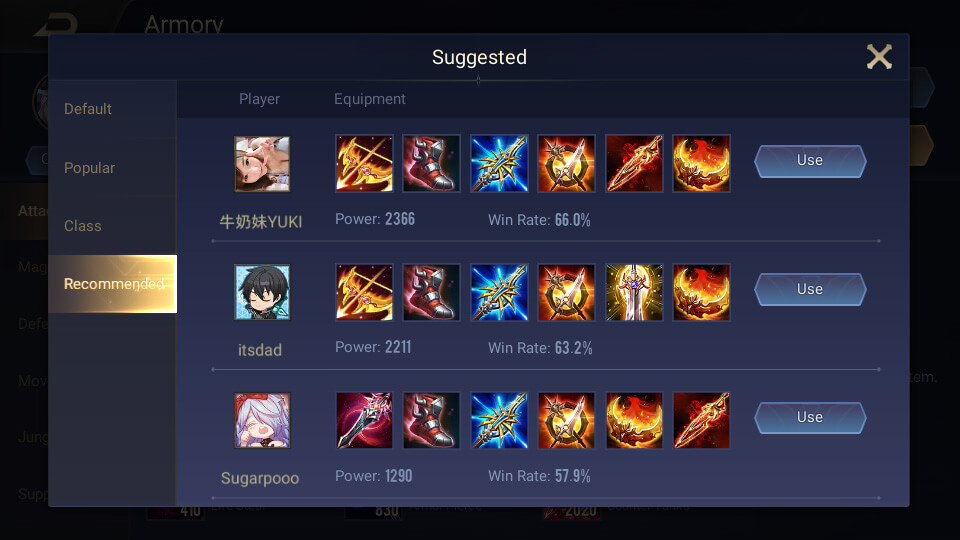 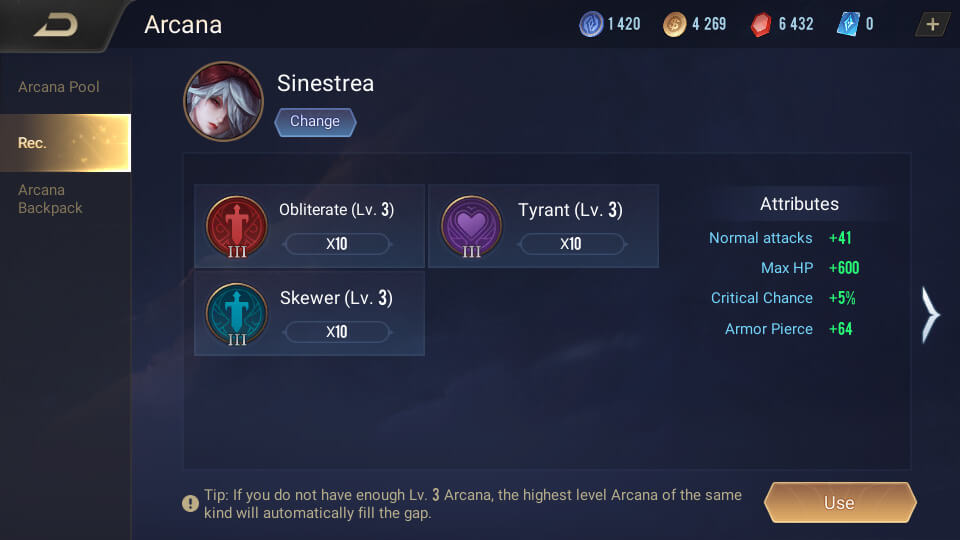 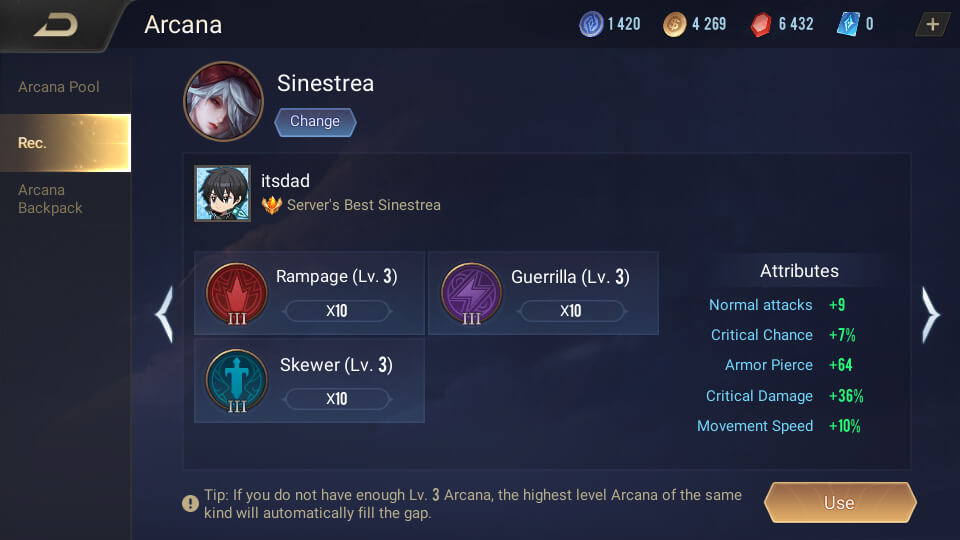 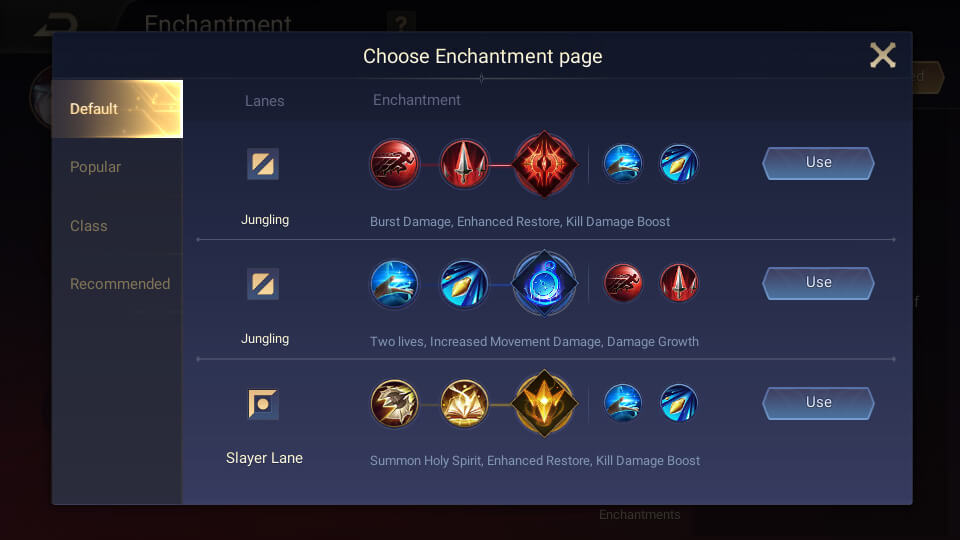 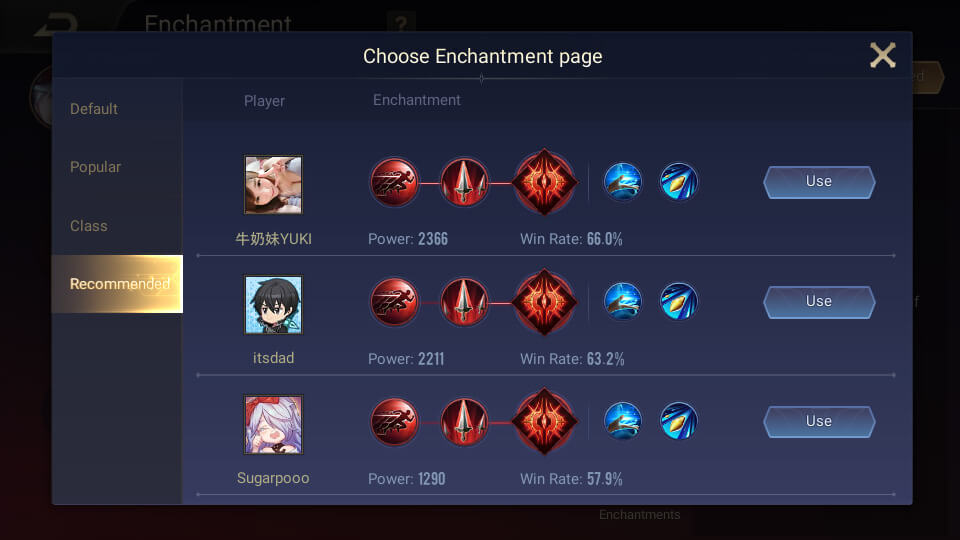