Of these shikigami, Hone Onna, Puppeteer and Maestro have a difficulty of Extreme. Onmyoji who have been in Heian-kyo for less than 7 days can’t use them for free in battle. 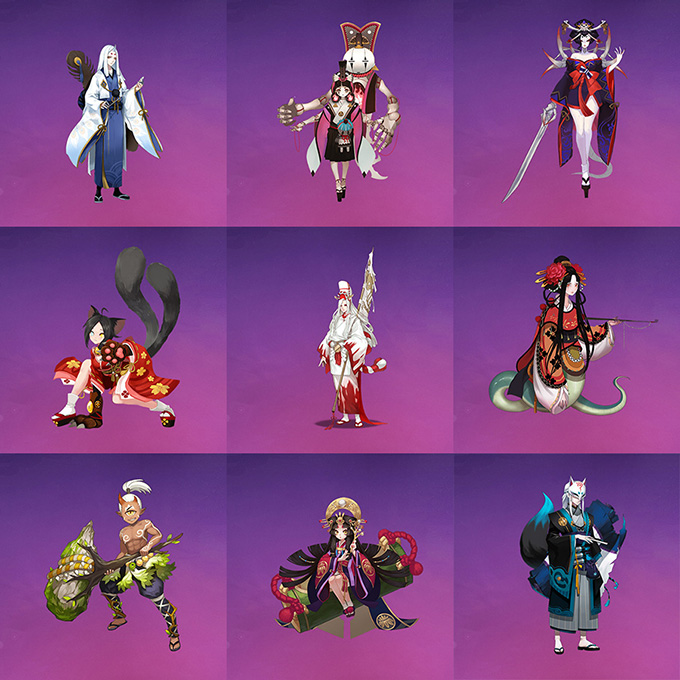 Adjusted Slow duration after hitting a target’s weakness from 1 second to 0.5 seconds.

Increased the cast distance from 450 yards to 550 yards.

Fixed the issue that the actual width of the bullet for her Ability 3 is bigger than the indicator, which led to a low hit rate.

All members of the same team will use the same Shikigami.To balance the gameplay, Shikigami will receive different bonuses according to which role they are playing.

A small long spear will be created when triggering the Shura mark on a shikigami. Long spear will fall to attack the target after 3 seconds.

After the ability is enhanced, if the ability hits an enemy shikigami, Sacred Realm will be created beneath the target.

Event Period: April 19th after maintenance to May 9th

During the event, you can use Sakura Cards to exchange for character shards and exclusive crossover Avatar Frame. Collect 50 shards to summon crossover shikigami!

Shard exchange will be available. You can also exchange for the shards of the shikigami that you already unlocked. Exchanged shards will be stored in your backpack and won’t be expired.

Event Period: April 19th after maintenance to May 9th.

During the event, Shard Packs of crossover shikigami will be added in the Shop.

Event Period: April 19th after maintenance to May 9th.

During the event, you can join battles to get Sakura Petals and exchange Sakura Petals for Sakura Cards and get attempts at answering questions.

Answer questions to get generous rewards. Come and test your knowledge about Heian-kyo.

Log in to the game during the event to claim 3 Decoy Fire.

Decoy Fires can prevent one soul fire from being extinguished when onmyoji of Challenger tier or below take part in Ranked Match in a team.

During the event, when you join Ranked Matches during 18:00 – 23:00, you can earn double bonuses for the first 3 battles including coin bonus, bond bonus and shikigami proficiency bonus.
Bonuses differ daily. Further details can be checked via the schedule list.

2. Fixed the issue that Kuro Mujou’s Ability 1: Soul Eater will lag if it finishes its cooldown when attacking.

3. Optimized the display effect in the Spectate interface.

4. Fixed the issue that the skins in the shop were not displayed in the correct time order.