Mannendake’s Dream of Clouds series skin, Ethereal Sword, will be available in the Skin Shop from December 16th after maintenance with a 12% discount during the first two weeks. Don’t miss out! 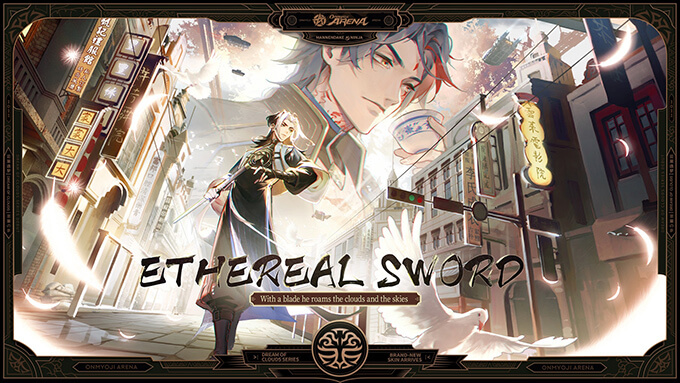 During the event, complete the Wishes Come True event quests to flip over the skin cards. On 12/31/2022, players can choose 1 of the 4 skin cards and obtain the corresponding epic skin.

The skin exchange feature for the Wishes Come True event is now available. Players can exchange the skin cards that they have flipped over with one another. There is a limit to the maximum number of times players can exchange cards, so think it over carefully. We hope that all our players will be able to get the skin they want!

There’s also an extra bonus for the 5th Year Anniversary Wishes Come True event. There’s a chance that the Hakuro-exclusive skin, Sho (Heian Festival), will appear in your card pool! However, take note that you can’t exchange this exclusive skin with other players!

As Satori is relatively weak in the late game, we’ve reduced the cooldown of her Ability 3 and increased the damage of her ultimate ability in the hope that this will make her stronger in the late game.

Satori can no longer hit the Club Bomb of a Satori on the opposing team.

As Kinnara is currently rather powerful overall, we’ve reduced the damage of her ultimate ability while maintaining her high mobility characteristics.

Optimized the display clarity of the range circle.

Reduced the duration of Eye of the Watcher from 5 seconds to 3 seconds.

As Hannya is relatively weak overall, we’ve increased his skill damage in the hope that this will increase his suppression and harassing capabilities in the laning phase.

Among the Mid lane shikigami, Kiyohime is rather powerful on the whole. Due to the high Control Reduction of her ultimate ability, it is very difficult for enemies to effectively target her once she has obtained the advantage. That’s why we’ve reduced her late game damage and her Damage Reduction effect.

Yasha’s flexibility allows him gain the advantage in small-scale battles during the early game. However, in the mid-to-late game, there is less room for error during teamfights. Overall, he is relatively weak among jungler shikigami. That’s why we’ve increased the growth of his Ability 3 and ultimate ability in the hope that this will improve his performance in the mid-to-late game.

The stats provided by Summer Ashes are highly universal and cost-effective. At the same time, its item special effects can provide high damage during a prolonged battle. This has resulted in Summer Ashes being too widely-used and its cost effectiveness being too high. We will suitably reduce the cost effectiveness of its stats to lower its priority among shikigami relying on Ability Power and Attack Damage.

In the official modes Ranked Match, Match Mode, and Fun Mode (excluding Mahjong Fight and Shikigami Defense), the damage over time effect applied to shikigami will not interrupt the HP regen gained from leveling up.

We will change the lineup of the limited-time free shikigami at 5:00 AM on 12/19. The new free shikigami will be Enma, Momo, Enmusubi, Jorogumo, Shishio, Kiyohime, Mouba, and Yokinshi.

Onmyoji who own the God of Fortune Month Pact will have the additional free shikigami, Kidomaru and Kamimai.

Of these shikigami, Mouba and Yokinshi have a difficulty of Hard. Onmyoji who have been in Heian-kyo for less than 7 days can’t use them in battle for free.