Onmyoji Arena will change the lineup of the limited-time free shikigami at 5:00 AM on June 28th, 2021. The new free shikigami will be Kidomaru, Enmusubi, Aobozu, Hououga, Kingyo, Kainin, Kamaitachi, and Yokinshi.

Onmyoji who own the God of Fortune Month Pact will have the additional free shikigami, Enenra and Zashiki.

Of these shikigami, Kamaitachi and Yokinshi have a difficulty of Hard. Onmyoji who have been in Heian-kyo for less than 7 days can’t use them in battle for free.

“I can finally come out for some fresh air!”

Shouzu is a young lady with a body of human and a tail of a fish who sits in a shell. She is curious about humans and their world. She imagines it to be full of beauty and surprises. In Heian-kyo, Shouzu’s positioning is a Support that leans toward control and protection who can use terrain to increase the effects of her abilities and restrict enemy movement. Shouzu’s Ultimate Ability: Ocean Stream allows her to share damage taken by ally shikigami and provide her teammates with protection.

Shouzu shoots a water bomb in the designated direction, dealing magic damage to enemies hit. If the water bomb hits terrain or Tidal Wall while in flight, it will reflect and split into multiple drops of water that will deal magic damage and inflict Slow to enemies in a fan-shaped area.

Shouzu sends a wave of water in the designated direction, dealing magic damage to enemy units hit and knocking back the first enemy shikigami hit. If the enemy shikigami is knocked back into terrain or Tidal Wall, they will be stunned for a period of time.

Shouzu summons a wave around herself that expands outward, dealing magic damage to enemies within range of the wave and inflicting Slow. It also knocks back enemy shikigami to the edge of the wave. Ally shikigami within the wave will recover a certain amount of HP and form a Life Link with Shouzu that lasts 6 seconds. Damage taken by the ally shikigami will be passed to Shouzu, and they will gain the healing effect from Shouzu’s passive. Shouzu gains a certain Damage Reduction for each Life Link. Life Link breaks when Shouzu’s HP becomes low. 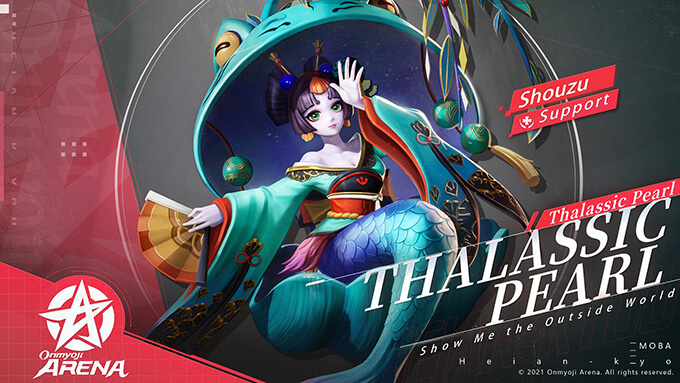 This week sees Shouzu make her official debut on the Heian-kyo battlefield.

The Thalassic Pearl Selection Pack will also be available in the General Store. The selection pack includes the new shikigami Shouzu, Evoluted Form Amulet x1, Taichi Mudra x1, and Eight Petals x8. You can select which to purchase! The Thalassic Pearl Selection Pack will be available till 11:59 PM on 7/8/2021. Don’t miss out on this chance to get Shouzu!

Added an indicator on teammates’ avatars that displays the cooldown of their ultimate ability.

Adjusted the look of the HP bars for Kraken, Sougenbi, Orochi, and Nen in the game.

Added the avatar display of the target shikigami to the Respond button.