Onmyoji Arena will change the lineup of the limited-time free shikigami at 5:00 AM on 3/30. The new free shikigami will be Chin, Hiyoribou, Vampira, Ryomen, Mannendake, Susabi, Kisei, and Kamaitachi.

Of these shikigami, Kisei and Kamaitachi have difficulties of Extreme. Onmyoji who have been in Heian-kyo for less than 7 days can’t use them in battle.

Following the redesign, Ubume’s mid-range and continuous damage specialties will be retained and given more prominence. When her abilities hit, she can gain the Shadow Wing state, which enhances her skills’ Slow effect, which in turn boosts her kiting capabilities and ability hit rate. Some of Ubume’s abilities will retain the apparition effect, which provides greater damage and control bonuses and also increases the gamified nature and connectivity between her abilities. Furthermore, the apparition’s damage type has been changed to magic damage, giving greater flexibility when choosing lanes.

Passive effect: Each time Ubume hits an enemy shikigami or monster with Crane Song or Night Visitor, she gains 1 layer of Shadow Wing, enhancing the Slow effect inflicted by her abilities. This can be stacked up to 4 layers. At 4 layers of Shadow Wing, Ubume’s apparition will deal additional magic damage.

Passive Trigger: When the apparition from Crane Song or Night Visitor hits an enemy shikigami, Ubume recovers HP. The healing effect is decreased if a non-shikigami target is hit.

Ubume sends an apparition in the designated direction, dealing physical damage to enemies along the way and inflicting a Slow effect. This ability has basic attack effects. The apparition stops when it reaches its destination or when it hits a non-minion target, dealing magic damage and inflicting a Slow effect to nearby enemies after a short delay.

Ubume hacks at the designated area three times in quick succession, with each onslaught dealing physical damage to enemies within range. Ubume then slashes at the center of the area, inflicting a small Knockback effect and physical damage on enemies. Each hack will inflict a Slow effect on shikigami hit.

Entanglement Strengthened (Trait): When exploding the mark on a shikigami, restores HP and triggers the Fear effect.

Adjusted cooldown from 8 seconds to 12 seconds.

Everything is Empty Strengthened (Ultimate Ability)

Another April Fool’s Day is upon us, and the Temptress Battle has officially begun! During the event (March 27th after maintenance to April 3rd, 2020), use the event item Temptress Box in-game to change a nearby ally shikigami’s appearance into that of another shikigami. Complete event quests to claim even more rewards! 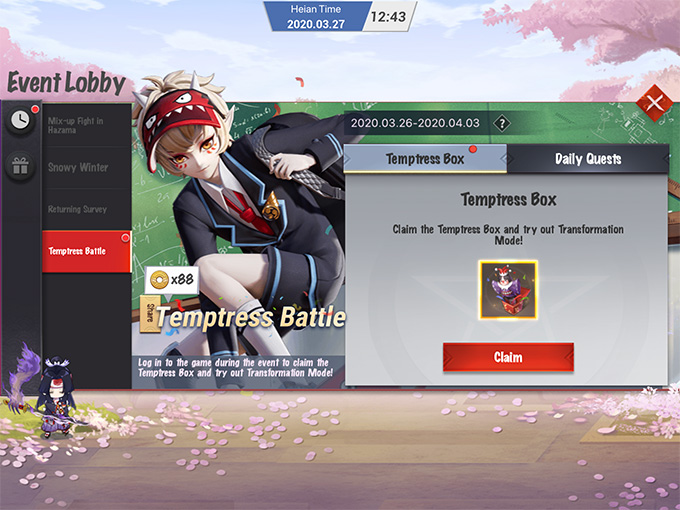 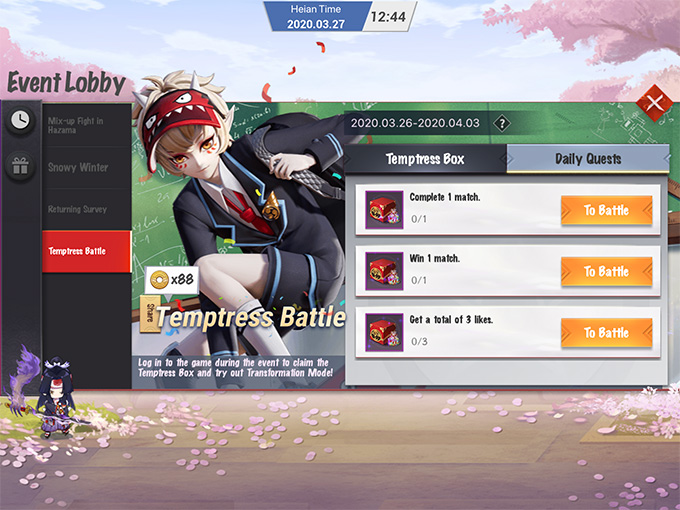