Onmyoji Arena will change the lineup of the limited-time free shikigami at 5:00 AM on November 15th, 2021. The new free shikigami will be Komatsu, Bakekujira, Kuro, Jorogumo, Ootengu, Yumekui, Shiranui, and Kamaitachi.

Onmyoji who own the God of Fortune Month Pact will have the additional free shikigami, Oitsuki and Asura.

Of these shikigami, Shiranui and Kamaitachi have a difficulty of Hard. Onmyoji who have been in Heian-kyo for less than 7 days can’t use them in battle for free.

A shy, timid spirit who has been insecure about her looks ever since she was a caterpillar. “Tomorrow, I will muster up enough courage to fly out of the cocoon…” Mushishi can switch between the Butterfly Dream and Self-actualization states. The Butterfly Dream state allows her to attack the enemy while keeping a safe distance, whereas the Self-actualization is better for chasing down the enemies and taking damage. Time your attack or defense in battle and flexibly switch between the states to make the most use of Mushishi. 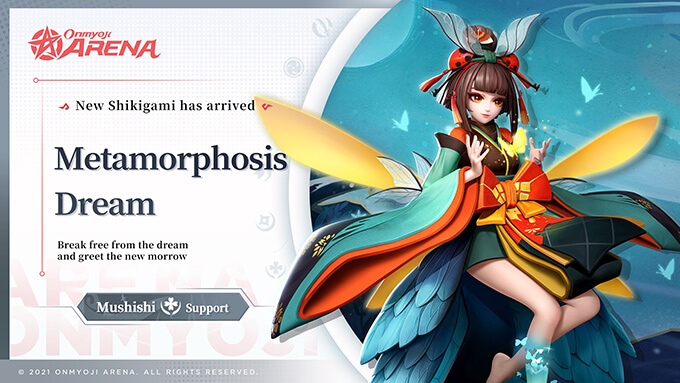 Passive effect: Mushishi can use Dormant Chrysalis/Insects Awaken to switch between the Butterfly Dream and Self-actualization states.

In the Self-actualization state, Mushishi attaches onto a specified ally shikigami nearby and enters the Butterfly Dream state.

At regular intervals, her next Insects Awaken will be enhanced. Mushishi leaps to knock up enemies in the selected area.

When using Insects Awaken in the Returning Butterfly state, Mushishi flies in the selected direction for a fixed distance, dealing damage to units within range.

In the Self-actualization state, Mushishi rushes in the designated direction for a short distance and leaves a trail of pollen. After a short delay, deals damage to enemies within range and inflicts Sleep.

In the Butterfly Dream state, Mushishi flies in the direction of the joystick for a certain period, dealing damage and inflicting a Slow effect to enemies along the way, also accumulating stacks of Insect Trace for herself. At full stacks, Mushishi will inflict Immobilize to subsequent enemies along the way. When the flight ends, she restores HP to the shikigami she is attached to according to the stacks of Insect Trace.

In the Self-actualization state, Mushishi gains a Movement Speed bonus, deals damage, inflicts a Slow effect to enemies she touches, and gains Shield.

In the Butterfly Dream state, Mushishi grants the shikigami she is attached to a shield and briefly increases their Movement Speed.

This week sees Mushishi make her debut on the Heian-kyo battlefield.

The Metamorphosis Dream Selection Pack will also be available in the General Store. The selection pack includes the new shikigami Mushishi, Evolved Form Amulet x1, Taichi Mudra x1, and Weeping Sakura x8. You can select which to purchase! The Metamorphosis Dream Selection Pack will be available till 11:59 PM on 11/25/2021. Don’t miss out on this chance to get Mushishi!

Izaya’s skin, Constant Passage is now available! Get 12% off from November 12th after maintenance to November 18th, 2021. 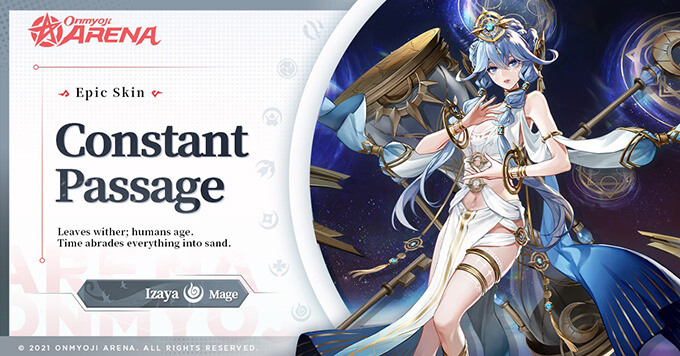