Of these shikigami, Komatsu, Kyonshi Imoto and Yamakaze have a difficulty of Extreme. Onmyoji who have been in Heian-kyo for less than 7 days can’t use them for free in battle. 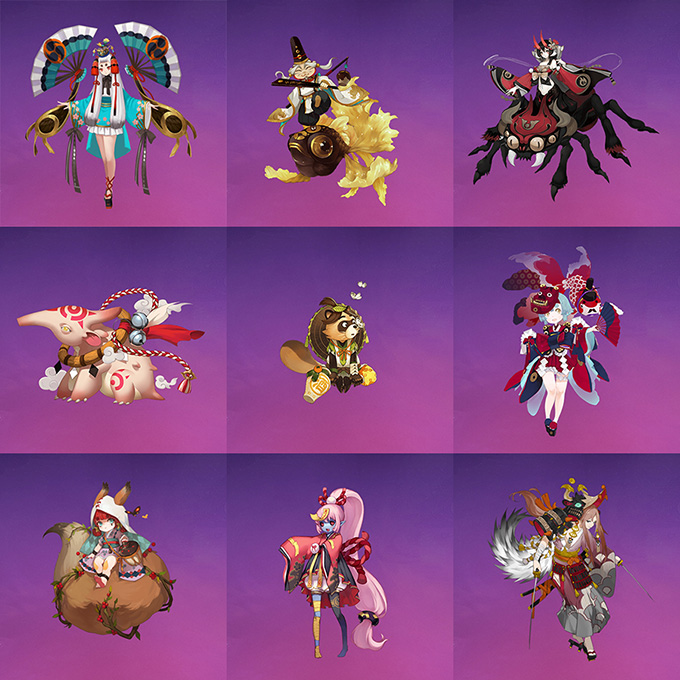 Passive trigger: When Higanbana’s abilities hit an enemy, she can restore HP.

Higanbana releases Deadly Blooms to specified enemies. After hitting a target, it will explode and deal magic damage to the target and enemies around the target. This ability deals extra damage to minions and absorbs flower souls.

If hitting a target marked with the Flower Seal, the explosion range of Deadly Blooms will be increased and a shield that can absorb damage will be added.

Higanbana releases flower seeds in the designated direction to deal magic damage to enemies on the way and increase movement speed by over a period of time. If it hits an enemy shikigami, it can absorb flower souls. After the flower seed flies its max distance, it will fly back to Higanbana. When it flies back, if it hits an enemy shikigami, it will explode and deal magic damage and inflict a Stun effect to enemies within the range.

Higanbana summons a sea of flowers lasting for a period of time in the specified area. Sea of flowers will expand gradually to inflict a Slow effect and deal magic damage per second and add a Flower Seal mark on any enemy shikigami who haven’t left the sea of flower within a certain time. During the duration of the mark, if she hits the target with Deadly Blooms or Bloom Shadow, the mark will be ignited and deal magic damage.

If an enemy shikigami within the sea of flower moves or uses different abilities, Higanbana will gain a number of flower souls.

Higanbana can regen 1 layer of Blood-soaked Flowers after a certain amount of time and can stack up to a 3 layers at most.

If the target hit by Fox Fire is dead, the Immobilize and damage effect of Fox Fire will be triggered in advance instead of disappearing.

Removed the effect of a 20% chance to deal damage one more time.

Maestro’s epic skin, Soul Tune, is available now! The skin is 12% off from April 4th to April 11th, don’t miss out!

Hidden Sting – Strengthened (Ability 1): Other shikigami’s damage dealt to you and control duration on Kosodenote will be greatly decreased when connecting enemy shikigami.