Onmyoji Arena will change the lineup of the limited-time free shikigami at 5:00 AM on December 21st, 2020. The new free shikigami will be Jikikaeru, Karasu Tengu, Kani Hime, Mannendake, Oitsuki, Kusa, Lord Arakawa, and Kamaitachi.

Onmyoji who own the God of Fortune Month Pact will have the additional free shikigami, Onikiri and Tamamonomae.

Of these shikigami, Lord Arakawa and Kamaitachi have a difficulty of Hard. Onmyoji who have been in Heian-kyo for less than 7 days can’t use them in battle for free.

The special targeted shot mechanic of Enma’s ultimate ability makes it rather hard to hit targets, and damage output after hitting a target is rather high. We hope to balance the difficulty of hitting a target and the damage dealt, so we have increased Movement Speed and ballistic width such that Enma can more easily adjust her position and ensure accuracy, while also appropriately decreasing the damage dealt.

Duration increased from 1.5 seconds to 2.5 seconds.

In hopes of giving enemy players more room to counter Shiranui, we have adjusted the ballistic speed of Ability 1: Floating Fan Dance and the maximum recovery amount of Ability 2: Ashen Night. We have also made appropriate adjustments to Shiranui’s HP growth to increase error tolerance.

Adjusted flying speed boost from passing through blazeflies from 40% to 15%.

Currently, to obtain the maximum recovery gain from Takiyasha Hime’s Trait: Moon Slash, she needs to first attack with 3 basic attacks when her Passive is at full stacks, leading to some instances where a choice must be made between using abilities or basic attacks first. Hence, we have decided to adjust the ability effect of her Trait: Moon Slash.

Passive Effect: When Takiyasha Hime hits enemy shikigami or large monsters with abilities or basic attacks, she will gain 1 stack of New Moon Blessing. Each stack grants Ability HP Steal. At maximum of 5 stacks, Attack Range will be increased, and she will gain an additional Attack Damage and Basic Attack HP Steal.

Although we have already made multiple restrictions and adjustments to Yamakaze, some players are still able to use him overly flexibly, leaving opponents with no means to counter. That’s why this time, we have greatly weakened Yamakaze’s survivability limit, and will compensate this with a protective recovery effect for active use in hopes that this will reduce the difference between Yamakaze’s maximum and minimum limits.

In the current version, the addition of the Turret Protection mechanic for turrets together with the bonus damage that Chin’s Trait: Chin Poison and Ability 2: Poison Feathers can deal to turrets has allowed Chin to earn income too quickly in the current environment. We will remove the bonus damage that Chin deals to turrets, and slightly decrease the Movement Speed Bonus from Chin’s Ability 2: Poison Feathers in the early game.

Does not deal bonus damage to turrets now.

Does not deal bonus damage to turrets now.

Hououga’s overall performance in the current environment is not very powerful, and her magic tank build deals low damage, resulting in her being of little threat to the enemy’s DPS. However, her damage taking capability as a pure tank is also insufficient, so we hope that with this adjustment, we can increase her Ability Power gains and first strike capability so she can break away from her Tank positioning. Since Hououga has first strike control and harassing capability, with the adjustment to the mechanic of her Passive ability to provide output buffs to herself and her teammates, we hope that she will also be able to take on the role of Tank-Support.

Passive effect: When Hououga’s abilities hit enemy shikigami, they will add a Nether Fire mark. Whenever any of Hououga’s attacks or allies’ basic attacks deal damage to targets marked by Nether Fire, the mark will stack, and their duration will be refreshed. Nether Fire marks will detonate upon reaching 5 stacks, dealing a large amount of magic damage to the target and reducing their healing effects. This effect has a certain cooldown against the same target.

Hououga casts a Firespark in the designated direction and moves to the first enemy shikigami hit, reducing their Attack Speed for a certain period of time and dealing magic damage to enemies in its path.

The HP and damage data of phoenix fire will now be affected by Ability Power bonus.

In the current version, as the buffs dropped by the new boss Sougenbi are too random, players are unable to predict the direction of the buff, leading to low willingness to kill Sougenbi. Hence, we will adjust the drop rules of Sougenbi’s buffs.

Yamausagi’s Christmas Carol series skin, Winter Sleigh, will make its return to the Skin Shop for a limited time! It will be available from December 18th, 2020 to December 31st, 2020. Don’t miss out! 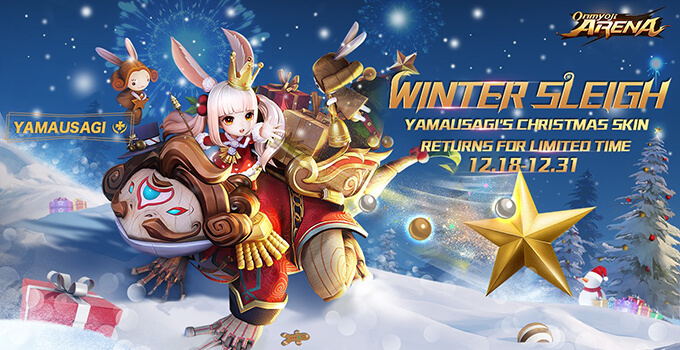 My Favorite Shikigami of the Year

Using the topic #Favorite Shikigami of the Year#, show off your favorite shikigami and talk about why you like them on Netease Dashen to win epic skins, Skin Token Vouchers, and Love Packs.

During the event, complete daily quests to obtain Christmas Stockings. Open for a chance to get Wish Ema and other rewards. Log in for a total of 6 days to get an exclusive avatar frame.