We will change the lineup of the limited-time free shikigami at 5:00 AM on March 14th, 2022. The new free shikigami will be Tesso, Bakekujira, Ebisu, Vampira, Inugami, Tamamonomae, Lord Arakawa, and Puppeteer.

Onmyoji who own the God of Fortune Month Pact will have the additional free shikigami, Miketsu and Hououga.

Of these shikigami, Lord Arakawa and Puppeteer have a difficulty of Hard. Onmyoji who have been in Heian-kyo for less than 7 days can’t use them in battle for free.

Hakuzosu’s Moon Peak series skin, Moon: The Fool is now available! Get 12% off from March 11th after maintenance to March 17th, 2022. Don’t miss out! 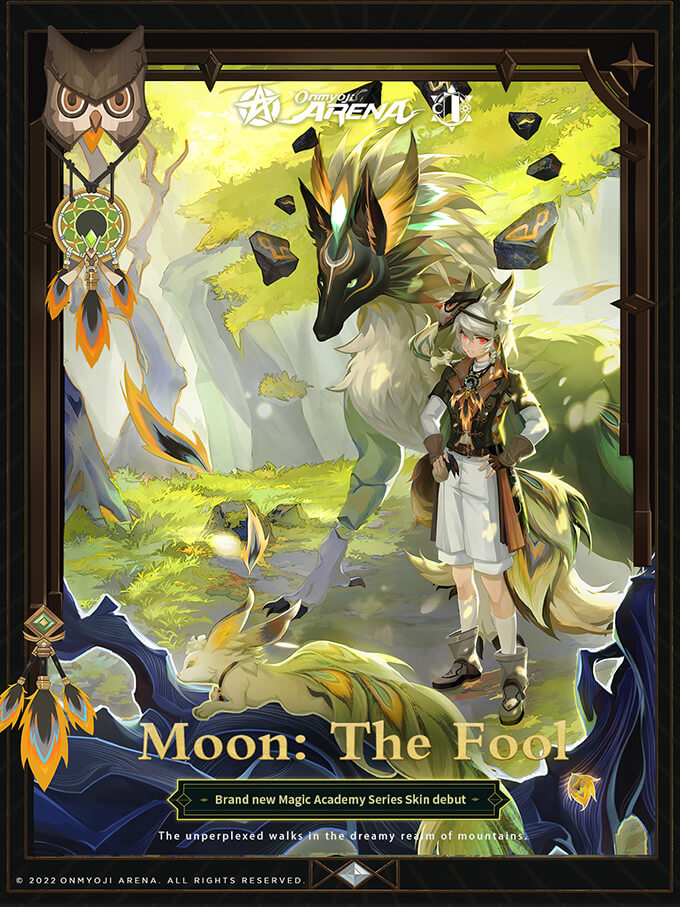 Izaya’s current overall performance is relatively weak and the crowd control of her Ultimate Ability: Ceaseless Cycle has not been showcased well. Therefore, we have decided to make some adjustments.

Adjusted the Ability Power bonus of Disaster’s shut down damage from 50% to 60%.

Shouzu’s protection capability considerably surpasses those of similar Support shikigami and her multiple-stage Knockback makes it difficult for shikigami with charging displacement abilities to approach and counter her, so we have decided to weaken her control effects.

Adjusted the duration of Tidal Wall from 6 seconds to 5 seconds.

No longer inflicts a Knockback effect.

Asura’s multi-stage displacement and Haste Effect when Rationality reaches 0 enable him to deal with ganks from enemy shikigami too easily. Therefore, we have suitably adjusted his flexibility.

Movement Speed Bonus is halved if there are no enemies in front of him.

Ootakemaru’s excessive speed in jungling allows him to gain an advantage in terms of income and level with ease and get an upper hand in the early game. This means the enemy jungler will completely lose their control in the jungle. Meanwhile, Ootakemaru’s teamfight performance is relatively weak in the late game. Therefore, we have decided to weaken his jungling abilities and enhance his late game strength.

New: Increases the maximum damage instances of the thunderstorm from Ability 1 Hillcry: Thunder by 1/2/3 times and its duration by 0.1/0.2/0.3 seconds.