Onmyoji Arena will change the lineup of limited-time free shikigami on May 27th, 2019. The new free shikigami will be Yamausagi, Futakuchi, Tanuki, Yamawaro, Enenra, Ryomen, Kubinashi, Yoto Hime and Maestro.

Of these shikigami, Kubinashi, Yoto Hime, and Maestro have a difficulty of Extreme. Onmyoji who have been in Heian-kyo for less than 7 days can’t use them in battle. 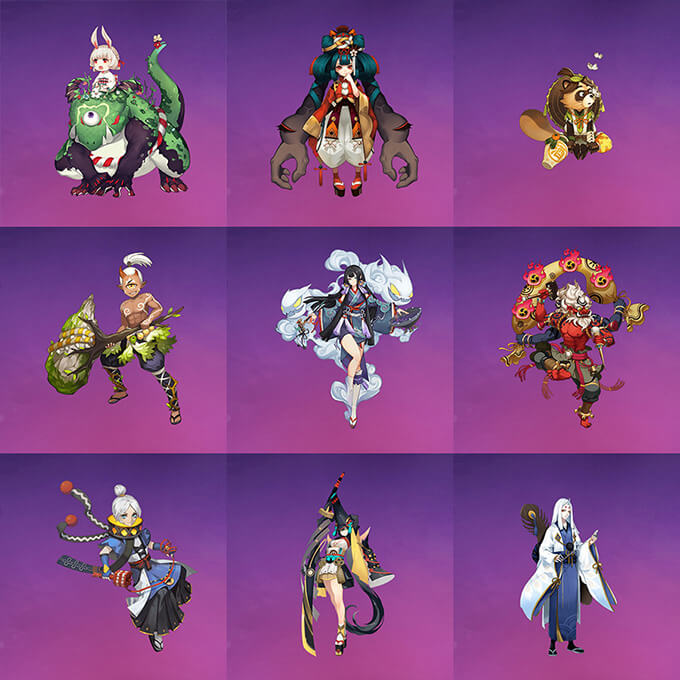 When Dodomeki uses abilities to deal damage once to enemy shikigami or uses basic attacks to deal damage 3 times to any enemy, 1 Ghost Eye will be opened. If 5 Ghost Eyes are opened at the same time, she will enter the Evil Light state for certain time, during which if she attacks an enemy with basic attacks, 5 Ghost Eyes will attack the target in turn with each one dealing magic damage.

During the duration time of Evil Light, if Dodomeki seals an enemy shikigami, Flaming Eye, Gaze and Deadly Gaze will be refreshed instantly.

Dodomeki releases a Haunting Eye in the specified direction to deal magic damage to enemies in its path. If she uses the ability again within a short time, she will quickly dash to the current position of the Haunting Eye.

Dodomeki releases Cursed Eye in the specified direction. Cursed Eye will create a Cursed Realm lasting after a short delay when arriving at its destination and inflict a Fear effect on enemies within its range while also dealing magic damage.

Dodomeki will first be available during this week’s Shikigami Brawl.

Adjusted the hitbox width of water balls from 110 yards to 115 yards.

Removed: Can instantly use basic attack once after jumping and slashing.

Adjusted the stacked Attack when hitting a target with an ability from 3 (+0.5*current level) to (+8% extra Attack).

Adjusted max stacked layers from 4 to 5.

Adjusted the extra Attack bonus of Shield from 70% to 60%.

Shuten Doji’s skin of Great Spirit Arrives, Demonic Lord has been added. Enjoy 12% off during May 24 – May 30.

2. You can now share your Onmyodo and item set to Moments.