On December 18th, 2020, Arena of Valor will hold a Hotfix to perform some adjustments to Hero Balance. Please check the information below for more details. 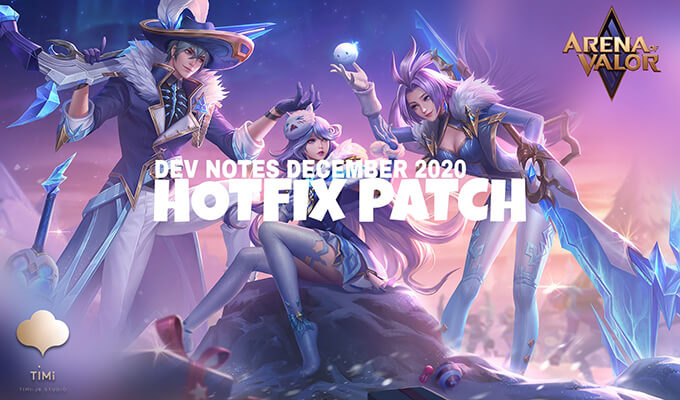 After our internal data, Mina is not a suitable option in the Dark Caesar Slayer lane, therefore, we are going to buff the damage of her first skill in the hope that more Challengers pick her as solo lane hero.

We feel like the recent changes to Laville – also known as Lavie – were too harsh. So we are buffing his base attributes to balance him more as a suitable hero that belongs to the mobility markspeople.

Lumburr’ global win rate is among the lowest in Athanor. Furthermore, the casting animation of the ultimate skill is too long for the effect of knock-up duration. Therefore we are going to buff the said-duration, in the hope that Lumburr rocks again.

After we have analysed our challengers, content creators and eSports feedback, we heard that Ryoma long-attack range, high-damage burst and control effects are too much in the current design. Therefore, we have decided to nerf the high-damage burst.

As our [TiMi Studios] general community manager Christopher Anjos talked in the Dev Diary already. Omega is our largest revamp in the history, please refer to the Dev Diary if you wanna know the story behind the changes.

The changes that we made during the redesign of Omega — Sage were on the paper interesting but for the Antaris Battlefield and Light vs. Shadow Battlefield too overwhelming. Therefore, we are nerfing his skills that provide additional movement speed to ensure that Omega doesn’t dominate the support lane and overshadows other support heroes. Additionally, we have nerfed his stun duration to minimise his overwhelming behaviour on the battlefield.

Ignis – The Anointed One (Adjust)